Is Jesus The Only Way To Heaven?

Last month’s blog poll “Is Jesus the only way to heaven?” results are in. Check out the graph below: 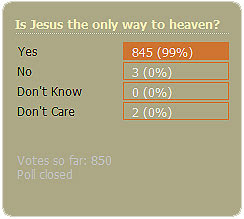 I can’t tell you how much joy it brings me to see 845 people in this apostate generation agree that Jesus is the one and only way to get to heaven. You deserve a “way to go!”

Last year I was subbing in an Adult Bible Fellowship and had an amazing ministry opportunity. A good friend of mine had his parents visiting and they were going to come to class with him. His parents were not church goers and believed that there are many ways to heaven. It happened that my lesson that day was on Universalism.

“What is Universalism?” you may be asking. Universalism is the belief that my friend’s parents have — that all religious expressions will get one to heaven, and that God is just too loving to send anyone to Hell. For the three that answered “No” in the poll and two that answered “Don’t Care,” the Lord must be giving me the same opportunity as that night with my friend’s parents. This entry is for you.

Can Jesus really be the only way?

Not only CAN He be the only way, Jesus stated He IS the only way. “Jesus answered, ‘I am the way and the truth and the life. No one comes to the Father except through me'” (John 14:6). Jesus also said, “Whoever believes in the Son has eternal life, but whoever rejects the Son will not see life, for God’s wrath remains on him” (John 3:36).

Jesus accomplished creating the way to Heaven by His death and resurrection on the cross. Mankind has rebelled against God by sinning and is therefore no longer holy in His sight. Romans 3:23 states, “all have sinned and fall short of the glory of God.” To bring a person back into holiness, “God made him [Jesus] who had no sin to be sin for us, so that in him we might become the righteousness of God” (2 Cor. 5:21). A person needs only to believe in Jesus as the Son of God and accept His free gift of salvation. “That if you confess with your mouth, ‘Jesus is Lord,’ and believe in your heart that God raised him from the dead, you will be saved. For it is with your heart that you believe and are justified, and it is with your mouth that you confess and are saved” (Rom. 10:9-10). Your own works won’t get you there, “For it is by grace you have been saved, through faith—and this not from yourselves, it is the gift of God — not by works, so that no one can boast” (Ephesians 2:8-9).

I’ve known a number of people who hold to universalism, and a common belief they hold is that they feel they are already good and without sin. But, 1 John 1:10 states, “If we claim we have not sinned, we make him [Jesus] out to be a liar and his word has no place in our lives.” Remember Romans 3:23, “all have sinned and fall short of the glory of God.”

Also, Universalists generally do not believe strongly in any religious faith. They ride the fence, so to speak. Having some knowledge of what other religions believe would help in their understanding that all religions are at odds with each other. The chart below demonstrates the different major religious viewpoints: 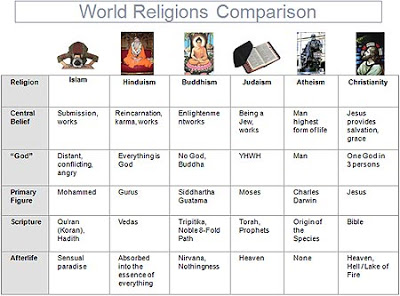 Take the concept of God for instance. Muslims believe in a god called Allah, who is distant and inconsistent. Hindus believe everything is God. Buddhists don’t believe there even is a God, though some believe Buddha himself achieved godhood. Atheists also believe in no God, but place man as the highest of creatures. Christians believe in one God in three persons. Each of the major religions has totally conflicting views of deity.

Or, take the requirements for salvation. In all but Christianity, good works are needed to achieve whatever their view of the good afterlife is. Only Christianity depends on Jesus’ work of salvation alone.

Finally, Universalists believe that God is just too loving to send anyone to Hell. God is a God of love, “For God so loved the world that he gave his one and only Son, that whoever believes in him shall not perish but have eternal life” (John 3:16). But, God is also a God of justice, and all who rebel and reject His Way get what they desire — eternal separation from God in the punishment originally made for the demons, which is the Lake of Fire (Rev. 20:10-15).

I picture many people’s reaction to Jesus being the only way as something like this: A man is stranded out in the middle of the ocean, starving, tired, sharks are nipping at his feet, and he is about to go under. Up sails a mighty vessel. The man sputters weakly in the water for help. On the ship the captain orders his exec to toss the poor man a life preserver and reel him in. The life preserver is thrown in. The man stares in amazement at the life preserver and yells up to the ship, “Do you have any in green?” “What?!?” yells back the officer, “Take it! There’s a shark by you.” The man yells back again, “Or, how about a square life preserver.” The officer is incredulous. The man tries to swim over to the ship, but lacks the energy to make such a journey. He drowns and is then gorged on by sharks.

How can the man be so silly when his life is on the line? Well, that is how we act when we reject the life preserver God sends us in His son Jesus. Man dislikes the option and seeks another option when there is just no other option. The result is always the same when seeking one’s own way to safety — death.

Truths to Live By

Here are four truths from God to remember when in the universalistic mindset:

Different religions do not all lead to God, because each “God” is totally different in each religion. Only Christianity shows that man cannot do enough to get to Heaven, and that an approachable and loving God is the only One to provide the way.