How did the Gaza Conflict end? 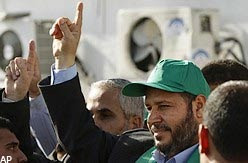 In response to over 6,000 rockets being fired into southern Israel by Hamas militants since 2005, Israel launched Operation Cast Lead in December 27, 2008, in an attempt to stop the rocket fire, make their southwestern border more secure, and cripple Hamas enough to end their barrage. A day before Barack Obama was sworn in as President of the United States, Israel ceased their air strikes and brought home their ground troops, signaling to the world that the conflict was over.

In January’s blog poll, “How will the Gaza Conflict end?,” people’s views were sought on how they believed the battle between Israel and Hamas-controlled Gaza would end. Did the 233 respondents accurately reflect in the graph below the end of the conflict? 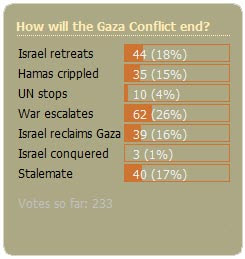 The answer to that question is very hard to discern. Who actually won and what was actually accomplished has left the whole world scratching their heads over these questions.

Did the United Nations put a stop to the conflict? Ten (4%) of the respondents polled believed this would be the outcome. While this clearly didn’t happen, the United Nation’s pressure did force Israel to expedite their maneuvers before a U.N. censure was enacted or peace keeping troops were inserted. So, in a way, the U.N. did help bring the conflict to an end.

Would the war escalate, bringing in other nations into the foray? Sixty-two (28%) believed this would be the outcome. A number of Bible prophecy students especially were keeping a keen eye out for this outcome, looking to see if a Psalm 83 subjugation of Israel’s neighbors was in the making. At least for this Gaza Conflict, escalation didn’t occur.

Would Israel reclaim Gaza? Israel evacuated its settlers and abandoned millions of dollars of agricultural bounty in the attempts at gaining peace for trading land. What Israel gained instead was rockets lobbed daily at them from their former farms and villages. Israel clearly did not take Gaza back (what’s left of it after the Palestinians razed the greenhouses upon taking the lease). Surprisingly, Israel didn’t even leave a contingent in Gaza as 39 (16%) guessed the outcome would be.

Would Hamas conquer Israel? Three (1%) of the respondents saw this scenario. Thank you, our Muslim friends, for your usual grasp on reality!

Did Israel retreat as 44 (18%) of the respondents believed would happen? You bet right! The current leadership of Israel surprised the whole world by producing a backbone and making the incursion into Gaza, but extracted it again by retreating from the battlefield and implementing a unilateral ceasefire, coincidently (?) timed with Obama’s inauguration. It is this retreat by Israel that is the center of confusion over whether the operation really ended in a stalemate as 40 (17%) believed would happen, and if Israel had actually accomplished their objective in crippling Hamas as 35 (15%) believed would happen.

A stalemate would mean both sides laid down their arms because victory was impossible for each. And yet, amidst the rubble of a supposed 1,300 Palestinians killed, 5,500 injured and 4,000 buildings destroyed throughout the Gaza Strip, Hamas leader Khalil al-Hayeh declared “We say proudly that Gaza has won the war, the resistance has won the war, and Hamas has won the war” (reported in The Jerusalem Post in Jan. 30, 2009). To prove they’re still in the battle, after the ceasefire Hamas remote detonated a road-side bomb and lobbed a few more missiles into Israel. They are now awaiting the newest shipment of arms from Iran to be released by Egyptian Suez Canal authorities so they can rearm and attack again. If this was a stalemate, then nobody told Hamas, so clearly this scenario didn’t play out.

And, has Israel achieved their objectives? With only 13 Israelis reported killed in the conflict, their leadership seems to think so. Hamas’ tunnel networks and rocket supply have been reduced considerably. But, in reality, Israel has only temporarily achieved their objectives. Hamas still has an iron control, abusing their fellow Palestinians like hostages. Aid pours into the country for rebuilding like never before, but Hamas intercepts it and uses the supplies and funds to rearm. In the Muslim world, the scrappy little resistance against the “Zionist regime” has won Hamas great honor. In the free world, though muffled comments did arise that Israel had the right to protect itself, the largest voice in the world led by U.N. Secretary General Ban-Ki Moon, shouted that Israel was the evil aggressor. By the end of the conflict, Israel lost the public relations war, a war Hamas is an expert at winning.

And so, how did the Gaza Conflict end? At this point, nobody can be sure it really has ended. But, if the pullout by Israel on January 19, 2009, is the deciding date of the end of the conflict, then it is over. By all appearances, Israel is the short-term winner, but the long-term loser, for Israel will have to fight this war again.