Day 8 of Lamb & Lion Ministries’ 2009 Israel Tour continues the marathon pace across the country. There is just so much to see that 10 days doesn’t do the country justice.

Today we focused on the Dead Sea region, the lowest point on land in the world. And, it isn’t called the Dead Sea for nothing. When God wanted to wipe Sodom and Gomorrah off the map due to “their sin so grievous” (Gen. 18:20), he made the Dead Sea a wasteland. The mineral runnoff into the Dead Sea has caused the water to be unlivable for any creature. Jewelry corrodes in just days and metal boats are eaten through in a matter of weeks. The adjacent cliffs are salt encrusted and barren. Fresh water is almost impossible to find. Flies buzz all around like on a carcass.

The Dead Sea is a dead testament to the severity of God’s judgment when mankind totally abandons morality. 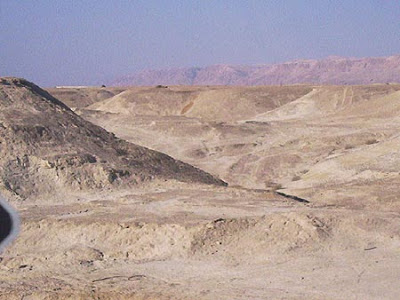 After leaving Jerusalem very early to avoid the noonday heat, we passed through the Judean Wilderness. This is the area Jesus went to fast for 40 days and resisted temptation (Matt. 4:1). 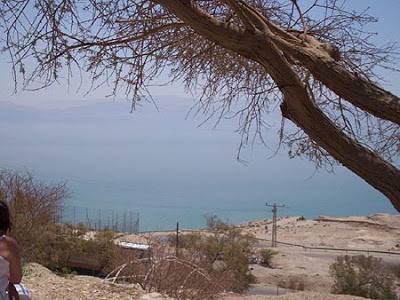 A view of the Dead Sea through the typical morning haze. 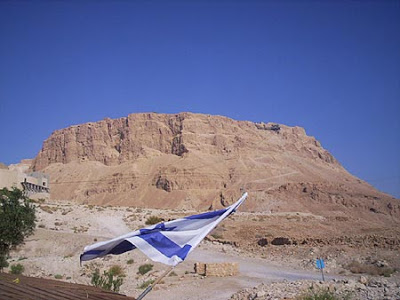 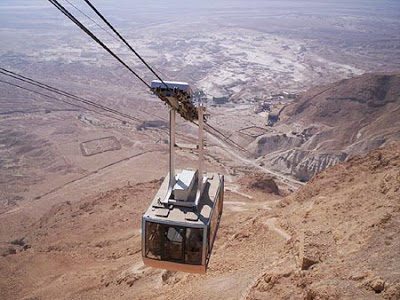 What the people of the First Century would have given for one of these cable cars. The alternative way up is a treacherous and long walk up the snake filled, winding path. 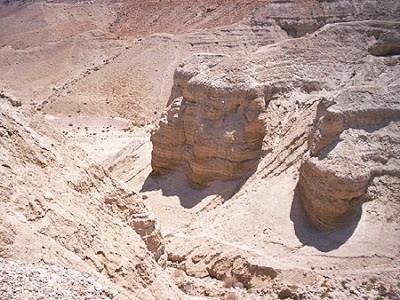 It may be a long way up, but you can’t get much better of a view of the desolate terrain. 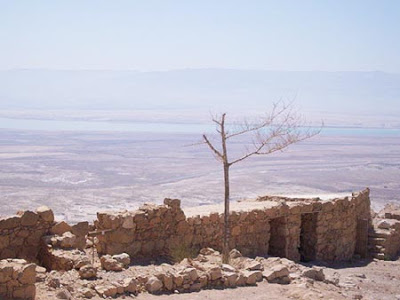 The ruins of the Masada fortress, and every Roman soldier’s nightmare assignment. 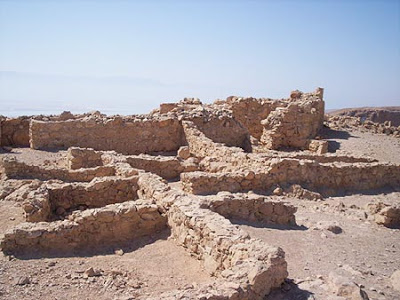 The last great holdout of Jewish rebellion from the 70 A.D. destruction of Jerusalem holed up in Masada. For almost two years nearly 800 Jews held off 8,000 Roman troops led by Flavius Silva (played by Peter O’Toole). 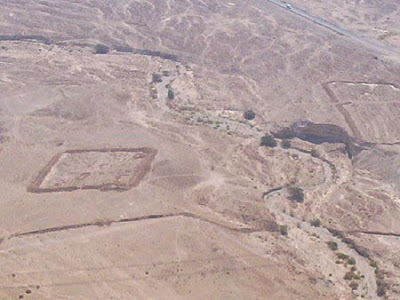 The Romans camped out at the base of the mountain, unable to scale the steep cliffs to reach the fortress. They were hot, tired and teed-off! 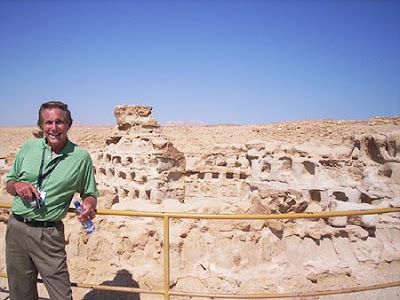 The Jews, meanwhile, had plenty of food and water stored from the flash floods that occur 3-4 times per year in the Dead Sea region to keep the Romans at bay. The Romans had to hike miles to draw water and return. Stephen shows us the Columbarium, which was like a chicken coop. The Jewish women would even hang their wet clothes off the side of the cliffs for drying to mock the thirsty soldiers. 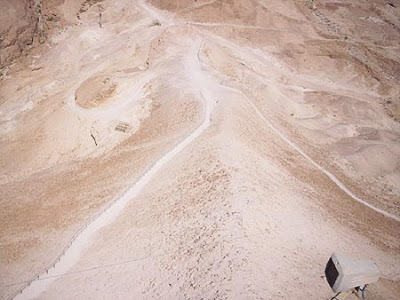 The Romans used thousands of captured Jewish slaves and had them stack rocks to build the largest seige ramp in history. They rolled up a seige tower and burned down the gate, along with their own seige tower. Rather than become Roman slaves and have their women ravished, the Jewish fathers killed their families and themselves. The Romans, expecting slaves and spoil, were left with nothing but a sour victory. The demoralized Tenth Legion Fretensis afterwards disbanded in disgrace. 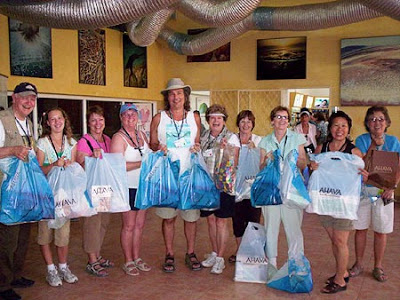 While a place of death, the Dead Sea’s minerals have many healing properties, and is a major component in Ahava moisturizers. Ahava will also corrode one’s wallet. 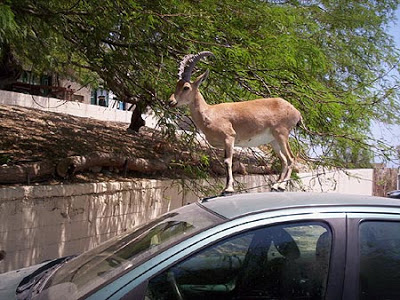 The ibex is commonly seen among the cliffs, and we observed, even on one’s car (Deut. 14:5). 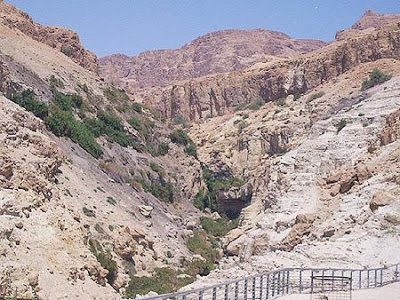 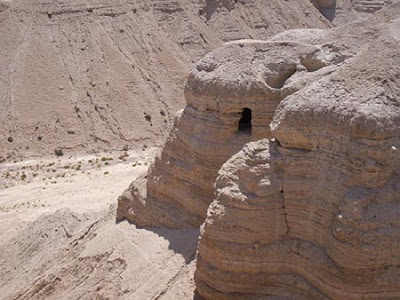 This is one of the caves that stored the Dead Sea Scrolls, the best evidence that the translations of the Old Testament that we have today are exact to the original texts. 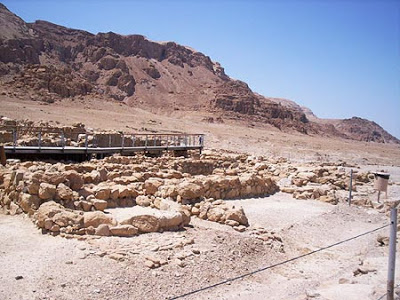 A sect called the Essenes sought purification in the desert and copied and stored all the books of the Old Testament but Esther. 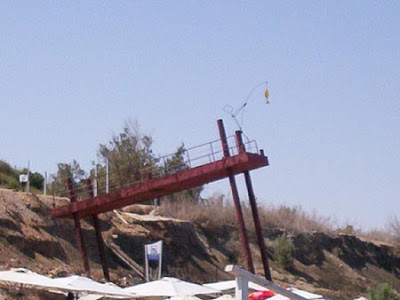 Due to water demands from Israel and Jordan, the Dead Sea has receded at an alarming rate, leaving this pier high and dry. 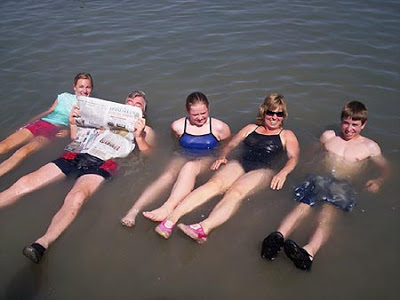 The waters are so full of minerals that people just float on the water’s surface, like our resident traveling family. Families that float together stay together. 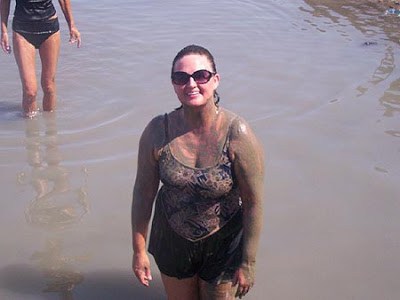 Teresa shows us how the mud can cure everything from arthritis (for up to two years) to athlete’s foot (not that she has either).

Everything we saw today — the death, destruction, desperation and desolation — will all be erased by Jesus Christ’s return and reign. The Dead Sea is therefore also a living testament that, though our lives begin desolate by sin and death, Jesus can give us life by having a saving relationship with Him.

Tomorrow for Day 9 we will like the wise men journey to Bethlehem.