Mark Hitchcock on the Factors Involved in 2012

Is the Mayan Long Calendar the only factor supporting the end-of-the-world 2012 scenario?

The Factors Involved in 2012

Dr. Hitchcock: The Mayan Long Calendar is primarily used as the basis of the 2012 phenomenon, but there are several other things that apply as well.

We do know that on December 21, 2012, even astronomers say there is going to be this alignment between the Earth and the Sun with the center of the Milky Way Galaxy for the first time in 26,000 years. The Mayan’s knew that, I mean, that is staggering that they knew that! The problem is they knew a lot about calendars and a lot about astronomy, but they didn’t know the future, and that is the problem with any end time date setting scenario.

Even their ziggurats were supposed to be living calendars. One of the largest ones they have has 91 steps on each of the four sides, and including the top, that equals 365 steps. On the spring solstice of March 21st every year at the big Kukulcán Ziggurat (pyramid) down in Mexico, when the sun hits it at 3 o’clock in the afternoon, the shadow on it looks like a serpent that wiggles down the stairs and comes down to this big serpent head at the base. The Mayans were able to position the ziggurat where that shadow would move to the right place— absolutely stunning! 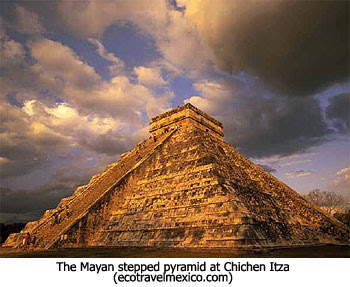 Besides the galactic alignment contributing the whole 2012 end date scenario, 2012 is supposed to a very active year for solar flares, which is factually actually going to happen.

Then you’ve got Nostradamus. He always seems to be everywhere all over the History Channel. You also have Bible codes. Some people point to computers and the Web Bot Project. They say that points to 2012 as well.

Back to galactic alignment, there really is going to be a galactic alignment of the Earth and the Sun which are going to be lined up for the first time they say in 26,000 years with the center of our galaxy, which means that the sun will temporarily block whatever energy comes from the center of the galaxy to the Earth. Of course, this is where all the speculation comes in about what that is going to cause. Some say the poles of the Earth will flip, which is basically the thesis of the 2012 movie that is out there. The flipping of the poles it is believed would cause worldwide devastations. That only adds a little bit to the fear of 2012 because there is actually something that is going to take place that people can point to.

Nothing has happened so far. But, it is one of those things that kind of puts enough little pseudo-science behind it that makes it more believable. Those who support a 2012 end time scenario can say there is going to be this galactic alignment that is going to take place.

There really is good science behind the solar flare idea. The Sun goes through sun spot cycles. Every 11 years there is a sun spot cycle. Some of them are much more dramatic than others. We are due supposedly for a very dramatic sun spot cycle. The last time there was one this dramatic was the last 1950’s, but that was back before we had satellites and a lot of the complicated electrical grid that we have today. And so, we really don’t know what is going to take place. There are some things that could happen related to that, but it is not going to be a mass extinction event.

Solar flares could act like an electromagnetic pulse which would interfere with the electrical grids or satellites and things of that nature. This is legitimate because NASA has actually issued a warning about this, and we need to take these things seriously.

Also, the Earth is protected by our atmosphere from solar flares, so it’s not like they are going to erupt and melt the planet or anything. At most it is going to be electrical disruptions. Now, how large they will be, no one knows. If there is enough disruption of the electrical grids it could be significant, but again it won’t be a mass extinction event like so many are saying.