Are you on Facebook? Statistically, chances are “of course” is the most likely answer you’ll be giving.

Boasting over 400 million active users, Facebook is THE social network phenomenon whose usership dwarfs the entire population of the United States (309,745,204 people as of this writing according to the U.S. Census Bureau). More than likely, you’re one of the million-fold masses.

DigitalBuzzBlog‘s “Facebook: Facts & Figures For 2010” shows that this modern marvel of communication and social connectivity has created a new era in which mankind communicates. From its humble beginnings cobbled together by students in a Harvard dorm in February of 2004, Facebook has amassed some staggeringly high statistics for 2010. 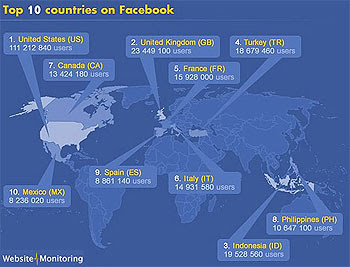 Facebook’s blend of technology, people and connectivity means power, and not just the power over private information. The real power behind Facebook is the ability to extend one’s ideological reach over a wider mass of people. This can be a power for good or for bad.

The best example of bad is the “Kill a Jew” Facebook Group. Started by a user named “Alex Cookson” and adorned with a big swastika as its profile image, this person created an event called “Kill a Jew Day.” As reported by The Jerusalem Post on July 5, 2010, the “Web site urged users to violence ‘anywhere you see a Jew’ between July 4 and July 22.” Cookson wrote, “You know the drill guys.” One user even commented, “Can’t wait to rape the dead baby Jews.” Another user posted images of corpses piled on one another, while a third posted quotes by Adolf Hitler.

This is the fourth anti-Semitic site taken down by Facebook within just a few days. Facebook spokesman Andrew Noyes commented, “Unfortunately ignorant people exist and we absolutely feel a social responsibility to silence them on Facebook if their statements turn to direct hate. That’s why we have policies that prohibit hateful content and we have built a robust reporting infrastructure and an expansive team to review reports and remove content quickly.”

Nevertheless, the damage was done. David Appletree, founder of the Jewish Internet Defense Force website (JIDF), reported that such efforts in online anti-Semitism “has already helped spur violent incidents, such as the 2007 assault on Holocaust author Elie Wiesel in San Francisco by a Holocaust denier, and the gun attack on the Holocaust Museu

m in Washington by a white supremacist armed with a rifle, which claimed the life of a security guard.”

That same power to connect ideas to people which man can use for evil, can be used for good as well, and for God.

Take the Christ in Prophecy Facebook Group. With almost 1,900 people engaged in sharing the blessed hope of Jesus Christ’s soon return, discussing Bible prophecy, sharing prayer requests, witnessing to visitors, and hashing out the tough doctrines and issues — this group has connected people from all over the planet who never would have met otherwise. It gives believers in Christ Christian connectivity and unites the brethren in our common love of the Lord. It’s also a safe environment, moderated by a godly man who’s earned the title “Son of Thunder.” 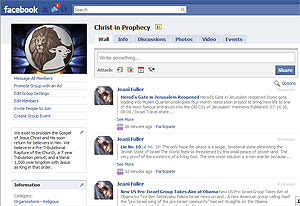 Should Facebook, as the JIDF has recommended, implement IP bans on people involved in posting inflammatory material, as well as call upon law enforcement to get involved, Facebook be subpoenaed, and the IP’s of the people threatening and inciting violence be obtained so that legal action can be immediately pursued? Or, should Facebook instead implement a passive filter that detects keywords which could prevent such “hate” pages from being loaded in the first place?

But, what of those who get it all upside down and hate good? Again, what is meant for good can also serve evil. What if the words “pro-life” and “Christian” and “Jesus” are found offensive (and they are to a growing and evilly vocal group), and end up being censured?

Long before Spiderman’s Uncle Ben said “with great power comes great responsibility,” Jesus pointed out in Luke 12:48, “From everyone who has been given much, much will be demanded; and from the one who has been entrusted with much, much more will be asked.” Believers in Christ have been given much with Facebook, and we should use this far-reaching phenomenon for good while being good is allowed in these darkening times.