Jerusalem is the Center of the World 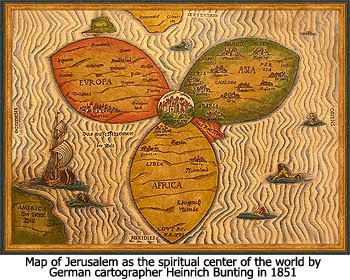 Is Jerusalem really the center of the world?

The claim that the earth was not the center of the universe proved to be true geographically, but not spiritually, right?

Nathan Jones: That’s correct! The Bible clearly teaches that this earth is the center of the universe spiritually, for it is the focus of God’s plan of redemption. It is on this planet and in the city of Jerusalem that God’s Son, Jesus, died for our sins. And, it is that same city of Jerusalem that Jesus has promised to return and reign over all the world.

Dr. Reagan: In 1581 a German cartographer by the name of Heinrich Bunting made an interesting map. He knew the world was not shaped like this, but because he was also a professor of theology he drew it in a way to illustrate the biblical teaching that Jerusalem is the center of the earth spiritually.

Nathan Jones: The prophecy which tells us the Messiah will return to Jerusalem can be found in Zechariah 14. The passage says that when Jerusalem is about to fall to the Antichrist and his forces in the end times, the Messiah will return to the Mount of Olives in Jerusalem. It says that when His feet touch the Mount, a great earthquake will split the mountain in half. Jesus will speak a supernatural word, and the Antichrist and his forces will be instantly killed. And, in verse 9, it says that on that day Jesus will begin to reign over all the earth from Jerusalem.

Dr. Reagan: Incidentally, that is the reason the Mount of Olives is covered with tens of thousands of graves. The Orthodox Jews may not believe in Jesus as their Messiah, but they do believe the prophecy of Zechariah 14 that their Messiah will come to earth on the Mount of Olives. Therefore, they desire to be buried on that Mount so that they will be the first to be resurrected.

Dr. Reagan: We are living on borrowed time because Jesus is about to return. One hundred years ago there were no tangible, measurable, definitive signs that pointed to the Lord’s soon return. Today, they are everywhere.

Nathan Jones: The most important signs are those that relate to the nation of Israel, for Israel is the cornerstone of end time Bible prophecy. Four prophecies in particular clearly identify our day as the time of the season of the Lord’s return. They are:

Dr. Reagan: And those are not the only end time prophecies being fulfilled in these days. Two others I would mention are:

We hope this has helped to open your eyes to the marvels of Bible prophecy and serve to motivate you to study God’s Prophetic Word.