The Beginning and the Ending: Evolutionary Attack 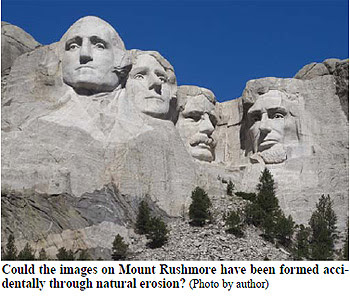 The whole theory of Evolution is the greatest fairy tale ever concocted by the depraved mind of Man.

The complexity of both the universe and life attests to intelligent design and the necessity of a Creator. To deny this is equivalent to standing in front of Mount Rushmore and saying, “Wow! Isn’t it amazing what can be accomplished accidentally by erosion?”

A scientist would write off such a person as insane. Yet, that same scientist will then turn around and argue that both the universe and life evolved accidentally. It is no wonder that Ray Comfort wrote a book entitled, You Can Lead an Atheist to Evidence, But You Can’t Make Him Think.9

Take, for example, the theory that the creation of the universe began billions of years ago with a Big Bang. This theory is based on supposed evidence that the universe is expanding.

But the Bible has an explanation for this. Eleven times we are told in the Scriptures that God “stretched out the heavens” from the point of creation. Here is one example taken from Isaiah 42:5 —

“Thus says God, the Lord, who created the heavens and stretched them out, who spread out the earth and what comes from it, who gives breath to the people on it and spirit to those who walk in it…” (ESV)

If the universe truly is expanding, then it is most likely left over momentum from God’s stretching of the heavens.

The whole idea of the universe originating from a “big bang” explosion is preposterous. Let me ask you a simple question: How many explosions have you ever witnessed or have heard of that produced order instead of chaos?

And how many explosions have ever occurred from nothing? In that regard, I love a poster I discovered recently that pokes fun at the Big Bang Theory. It says, “In the beginning there was nothing — which exploded.”

The whole idea of the universe and life originating from an explosion is as absurd as thinking — as some Evolutionists have postulated — that if you would only give 10,000 monkeys enough time, they would eventually produce the entire works of Shakespeare by randomly tapping the keys on typewriters!

And concerning the Theory of Evolution, it is just that — a theory. The scientific method requires observation. No scientists were present to observe the creation of the universe or life. The only one who was present has revealed to us in His Word how it happened.

The reality is that the advocates of the Theory of Evolution have been running for cover ever since the discovery of DNA and its incredible complexity. Thus, Richard Dawkins, one of the world’s leading evolutionists, recently said that his current best guess is that life on earth either came here floating on crystals in space, or else it was planted here by aliens.10

The bottom line is that these so-called scientists are unwilling to admit the existence of a Creator God because then they would be responsible to someone.

The Bible sums it up best. In the Old Testament it says, “The fool has said in his heart, ‘There is no God'” (Psalm 14:1). In the New Testament it says: “Even though they [speaking of ungodly people] knew God, they did not honor Him as God… but they became futile in their speculations… Professing to be wise, they became fools” (Romans 1:21-22).

The Days of Genesis 1

Let’s return to the biblical text. We are told in Genesis 1 that God created the universe and life in six days and then rested on the seventh. How do we know they were six twenty-four hour days? The answer is simple. We know the text is speaking of 24 hour days, because it says so! Each day is described literally as an “evening and a morning.”

The fact that the Genesis account is speaking of 24 hour days is affirmed in Exodus 20:8-11 —

8) Remember the Sabbath Day, to keep it holy.

9) Six days shall you labor and do all your work,

10) But the seventh day is a Sabbath of the Lord your God; in it you shall not do any work.

11) For in six days the Lord made the heavens and the earth, the sea and all that is in them, and rested on the seventh day…

And how do we know all this happened only about 6,000 years ago? Because the biblical genealogies going back to Adam and Eve cover a time span of only 6,000 years from today’s time.

In this regard, I think it is interesting to note that the Bible is the only written account of human civilization that provides historical information before the flood of Noah that took place some 4,300 years ago. All other records of human history, such as the Chinese and Egyptian, date back only to the time of the flood.

But what about carbon dating? Hasn’t it revealed human skeletons much older than 6,000 years, as well as animals like dinosaurs that are even millions of years old?

The problem with carbon dating is that it is based on evolutionary assumptions — the primary one being the principle of uniformitarianism, which is the scientific theory that life on earth has been uniform ever since the beginning and therefore the carbon content in the atmosphere has always been the same.

Even those who put their faith in carbon dating will admit that if there ever was a world-wide flood, then all carbon-dating is inaccurate. But they deny the occurrence of any such worldwide catastrophe, even though there is overwhelming evidence of it throughout the earth and there are references to it in the folk lore of all ancient civilizations.

In the next part of this series on the beginning and the ending of the Bible, I’ll look at why the Bible knew science before scientists ever did.