The Promise of Victory: Over Death

In our quick, overview look at God’s Plan for the Ages, we are looking at the four major prophesied triumphal events on the horizon that we as born again children of God can look forward to. In our last segment we addressed the Second Coming and the Millennium. We will now look at the fourth event — Heaven.

The final stage of God’s Plan for the Ages will come at the end of the Millennium, when we will be presented with our Heavenly home.

The Redeemed will be removed from this planet to the New Jerusalem which Jesus has been preparing for us. And I suspect that from that vantage point, we will be able to watch the greatest fireworks display in history as God superheats this earth to burn away the pollution of Satan’s last revolt.

Out of that fiery inferno will come a new heaven and a new earth that will serve as our eternal abode.

That’s right, Heaven will be on a new earth. We will be lowered down inside the New Jerusalem to the new earth, and God Himself will come to earth to live among us.

Here’s how it is described in Revelation 21:

2) And I saw the holy city, new Jerusalem, coming down out of heaven from God, made ready as a bride adorned for her husband. 3) And I heard a loud voice from the throne, saying, “Behold, the tabernacle of God is among men, and He will dwell among them, and they shall be His people, and God Himself will be among them,

5) And He who sits on the throne said, “Behold, I am making all things new.” And He said, “Write, for these words are faithful and true.”

6) Then He said to me, “It is done. I am the Alpha and the Omega, the beginning and the end. I will give to the one who thirsts from the spring of the water of life without cost.

7) “He who overcomes will inherit these things, and I will be his God and he will be My son.”

Notice the one to whom all these promises are made: the overcomer. In 1 John 5 we find a definition of an overcomer:

5) And who is the one who overcomes the world, but he who believes that Jesus is the Son of God?

If you have put your trust in Jesus as your Lord and Savior, then you are an overcomer, and you are an heir of all these promises.

According to Revelation 22:4, we will “see God’s face” — which means we will have intimate fellowship with our Creator eternally.

And Revelation 22:3 says we will “serve Him forever.” Yes, we are going to have meaningful and fulfilling things to do in service to our Creator.

In summary, let’s look at an overview of God’s Plan for the Ages as illustrated in Figure 2. 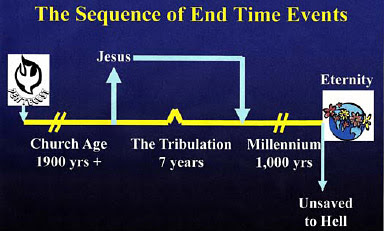 The Glory of the Victory

Now I hope you can better understand the meaning of two great passages written by the Apostle Paul.

First, Romans 8:18: “I consider that the sufferings of this present time are not worthy to be compared with the glory that is to be revealed to us.”

He repeats this sentiment in 1 Corinthians 2:9-10 where he writes: “No eye has seen, no ear has heard, nor has the mind of Man conceived what God has prepared for those who love Him.” But in the next verse, he adds that these glorious things have been revealed to us through His Spirit — speaking, of course of His Word.

In like manner, the Apostle Peter referred to the events we have surveyed as “God’s precious and magnificent promises” (2 Peter 1:4).

When you consider the details of God’s Glorious Plan for the Ages, how can you possibly be passive or apathetic?

We are promised victory, and it will be achieved with: The Rapture, The Second Coming, The Millennium, and Life Eternal with God in Glorified Bodies on a New Earth.

Clouds of darkness may be gathering around us, but the Light is about to break through.

It is the worst of times, but it is the best of times, for the signs of the times are shouting the good news that Jesus is coming soon!

In response, you and I should be shouting, MARANATHA! Come quickly, Lord Jesus!