Importance of Bible Prophecy: Scoffers and a Feast

I pointed out earlier that in 2 Timothy 3:16-17 Paul writes that all of God’s Word is “profitable for teaching, for reproof, for correction, and for training in righteousness.” I want to emphasize again that this admonition includes God’s Prophetic Word. Also, in 1 Thessalonians 5:20 the apostle Paul pleads with us to treat prophecy with respect: “Do not despise prophetic utterances.”

Peter warns us in his second epistle, that one of the signs of the end times will be the appearance of “scoffers” who will cast scorn and ridicule on the promise of our Lord’s return (2 Peter 3:3ff). The great tragedy of our day is that many of the loudest scoffers are religious leaders who profess to follow Christ. Such leaders crucified Jesus the first time He came. They now scoff at His promise to return.

A good example of what I’m talking about is the “Jesus Seminar”4 that began meeting in 1985 and whose work culminated in 1993 with the publication of a book titled, The Five Gospels: What Did Jesus Really Say?5 The seminar was composed of forty New Testament “scholars” from a great variety of Christian seminaries in America. The seminar met every six months to vote on the sayings of Jesus as recorded in the four ospels. The goal was to produce a new version of the gospels in which the sayings of Jesus would be color coded: red, if He said it; pink, if He may have said it; grey, if He probably did not say it; and black, if He definitely did not say it. 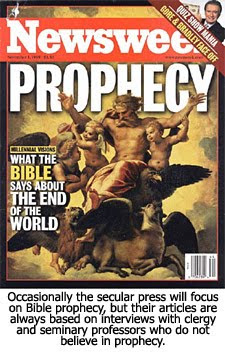 They titled the evil fruit of their labors, The Five Gospels, because they concluded that the spurious Gnostic Gospel of Thomas6 was as valid as the four Gospels adopted by the early Church Fathers.

When they voted on the sayings of Jesus regarding His Second Coming, they voted that all the sayings were spurious and had probably been “made up” by His disciples. What apostasy!

God’s Prophetic Word is food for our spiritual growth. We need to take it off the shelf, open it up, and feast upon it — and we need to do so with believing hearts.

The book of Revelation promises blessings to those who read it (or hear it read) and who obey it (Revelation 1:3). It is the only book of the Bible to promise such a specific blessing, but all God’s Word is designed to bless us spiritually (Psalm 119), and that includes the Prophetic Word.

Bible prophecy, properly taught, can literally transform a person and a congregation. This will happen if the person or congregation can be convinced of two things regarding prophecy: 1) Jesus is returning, and 2) His return could occur any moment.

Regarding the first point, most Christians believe with their minds that Jesus is returning, but they do not believe with their hearts, and therefore their belief has no impact on their behavior. Regarding the second point, most Christians are unaware that the return of Jesus will be in two stages — first, the Rapture, and then the Second Coming. Because they know little or nothing about the Rapture, they have no understanding that the Lord could truly return at any moment. They believe that many prophecies — like the preaching of the Gospel to the whole world — must be fulfilled before the Lord can return, when the truth of the matter is that there is not one prophecy that must be fulfilled for the Rapture to occur.

Again, if a person or congregation can truly be convinced that Jesus is returning any moment, they will be transformed because they will be motivated to share the Gospel with others and to commit their lives to holiness. A commitment to evangelism and holiness! What more could a pastor hope for?

Bible prophecy does not just relate to the future. It has an important spiritual relevance to the way we live our lives in the present.

4) Birger A. Pearson, “The Gospel According to the Jesus Seminar,” www.veritas-ucsb.org/library/pearson/seminar/js1.html.

5) Robert W. Funk, The Five Gospels: What Did Jesus Really Say? The Search for the Authentic Words of Jesus (New York, NY: Harper One, 1996).

6) The Gnostic Society Library, “The Gospel of Thomas,” www.gnosis.org/naghamm/gosthom.html.

Bible   Book of Revelation   Signs of the End Times