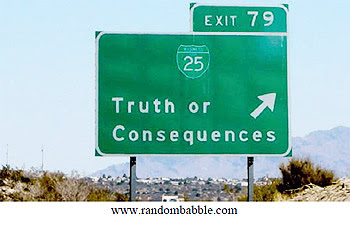 Whenever an issue like abortion is raised, those who believe in it always start arguing that there is no right or wrong concerning the issue. Everyone is entitled to their own opinion, and their particular opinion is that a woman should have “freedom of choice.” The right of a woman to kill the baby in her womb is considered to be a morally neutral action.

The mantra of the Post-Modern Era is the statement, “There is no such thing as absolute truth.” Truth is viewed as being relative. You have your truth, and I have mine, and neither of us have the right to declare that our truth is the absolute truth.

The list could go on and on, ad infinitum.

If you still do not believe in absolute truth, let me ask you some questions:

They reject absolute truth regarding sexual activity because they desire to be promiscuous and do not want to be held accountable. But absolute truth applies to sex. The Word of God proclaims that the only sex that is acceptable to our Creator is between a husband and wife. All other forms, whether fornication, adultery, bestiality, pedophilia, etc — all are immoral and thus a sin against God. That applies also to same-sex marriage.

The rejection of absolute truth regarding religion has become a modern day fad that is often expressed as, “There are many roads to God.” This statement is not only biblically untrue, it is also logically nonsensical.

We know, of course, that Christianity is the only way to God because Jesus Himself declared, “I am the Way, the Truth and the Life, and no one comes to the Father but through Me” (John 14:6). What Jesus said here is either a lie or the truth. If He truly was God in the flesh, then what He said is true. And we know for certain He was God in the flesh because He fulfilled over 100 Bible prophecies, because He was resurrected from the dead, and because He continues today to radically transform the lives of those who put their faith in Him.

There is a distinction between absolute truths in the physical realm and those that apply to morals. It has to do with what happens when the truths are violated.

In the physical realm a violation of the laws of nature will produce immediate results. Again, if you step off a roof, you will immediately fall to the ground.

The situation is different with respect to moral laws. If they are violated in secret, the only immediate result will be a feeling of guilt, unless the conscience has been seared. More drastic results may be delayed, but those results are inevitable. For example, an adultery may be discovered immediately, but on the other hand, it may continue for years without detection. But when detected, whether immediately or later, there will be painful consequences that those involved must face because an absolute law has been violated.

When it comes to the absolute moral laws of the universe — what are often referred to as Natural Law — they cannot be changed or overridden by man-made law. Men may pass legislation to legalize abortion or homosexuality, but that does not make either one moral or legal in the eyes of God.

At the Nuremberg War Crime Trials in 1945-1946, when we tried the Nazi leaders of World War II, each of them pleaded innocent on the grounds that they were simply following the orders of their government. We rejected that defense because we argued that national law cannot invalidate Natural Law. To kill innocent people simply because they were Jews was morally unjustifiable, even if the murders were ordered by the state and were therefore legal.

Our prosecutors at Nuremberg stood for the absolute truth of a Higher Law — what Man calls Natural Law, but is in reality the Law of God. We convicted the Nazi leaders of war crimes, and we executed them for violating the absolute truth, given by God, that murder is an anathema.

The Ten Commandments are an expression of absolute spiritual and moral truths. They were given to Man by God, not to enslave us with rules, but to liberate us from sinful consequences that can make our lives miserable.

The Commandments tell us that there is only one God, and that we are to worship Him, and Him only. Hindus worship thousands of gods — all of which are false gods — and the result is that their societies are characterized by superstition, fear, social injustice and extreme poverty.

The Commandments warn us about coveting. Our society has ignored this warning. The result is that we have become a materialistic people driven by greed. The more we get, the more we want. We are never satisfied with what we have. The results are discontent, white collar crime, addiction to gambling, and mental illness, among other dysfunctions.