Israel as Proof of God’s Existence: Reoccupation of Jerusalem 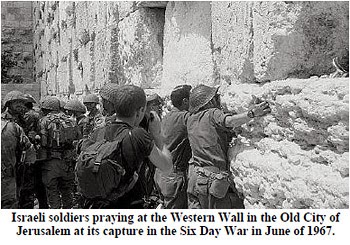 The sixth prophecy I want to identify is the one that states that when the Jewish people return to their homeland, they will reoccupy the city of Jerusalem, the ancient capital of their nation.

The Jews were dispossessed of their beloved capital city when the Romans destroyed it in 70 AD and took them into captivity. They briefly reoccupied the city during the Second Jewish Revolt that began in 132 AD, but after that, the city was never under their control again for century after century. Even after they declared the re-establishment of their state in 1948, they were unable to conquer the city in the War of Independence that followed.

But Bible prophecies had made it plain that the day would come when the city would be theirs once again. The prophet Zechariah spoke of that time:

4) Thus says the LORD of hosts, “Old men and old women will again sit in the streets of Jerusalem, each man with his staff in his hand because of age.

8) “and I will bring them back and they will live in the midst of Jerusalem; and they shall be My people, and I will be their God in truth and righteousness.”

These words were written 500 years before the time of Jesus, and they were written after the Jews had returned from Babylonian captivity and had resettled themselves in Jerusalem. So, this is a prophecy about a future resettlement in the city.

Again, in the 12th chapter of Zechariah, the prophet spoke of the Jews being back in the city of Jerusalem in the end times:

2) “Behold, I am going to make Jerusalem a cup that causes reeling to all the peoples around; and when the siege is against Jerusalem, it will also be against Judah.

3) “It will come about in that day that I will make Jerusalem a heavy stone for all the peoples; all who lift it will be severely injured. And all the nations of the earth will be gathered against it.”

Jesus Himself affirmed this prophecy in about 30 AD when He said:

“… and they [the Jewish people] will fall by the edge of the sword, and will be led captive into all the nations; and Jerusalem will be trampled under foot by the Gentiles until the times of the Gentiles are fulfilled.”

In other words, Jesus said the Jews would be taken into captivity to all the nations of the world and Jerusalem would remain under Gentile control until the time comes for the domination of the Gentiles to end.

The first step in the fulfillment of this prophecy came on June 7, 1967 at the end of the Six Day War when the Jews conquered the city of Jerusalem and reoccupied it with sovereignty over it, for the first time in 1,897 years.

It is no wonder that on that day, the chief rabbi of the Israeli army, Rabbi Shlomo Goren, came to the Western Wall, blew a shofar, and then proclaimed: “We have taken the City of God. We are entering the Messianic era for the Jewish people.”

He said that because he knew that the prophecies say that when the Jews are back in their land and in their city, the Messiah will come.

Once again, we have precise prophecies being precisely fulfilled.

The Reclamation of the Land

The seventh and final prophecy I would like to highlight is the reclamation of the land. As I have already pointed out, the land became a desolation when the Jews were dispersed from it, in fulfillment of Bible prophecy. But the Bible also contains prophecies about what will happen to the land when the Jews return. Here’s one from Ezekiel:

24) “For I will take you from the nations, gather you from all the lands and bring you into your own land …”

33) Thus says the Lord GOD, “… I will cause the cities to be inhabited, and the waste places will be rebuilt.

34) “The desolate land will be cultivated instead of being a desolation in the sight of everyone who passes by.

35) “They will say, ‘This desolate land has become like the garden of Eden; and the waste, desolate and ruined cities are fortified and inhabited.'”

In other words, God promised that when the Jews returned to the land, it would be reclaimed from being a wasteland and would become like the Garden of Eden.

And that is exactly what has happened. The swamps were drained. Trees were planted. Water was conserved and channeled carefully to the agricultural regions.

The result was that by 1950 the land had been reclaimed, and by the end of the 20th Century, Israel had become the bread basket of the Middle East, growing every kind of crop imaginable.

During the 20th Century the Jews planted 250 million trees, and Israel ended the century as the only nation in the world with more trees than at the beginning of the century.

In the ninth and last segment of our study of how Israel proves the existence of God, I’ll explain why Atheists cannot find God.