The Dispersion of the Jews: Worldwide Exile 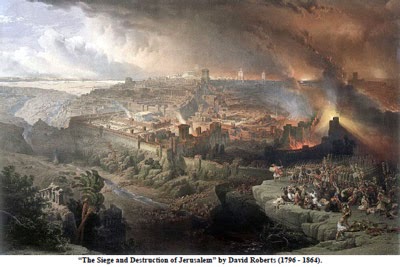 Shortly before the time of Jesus, in the late First Century BC, a Greek geographer named Strabo stated that you could not go anywhere in the civilized world without encountering a Jew.5 By the time of Jesus in the First Century AD, scholars estimate that the majority of the Jewish people (more than 5 million) were living in the Diaspora.6 The Egyptian city of Alexandria was 40% Jewish, amounting to approximately one million Jews.7

The widespread dispersion of the Jews at the beginning of the First Century AD is attested to in the New Testament. On the Day of Pentecost in about 30 AD, when the Apostle Peter preached the first Gospel sermon, a great multitude of Jews from the Diaspora had gathered in Jerusalem for the Feast Days (Acts 2:9-11):

9) Parthians and Medes and Elamites, and residents of Mesopotamia, Judea and Cappadocia, Pontus and Asia,

10) Phrygia and Pamphylia, Egypt and the districts of Libya around Cyrene, and visitors from Rome, both Jews and proselytes,

Also in the New Testament you can find a reference to “the Diaspora among the Greeks” in John 7:35. The book of James is addressed “to the twelve tribes who are dispersed abroad…” (James 1:1). Likewise, Peter’s first epistle is addressed to “those who reside as aliens, scattered throughout Pontus, Galatia, Cappadocia, Asia and Bithynia…” (1 Peter 1:1).

There is the story of the Ethiopian Eunuch in Acts 8. This was a Black Jew from Africa who had come to Jerusalem to worship. As he was traveling back home, he encountered a Christian evangelist by the name of Philip who shared the Gospel with him. The man accepted Jesus as his Savior, was baptized and went on his way rejoicing — becoming the first African convert to Christianity (Acts 8:26-40).

The Destruction by the Romans

In 63 BC, Judah became a protectorate of Rome, and in 6 AD, the kingdom was reorganized as a Roman province.8

Roman rule proved to be harsh. The Jews were heavily taxed, and their religion and culture were held in contempt. The Jewish people were particularly outraged when the Romans took over the appointment of the High Priest, resulting in the selection of Roman collaborators.9

“Ultimately, the combination of financial exploitation, Rome’s unbridled contempt for Judaism, and the unabashed favoritism that the Romans extended to Gentiles” brought about a revolt in 66 AD.10

The revolt led to a siege of Jerusalem by Roman troops in 70 AD. After a stand-off of almost six months, the Romans finally breached the walls and then systematically destroyed the city and its temple. In the process, they slaughtered tens of thousands of its inhabitants.

But this great tragedy failed to quell the rebellious spirit of the Jews. Fifty-two years later, they rose up in rebellion once again in a well-organized guerilla campaign that lasted three years (132-135 AD).

This revolt proved to be the last straw for the Romans. Hadrian, the Roman Emperor, responded brutally. According to Roman historian Cassius Dio (c. 150-235 AD), 580,000 Jews were killed, and 50 fortified towns and 985 villages were razed to the ground.11 Those who were not killed were sold into slavery.

Additionally, Hadrian ordered Jews to be banned from Jerusalem, except on the day of Tisha B’Av (the day of mourning over the destruction of the first two temples). He changed the name of Jerusalem to Aelia Capitolina (after his family name, Aelius, and the Capitoline Triad of gods — Jupiter, Juno and Minerva).12 And he changed the name of the Jewish homeland from Judah to Syria Palestina (Palestina being the Latin name for the Jew’s ancient enemies, the Philistines).13

The ultimate result of the destruction of the kingdom of Judah was the worldwide dispersion of the remaining Jewish people. Yes, there were small pockets of Jews who remained in their homeland, settling mainly in the Galilee and in the city of Tiberias. But the vast majority were scattered to foreign nations — all of which was in fulfillment of very specific warnings God had supplied through His prophets over a thousand years before. 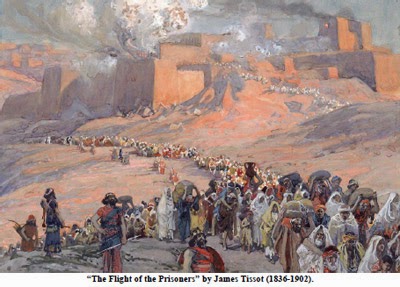 The Jewish historian, Josephus, writing near the end of the First Century AD, stated: “There is no city, no tribe, whether Greek or barbarian, in which Jewish law and Jewish customs have not taken root.”14

By the end of the Middle Ages (400 to 1400 AD), there were four identifiable groups of Jews in the Diaspora:

Each of these groups, in their isolation from each other over the years, developed distinctive forms of dress, worship and language.19 With regard to language, Hebrew became the language of the synagogue. It ceased to be spoken in daily conversation. Among the Ashkenazim, they combined German with Hebrew to produce a language called Yiddish.20 The Sephardim, on the other hand, combined Spanish with Hebrew to produce Ladino.21

In 1492, when the Jews were expelled from Spain, the Sephardic communities migrated to North Africa and throughout the Ottoman Empire. Later, some of them even went to the newly discovered Latin America.

This subsequent dispersion into the Ottoman Empire resulted in the growth of Mizrahi Jews, because that term came to be applied to those who ended up living in areas dominated by Muslims. As would be expected, they developed a mixed language called Judeo-Arabic.22

For 600 years, Babylon was the center of the Diaspora, from the 5th to the 11th Centuries. During the 11th Century, Jewish migration shifted the center of the Diaspora population to Spain, France and the Rhineland, where it remained until the 15th Century. At that point, expulsions and offers of refuge led the Jews either to Poland or the Ottoman Empire. Those two regions remained the principal centers of Jewish life until the 19th Century.

During the 19th Century, the Jews in the Diaspora began to migrate in significant numbers to the Western Hemisphere, including South America. Between 1840 and 1939, the Jewish population of North and South America increased from 1.1% of the world’s Jews to 33.1%.23 During that same time period, worldwide Jewry increased from 4.5 million to 16.7 million.24

In the fifth and last part of this series on the dispersion of the Jews, we’ll look at the prophecies related to the exile and return of the Jewish people.