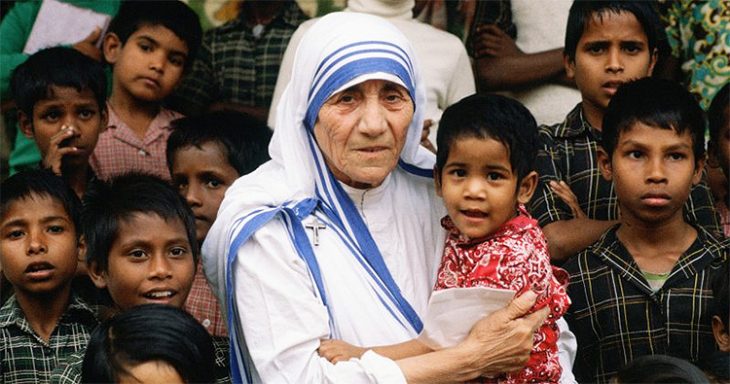 In September of 2016, Pope Francis declared Mother Teresa of Calcutta, India to be a venerated saint. This means that Catholics throughout the world can consider her to be holy, to be in Heaven, and to be trustworthy to pray to as an intercessor before God. Liturgies can be conducted in her name and churches can be dedicated to her.1

Being declared a venerated saint is the culmination of a canonization process that begins with what is called beatification. A person is beatified when he or she is declared by the Catholic Church to have led a holy life. To be elevated to the status of saint, two miracles must be attributed to the intercession of the beatified person after beatification is declared.2

“The core of beatification and canonization is the belief that very good people of the church go straight to Heaven, rule with Jesus, and intercede with God on behalf of the people on earth and in purgatory.”3 The whole process of beatification and canonization is completely extra-biblical, and the proclamation of certain persons as “venerated saints” is totally unbiblical.

The only saints mentioned in the Bible are those who accept Jesus as their Lord and Savior and who are born again, receiving the indwelling gift of the Holy Spirit. Accordingly, the Apostle Paul began his first letter to the Corinthian church by declaring that they were “…sanctified in Christ Jesus, saints by calling, with all who in every place call on the name of our Lord Jesus Christ…” Likewise, in Ephesians 2:19 Paul says that those of us who are believers in Jesus are all “…fellow citizens with the saints, and are of God’s household…”

The Bible clearly teaches that there are going to be special rewards for those who serve the Lord faithfully in this life, but those rewards are going to be distributed by Jesus when we are judged by Him about how we used our spiritual gifts to advance His kingdom (2 Corinthians 5:10). The Pope has no authority to distribute any special spiritual rewards.

As for Mother Teresa, there are grave doubts that she was even a Christian. One of her last requests before she died in 1997 was that all her letters be destroyed. They were not. Instead, they were collected and published in 2003 in a book titled, Mother Teresa: Come Be My Light.4 Her letters reveal a tormented soul who constantly doubted the existence of God and who had no personal relationship with Jesus.5

At the beginning of her ministry in Calcutta in the late 1940s, she wrote: “Where is my faith? Even deep down there is nothing but emptiness and darkness. If there is a God — please forgive me.”6 Eight years later she was still expressing “such a deep longing for God,” adding that she felt “repulsed, empty, no faith, no love, no zeal.”7 In 1959 she wrote: “What do I labor for? If there be no God, there can be no soul. If there be no soul then, Jesus, You also are not true.”8

These doubts persisted in her letters until her death. On one occasion she wrote: “I feel just that terrible pain of loss, of God not wanting me, of God not being God, of God not really existing.”9

Time magazine featured a cover article about her in its issue of August 23, 2007, which was titled, “Mother Teresa’s Crisis of Faith.” Her letters were summed up as presenting “a startling portrait in self-contradiction.” Her deeds in ministering to the poor “seemed inextricably connected to her closeness to God,” but in reality she “was living out a very different spiritual reality privately, an arid landscape from which the deity had disappeared.”10

Mother Teresa was fully aware of this dichotomy. In one of her letters she stated that her constant smile was “a mask” or “a cloak that covers everything.”11

The world — and most Catholics — would probably respond by saying, “So what?” They would argue that her beliefs about God and Jesus are irrelevant because of the incredibly good works she performed for the outcasts of this world. After all, she has been proclaimed as “the greatest humanitarian of the 20th Century,”12 and she was awarded the Nobel Prize in 1979 “for work undertaken in the struggle to overcome poverty and distress, which also contribute a threat to peace.”13

Tragically, what both the world and most Catholics cannot grasp is that good works — no matter how magnificent and glorious — are not sufficient to gain anyone access to Heaven. The only door to Heaven is Jesus who said, “I am the way, and the truth, and the life; no one comes to the Father but through Me” (John 14:6).

Mother Teresa ignored this truth in her ministry because she was content in ministering to the physical body only. She ignored the condition of the soul. And thus, she wrote: “We never try to convert those who receive [aid from her ministry] to Christianity, but in our work we bear witness to the love of God’s presence, and if Catholics, Protestants, Buddhists or agnostics become for this, better men — simply better — we will be satisfied.”14

It is comments like this that motivated Mike Gendron, an expert on Catholicism, to state that Mother Teresa “taught a bizarre ‘pseudo-pantheism’ in which she believed Jesus was present in everyone.” He then concluded that the Catholic Church has declared an “unbelieving agnostic to be a saint.”15

3) GotQuestions.com, “What is beatification and canonization and are they biblical?” https://gotquestions.org, page 1.

4) Mother Teresa, Come Be My Light: The Private Writings of the Saint of Calcutta (Danvers, MA: Image Catholic Books, 2009).

15) Heather Clark, “Mother Teresa Declared a Saint by Pope Francis After Being Credited With Miracles in Death,” http://christiannews.com, page 3.

Apostasy in the Church   Church and Ecclesiology   False Prophets