Is There Hope For America? 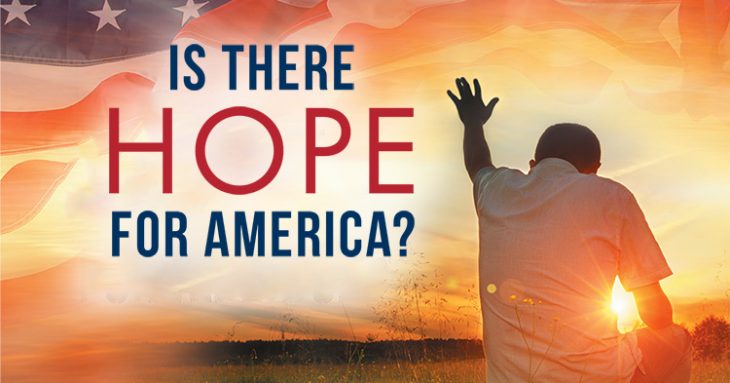 “Now as for you, son of man, I have appointed you a watchman… so you will hear a message from My mouth and give them warning from Me.” (Ezekiel 33:7)

Most pulpits in America are silent about our nation’s moral problems — and that has certainly been true. But there have been exceptions over the years, like pastors Erwin Lutzer and David Jeremiah. Robert Jeffress, pastor of First Baptist Church in Dallas, Texas, is another one of the exceptions. He has never feared to tread — and tread boldly — where few pastors have been willing to go.

I often think of him as the “Harry Truman of American pastors” because, like President Truman, he spits words like bullets and seems to have no concern about who might be offended. To him, the truths of God’s Word are more important than hurt feelings.

Jeffress began speaking prophetically about our nation in 2012 with the publication of his book, Twilight’s Last Gleaming. In 2013 he was invited to be the keynote speaker at the annual Bible conference sponsored by Lamb & Lion Ministries. At that conference, he presented a condensed version of the thesis of his book. The following is an excerpt of Dr. Jeffress’ message warning America of impending judgment and calling us all to repentance.

The Implosion of America

The demolition people met with me, and they said the best way to achieve this is through an implosion. And they explained to me what they were going to do. They said, “We’re going to take 200 pounds of dynamite and attach it to key structural supports within those five buildings. We will then explode the dynamite, there will be a pause, and then the law of physics will take over. Without those foundational supports, the buildings will fall in on themselves under their own weight.” I said, “Well, that sounds pretty good to me. Let’s do it!”

Over the last 50 years our Supreme Court has made four explosive decisions that have so weakened the moral and spiritual structure and foundation of our country that our inevitable collapse is certain. Right now we’re simply living between that time of the explosions that have weakened our basic foundation, and the coming implosion.

Explosive decision number three was rooted right here in the Dallas-Ft. Worth Metroplex. It was the 1973 decision in the case of Roe vs. Wade. It is the decision that has resulted now in the murder of over 50 million children in the womb.

The economic repercussions of abortion pale in significance to the most heinous and disastrous result of abortion, and that is the certainty of God’s judgment. All you have to do is look at history and see how God has dealt with nations that kill their children. In the Old Testament God raised up the Assyrians and the Babylonians to judge Israel for participating in child sacrifice. During the Second World War God raised up the allied forces to crush Nazi Germany for taking children to the gas chambers by the train loads.

Looking at history, does anybody have to wonder how God is going to deal with a nation like ours that sanctions the killing of children?

The fourth explosive decision was Lawrence and Garner vs. the State of Texas in 2003. This is the Supreme Court decision that struck down our state’s anti-sodomy laws. It was the beginning of a domino effect that we see continuing today.

God knew what He was doing when He designed the family. Even though Supreme Court opinions change, even though culture changes, God’s Word never changes. He is the one who designed marriage and He knows how it best operates.

Since Dr. Jeffress’ speech was delivered in 2013, the Supreme Court of the United States has set off an additional explosion — its abominable decision in June 2015 to legalize same-sex marriage, making our nation’s implosion even more certain and more imminent.

It was a despicable day in American history when President Obama decided to celebrate this court decision by lighting up the White House in the colors of the Sexual Perversion Movement.

Dr. Jeffress concluded with a call for Christians to respond.

Now my point in citing these four cases is simply this: no nation that outlaws the acknowledgment of God in the public square, that sanctions the killing of unborn children and destroys the most basic unit of society, the family — no such nation can survive. The explosions have already occurred. The implosion is coming. We are simply living in the in-between-time.

Now the question is, “How are we as Christians to respond to all this?” I want to suggest to you that we turn to the words of our Lord and Savior Jesus Christ who told us exactly how we are to respond to a decaying culture. In Matthew 5:13 Jesus said:

You are the salt of the earth, but if the salt has become tasteless how will it be made salty again? It is good for nothing anymore except to be thrown out and trampled underfoot by men.

Jesus said our first responsibility as believers is to act as salt. Do you know that in Jesus’ day salt was a preservative? In the day before refrigerators, salt was the way to delay the decay of the meat. What salt did was simply give the meat a little longer shelf life. Eventually the meat would rot and would have to be discarded. The salt delayed that process.

What I believe Jesus is saying to us is, “We’re not going to prevent the destruction of America, but we can delay it so we have more opportunity to share the Gospel.” I therefore believe God has called us as Christians to stand up and push back against the tide of evil and immorality that is sweeping our country.

If you enjoyed reading this Chapter 12 sample of Dr. David Reagan’s newest book on God’s Prophetic Voices to America, consider ordering your copy today! The books runs 288 pages in length.