Deeper Insights Into the Resurrection of Lazarus (Part 1 of 2) 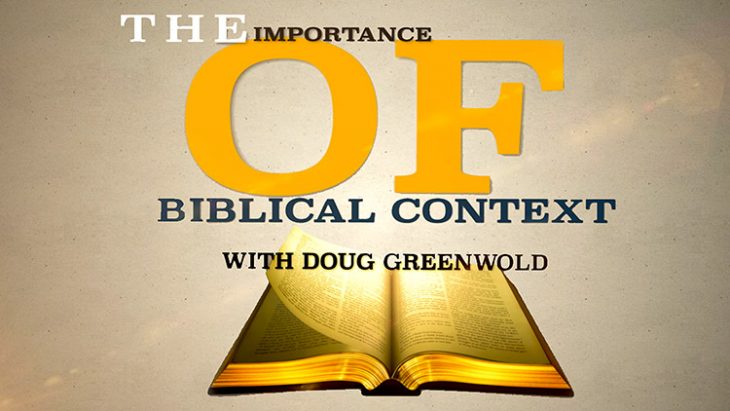 One of the most important principles of biblical interpretation is to keep in mind the context of what you’re trying to interpret. But, often this results only in attention being given to the grammatical context. We tend to overlook the cultural context, the historical context, and the geographical context, among other forms.

For a fascinating teaching which reveals the deeper insights concerning the resurrection story of Lazarus, we invited Doug Greenwold, a Bible scholar who serves as the senior teaching fellow for a ministry called Preserving Bible Times, to our television program Christ in Prophecy. Doug uncovers often missed insights into dramatic biblical stories by digging deep into the overall biblical context that provide poignant spiritual applications to the reader today.

Doug Greenwold: As we prepare for the celebration of Resurrection Sunday, let’s look at some contextual insights from the last days of Jesus’ ministry. We can learn so much more about the Crucifixion and the Resurrection from reading other Bible stories, such as the stories of Lazarus and Barabbas.

Let’s focus on the story of the resurrection of Lazarus, as told in John 11. This amazing story kicks off the last 40 days of the life of Jesus, that whole Passion of Jesus. I like to call the story of Lazarus the “greatest story never completely told.” The reason being, Lazarus seals the deal that Jesus is going to die.

But, first, let’s back the story up a bit. According to John 11, Lazarus was deteriorating rapidly. He was pretty sick. John 11:1-3 reads:

Now a certain man was sick, Lazarus of Bethany, the town of Mary and her sister Martha. It was that Mary who anointed the Lord with fragrant oil and wiped His feet with her hair, whose brother Lazarus was sick. Therefore the sisters sent to Him, saying, ‘Lord, behold, he whom You love is sick.'”

Jesus remains off in Perea, which is in the Jordan Valley on what would be today’s Jordan side of the river. Why do we know Jesus is there? Because it is winter. If you’re leading an itinerant outdoor ministry, you’ve got to be where it’s warm. Perea drops a thousand feet below sea level, and that means temperatures are like Palm Springs in the winter time. Jerusalem’s got snow. So, we know where Jesus was preaching at the time of this story.

I won’t take you through the arithmetic here, but Jesus was located two whole days away from Lazarus by walking, assuming a person at the time walked 16-18 miles a day. So, Mary and Martha see that Lazarus is deteriorating, and now a messenger enters this scenario who’s never mentioned by name. The ladies instructed the messenger to tell Jesus basically, “Go, and find Yeshua, and tell Him that the one He loves is sick.” As if Jesus doesn’t know this, right? They’re exerting a little manipulation there, using love. We certainly don’t attempt to manipulate Jesus in our prayers, do we?

So, the messenger is commanded to go and find Yeshua and tell Him that Lazarus was about to die. The messenger traveled for two days, and finally reached Jesus. He faithfully informed Jesus of Lazarus’ condition.

And here’s what’s fascinating! When Jesus heard the message, He replied in John 11:4, “This sickness is not unto death, but for the glory of God, that the Son of God may be glorified through it.”

Notice exactly the very first thing that Jesus did. He gave the messenger a promise. Jesus often does this when He’s going to stretch somebody’s faith. He provides them with a promise. Jesus first gave the messenger a promise, and then He gave the reason why what’s about to happen was going to happen. Jesus revealed that the story of Lazarus’ sickness would not end in death, rather it would be used for God’s glory so that God’s Son would be glorified through it.

Why tell the reader that fact? It’s because of what Jesus was about to do, otherwise you’d think He didn’t really love them. John 11:6-7 provides a shock, “So, when He heard that he was sick, He stayed two more days in the place where He was. Then after this He said to the disciples, ‘Let us go to Judea again.'”

Jesus stayed two more days in Perea! Has that ever caught your attention? Jesus didn’t leave right away. Imagine if your best friend was in hospice and you got a phone call at around 8 o’clock at night reporting, “He’s probably not going to make it through the night.” Would you wait two whole days before you went to visit your friend in hospice? Of course not! So, something puzzling was going on there.

Remember that we’re talking about God incarnate here, so everything Jesus does is strategic and for a reason. This is a deliberate delay so that God can be glorified.

Doug Greenwold: Let’s stop for a second and ask a few questions.

Where are we in the story? Mary and Martha and Lazarus lived in Bethany at the backside of the Mount of Olives some two miles from Jerusalem. Jesus, on the other hand, remained two whole days far away across the Jordan River, north a little bit in Perea.

What’s happened before? Another good question to ask. We know the Gospel records two particular miracles had already occurred. Two people had been brought back to life in the pages of the Gospels. The first was Jairus’ twelve year old daughter. The second resurrected had been the only son of the widow of Nain, found in Luke 7.

So, if you are Mary and Martha, these preceding miracles provide your paradigm. Yes, Jesus can bring somebody back to life. But, according to the examples, only if one died during the first day and only if Jesus come physically on site. Those would have been their expectations.

A couple of other things we have to bear in mind contextually. The Hebrew view of death believed that when a person died during the first three days their nephesh, which is the Hebrew word for soul, hovered over their body. In fact, by the beginning of the fourth day, the body would have already fallen into such a rapid state of decomposition that it would stink to high heavens, and therefore the nephesh flees. The upshot is for the first three days you’re just dead, but from the fourth day on, you’re totally dead-dead.

Why does this matter? Because the rabbis had been teaching that when the Messiah finally arrived he would be able to achieve something so amazing they’d easily know he was the prophesied one. It’s so impossible to bring someone back from the dead. That can only happen when Messiah finally came. Only He could achieve such an act. Only the Messiah or his prophets could bring people back from the dead.

The establishment in Jerusalem had a problem with this truth. Jesus brought back to life Jairus’ daughter and the only son of the widow of Nain. If Jesus was really the Messiah, they’ve got a problem, because the rabbis had been teaching that when the Messiah arrived He would go straight to the Temple, set up His throne, and begin his reign. Now, “Temple Incorporated” existed as the biggest cash cow in antiquity, run by the Sadducees and the Sanhedrin. It became the combination of Wall Street and Walmart. It was really something to behold. Should the Messiah actually come and set up his throne in the Temple, well the gig would be over for the religious leaders. They would find themselves out of work.

We really need to understand the backdrop of this story. If Yeshua really was the Messiah, then the religious leaders in order to keep their positions, wealth, and power would have to kill him. At first they’d attempt creating some ambiguity. They’d claim that bringing a person back from the dead during the first day didn’t count, because their soul would be lingering around the body, and therefore the supposedly dead person was just in a coma. The nephesh really hadn’t fled yet. Doesn’t count!

The Jewish religious leaders used their three day hovering of the nephesh teaching to discredit Jesus’ miracles. They’d claim Jesus couldn’t possibly be the Messiah because the resurrections He’d supposedly conjured were problematic. For Jesus to truly be the Messiah, in the people’s eyes, He’d need to overcome this obstacle.

The the second and last segment of Doug Greenwold’s fascinating teaching, the actual significance of the death of Lazarus will be revealed!