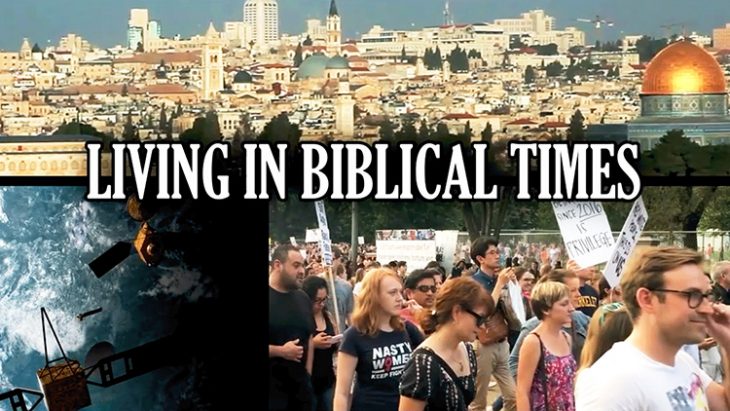 David Reagan: This week Lamb & Lion Ministries has been airing the next to the last Christ in Prophecy television program that I will be hosting before Tim Moore takes over as the ministry’s new Director. We have dedicated it to the fundamental theme that God established for this ministry 41 years ago, in April of 1980, the year when the ministry was established. The theme was, and still is, to proclaim to as many people as possible as quickly as possible that Jesus Christ is returning soon.

David Reagan: I was recently having lunch with a gentleman and we were discussing the First Coming of Jesus Christ. He suddenly leaned forward and said, “David, wouldn’t it have been exciting to live in Bible times?” My response was, “Sir, we ARE living in Bible times!” People often become mystified when I tell them that we are living in Bible times — right now. So, we are going to explain what I mean.

David Reagan: Most Christians are likely familiar with the signs that proceeded the First Coming of Jesus: He is going to be born in Bethlehem, be born of a virgin, and so forth. But, because Bible prophecy is so seldom taught in churches today, a lot of Christians are astounded to learn that signs are proceeding the Second Coming because they’ve been told there is nothing you can know about Christ’s return. They’ve been taught that event is going to be a total surprise. You shouldn’t even worry about it.

What then do we mean when we are talking about the signs proceeding the Second Coming?

Nathan Jones: There’s been a big disconnect, I think, for many of us who grew up in Sunday School because we read the Bible and believe it all happened some 2,000 years ago. Suddenly, the Bible ended, and nothing’s happened for 2,000 years since, except Church history. Sure, we were taught that one day Jesus is going to come back and we will move on into the Eternal State, but no further details.

That Amillennial type of view which many churches have adopted robs Christians of the fact that we are still living in Bible times because the Bible has prophecies that lead up to Christ’s return. For example, chapters 2 and 3 of Revelation contain Church history, covering the seven stages of the Church Age. Then the Rapture of the Church happens, which the Bible provides signs that lead up to the Rapture. Then there’s the book of Revelation with its 21 different judgments that are still yet to come, and that Tribulation time period also is proceeded by signs leading up to the Second Coming of Jesus. And then, that time period is followed by Christ setting up His Millennial Kingdom.

Tim Moore: We certainly are! Many end times signs which the Bible provides, such as the signs of nature, point to the soon coming of Christ. Jesus said they’d increase in frequency and intensity like birth pains the closer we got to Christ’s return. Whether there’s an increase in storms, earthquakes, and all of the other natural calamities that we have been seeing evidence of in recent years, the signs of nature are well documented.

We also see the signs of society. Our ministry has documented this sign extensively. People only have to turn on the news or read the newspaper to see how our formerly Christian nation is declining at an accelerating pace. The rapid decline in society’s morality is one of those signs of society.

There are spiritual signs, both positive and negative.

There are the signs of world politics, showing how the nations are coming into prophetic alignment. Just about 12-plus years ago, President Obama discounted the idea that Russia would ever be a threat in the Middle East or in the world. And yet, here again, Russia has emerged as a threat on the northern doorstep of Israel, just as predicted by the prophet Ezekiel.

We have been given the signs of technology prophesying how technology is quickly enabling the fulfillment of various Bible prophecies.

And, of course, we have the signs of Israel. Look to Israel as God’s prophetic time clock.

For believers in Christ, we shouldn’t be ignorant of these signs. As a matter of fact, the Apostle Paul when writing to the church in Thessalonica, in 1 Thessalonians 5, said that, yes, the Day of the Lord will come as a thief in the night, but it will not come as a thief for you. He said in chapter 5 verse 4, “But you, brethren, are not in darkness that the day would overtake you like a thief.” In other words, he indicated that we should be able to recognize the signs of the times and so realize when the coming of the Lord to Rapture the Church would be right upon us.

Nathan Jones: These end times signs are happening all at the same time. It’s not just a few here and a few there. No, they are happening all at the same time. Dr. Ron Rhodes coined a term a few years back for this phenomenon — convergence. Hearing that word was like a lightbulb went off over my head. The convergence of the signs becomes a sign in and of itself. When all of these signs come together, and they increase in frequency and intensity as Jesus compared to birth pains, then the moment of delivery is about to finally occur. When a woman goes into labor, the contractions get closer and closer and the pain gets stronger and stronger. Likewise, we are seeing an exponential increase in these prophetic “birth pains,” so we know the time of the Lord’s return draws near.

In the second part of this series about why we live in Bible times, we will refute some of the other prophetic frameworks that reject futurist interpretation.

Leave a Reply to Monique A Huizar Cancel Reply