Last month’s blog poll “When will the Rapture take place” results are in. Check out the graph below: 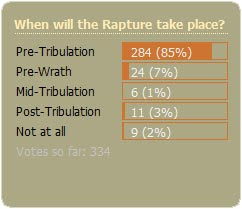 While the poll results indicate that we had a general consensus of support for the Pre-Tribulation Rapture from our perspective audience, it was encouraging for me to see that there are others with different viewpoints reading this blog.

What I wasn’t prepared for was the many venomous emails from those who support the Post-Tribulation Rapture view. The emails may not have come from some or any of the 11 that voted in support of that view, and I’m sure a lot of the emails were generated from the “Christ in Prophecy” show End Time Viewpoints that aired during one of the weeks in August (see below). Never-the-less the source that incited the emails, I’ve never encountered a group so openly hostile to the Pre-Tribulation Rapture view.

Some of the hot tempered emails carried accusations like “the Pre-Trib teachings are straight from the pits of hell,” “it’s a false teaching,” it’s “Prosperity Theology” and that “the Pre-Trib is satanically motivated.” For me personally, I “just don’t get it,” need to “wake up,” am “afraid,” and that my soul is “in jeopardy.” I literally will be responsible for “the death of the souls of untold numbers.” Wow, and I thought salvation had to do with accepting Jesus as Savior!

Why the anger and hostility over one’s eschatological viewpoint? I’ll post my theories as to why I believe some so emphatically hold to the Post-Tribulation Rapture of the Church.

One, they believe to have a Pre-Trib Rapture would give those who’ve been riding the fence a second chance at accepting Jesus as Savior. I have heard that repeatedly in a 7th Day Adventist prophecy conference and by the teachings of “Amazing Facts'” Doug Batchelor. It comes across as reminiscent of the “it’s not fair” argument kids so often accuse their parents of. And yet, Jesus told us in a story that the wage earner who arrives at the beginning of the shift gets the same payment as the one who arrived near the end of the shift. God isn’t always fair in human eyes.

Second, I’ve heard their supporters say that Christians are apostate and evil, and only by enduring a form of “Protestant Purgatory” for 7 years will the Church cleanse itself and be ready for Jesus’ return. The end result of the close killing of the entire planet and billions of people being obliterated does little to purify if almost everyone is dead.

Third, there is a certain nobleness to being a martyr for Christ; a chance some Post-Millennialists don’t want to lose. Even though we are saved by grace, for some they feel works must still be involved, and like some kind of jihadist these kamikaze Post-Tribulation Rapturists want to make the ultimate sacrifice to prove their mettle to God.

Terry James, our friend over at Rapture Ready, proposed the fourth answer in his article The Rapture Revilers: “I believe it flows from satanic rage that affects even the born again… I’m convinced it is because Satan hates Israel and the Lord’s plan to save remnants out of Israel and out of His creation called man in general… These who hurl invective are deluded, in denial. I don’t doubt their salvation. But I do doubt their faithful adherence to God’s prophetic Word. They prefer man-made eschatology, and that is given not by the Holy Spirit, but by Lucifer, the fallen one.”

I agree with Terry wholeheartedly in his saying that we do not doubt the salvation of those who hold to the Post-Tribulation Rapture view. But, the vehemence and anger in which some in that camp support their view is nothing short of satanic anger channeled to divide the Church and throw aside God’s promises to the Jewish people.

Can’t we Christians just all get along?