Origins of the Antichrist: Character

In Origins of the Antichrist: Polled we looked at visitor responses to the poll question: “Where will the Antichrist arise from?” The tally shows that there is a wide variety of views on where this apocalyptic figure will emerge from.

As we dive into the Bible to discover the origins of the Antichrist, let us get some insights into the answer by looking at his sordid character first.

The Bible is very specific about the character of the Antichrist, and the picture it paints is a disgusting one. The most detailed information can be found in the book of Daniel. Consider the chart below: 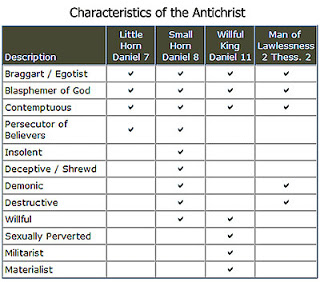 Over and over emphasis is given to the Antichrist’s mouth. He will boast non-stop about himself (Daniel 7:8). He will “speak monstrous things against the God of gods” (Daniel 11:36). He will be “given a mouth speaking arrogant words and blasphemies” (Revelation 13:5). First and foremost, he is going to be a braggart and a blasphemer.

He will be strong willed and reckless in his determination to have his way. He will show contempt for human traditions and will, of course, change even the calendar so that it will no longer be related to the birth of Jesus (Daniel 7:25).

Another point that is emphasized repeatedly is that the Antichrist will be possessed by Satan, just as Judas was (Luke 22:3). Daniel says his power will be mighty, “but not by his own power” (Daniel 8:24). Paul says his coming will be “in accord with the activity of Satan, with all power and signs and false wonders” (2 Thessalonians 2:9). John says that Satan will give his power and authority to the Antichrist (Revelation 13: 2).

Because he will be demonized, he will be a man who cannot be trusted. Psalm 52:2 says he will be a “worker of deceit.” Psalm 55:21 says his speech will be “smoother than butter” but his heart will be filled with war. Psalm 5:6 calls him “a man of bloodshed and deceit.” In Psalm 43:1 he is referred to as a “deceitful and unjust man.”

Daniel indicates that he will be a sexual pervert, most likely a homosexual. As Daniel puts it, the Antichrist will show no regard “for the desire of women” (Daniel 11:37).

The overall picture is that of an ego-maniac who abhors God and exploits people for his own purposes. He is deceptive and ruthless. He is a man devoid of integrity. This is probably the reason that when Jesus returns, John characterizes Him as the “Faithful and True” One (Revelation 19:11), in contrast to the Antichrist who has been both unfaithful and untrue.

The lack of character that will be displayed by the Antichrist is perhaps best summed up in some of the names given to him in the Scriptures:

Tomorrow we will seek the origins of the Antichrist by following his career.