A long 2,600 years ago the great Hebrew nabi Ezekiel unveiled the prophecy the Lord God had divulged to him concerning the future of the nation of Israel. Recorded in The Book of Ezekiel chapters 36 and 37, the prophet revealed that God would fulfill His promise to regather the Jewish people “from all the countries” (Ezek. 36:24) of the world where they had been dispersed and bring them back to the land promised to their forefathers Abraham, Isaac and Jacob (Gen. 17:7; 1 Chron. 16:17-18; Ps. 105:8-11; Rom. 9:4).

Like dry bones reanimated into a living person, Israel did indeed become a nation once again on May 14, 1948, after nearly 1900 years since the Romans destroyed Jerusalem in 70 A.D and scattered the Jewish people across the globe. After all these centuries, this prophecy has been fulfilled in our modern generation!

God wasn’t done unveiling the future of Israel to Ezekiel and the world, though, for the following two chapters portray a great trial for the newly established nation of Israel — the Gog-Magog Battle. Because of the unique characteristics and the great detail in which chapters 38 and 39 describe this battle, history shows the Gog-Magog Battle is a prophecy yet to be fulfilled.

The Gog-Magog Battle is set between a massive coalition of nations descended from Noah’s sons Japheth and Ham against Israel (Gen. 10:2-7). The nations are from the territories of ancient Rosh, Magog, Meshech, Tubal, Persia, Cush, Gomer and Beth-togarmah. Their leader is called “Gog, prince of Rosh, Meshech and Tubal” (Ezek. 38:2-3). The battlefield is on the “mountains of Israel, which had long been desolate” (Ezek. 38:8). The purpose of the invasion is to “plunder and loot” and destroy the people of Israel (Ezek. 38:12, 16).

The end result of an invasion by such a seemingly invincible army on a seemingly unprotected Israel will surprise the invaders and shock the world. The invading nations are in truth being manipulated by God, pulled out of their lands as with “hooks in [their] jaws” (Ezek. 38:4), so that those nations can feel the “hot anger… [of] the Sovereign LORD” (Ezek. 38:18). God drags these specific nations to the “mountains of Israel” to “execute judgment upon him [Gog] with plague and bloodshed… torrents of rain, hailstones and burning sulfur on him and on his troops and on the many nations with him” (Ezek. 38:22). God’s purpose of personally interceding using the supernatural destruction of so massive an army is not just its destruction, but “so I [God] will show my greatness and my holiness, and I will make myself known in the sight of many nations. Then they will know that I am the LORD” (Ezek. 38:23).

By His supernatural victory in the Gog-Magog Battle, God reintroduces Himself to the world and declares in no uncertain terms that He is personally defending Israel. Should the peoples of the world doubt they only have to look on Israel who “will go out and use the weapons for fuel and burn them up… for seven years they will use them for fuel” (Ezek. 39:9) and “for seven months the house of Israel will be burying them” (Ezek. 39:12) in the newly named “Valley of Hamon Gog” (Ezek. 39:11) by a newly built “town called Hamonah” (Ezek. 39:16).

Ezekiel 38:2-3 gives the prophetic name of the leader of this coalition of nations: “Gog, prince of Rosh, Meshech and Tubal.” Whether Gog is a real name like in 1 Chronicles 5:4 or is a title for a supreme position such as king or president remains to be seen. Whether Gog is the Antichrist or not depends on when one places the timing of the Gog-Magog Battle, which will be addressed later in this series.

Ezekiel 38:1-6 gives the ancient names of the territories that comprise the invading nations in the Gog-Magog Battle: Rosh, Magog, Meshech, Tubal, Persia, Cush, Gomer and Beth-togarmah. If only Ezekiel had gone the extra mile and given the names of the invading nations contemporary to the battle, a lot of debate over their modern identities would have been saved. Never-the-less, God prefers students of Bible prophecy to do their historical research, and the following list of equivalent names is the fruit of that research.

Noticeably absent from this list of Middle Eastern nations are those surrounding modern-day Israel, such as Syria, Lebanon, Jordan, Egypt, Gaza, the Arab nations and Iraq. Ezekiel 38:13 describes these nations as just observing, for many of them originate as “Sheba and Dedan [Arab nations] and the merchants of Tarshish and all her villages.” Why these nations are not also actively involved in the Gog-Magog Battle is open to speculation, but a Psalm 83 scenario where Israel has subjugated their surrounding neighbors previous to the Gog-Magog invasion so that they are finally in the peaceful situation Ezekiel describes (Ezek. 38:11) is the most likely possibility.

One glaring similarity among all the Gog-Magog invaders put in a scenario today is that all but Russia claim their national religion to be Islam. Islamic religious fervor to destroy the Jewish people would unite the fractious Muslim nations into a coalition which has never existed in this form before. The obsessive drive for economic wealth would be the draw for Russia to join in and lead this doomed coalition.

The question of when the Gog-Magog Battle will happen was put to the reader in February’s poll titled “When Will the Gog-Magog Battle Happen?” The 687 respondents cast their vote among a number of categories. The result showed a wide range of opinions as to when they thought this battle would occur in time. The results are as follows: 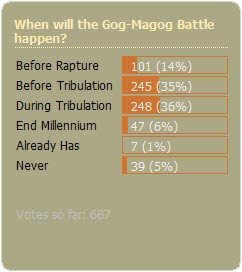 The answer “Already Has” which 7 (1%) responded in the affirmative is incorrect. That the Gog-Magog Battle was fulfilled in Ezekiel’s day by an invasion of the Scythians, Babylonians or Greeks fails to fulfill the roster of nations that compile the Gog-Magog invasion force. Also, it fails to address Ezekiel chapters 36-38 which prophesy a regathering of Jews to Israel from all over the world using the end-timing clues given as the “latter years” (Ezek 38:8) and “last days” (Ezek. 38:16). A past historical invasion just doesn’t fit the Ezekiel 38-39 description.

Also, the answer “Never” which 37 (5%) voted for can be discarded as incorrect. A literal interpretation being replaced with a metaphorical interpretation that postulates that Ezekiel 38-39’s description is somehow a symbolic struggle between good and evil is Replacement Theology spiritualizing. Prophecy fulfilled is always prophecy fulfilled literally, and the prophecy concerning the Gog-Magog Battle is no different.

The remaining answers each have their own pros and cons, and so each will be addressed more in detail in the following articles in this “Timing Gog-Magog” series. After identifying Rosh, different views will be categorized as General Timing, Before the Tribulation, During the Tribulation, and in relation to the Millennium. I’ll end with my own view in a final analysis.