The Bible describes nine separate end time wars. We have looked at the first two of these conflicts — The War of Extermination based on Psalm 83 and the First War of Gog-Magog based on Ezekiel 38-39. Both of these wars may very well happen just before or after the Rapture, but most likely sometime before the upcoming 7-year Tribulation.

3) The Conventional War of the Tribulation — Revelation 6

The book of Revelation states that a major world war will break out soon after the Tribulation begins. This war is described in Revelation 6. 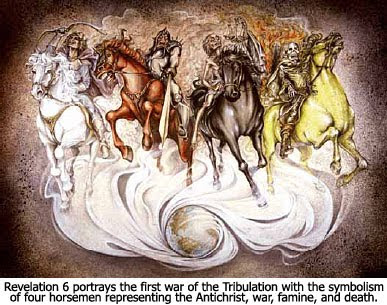 Although the Antichrist will rise to world power in Europe through cunning, deception, and intrigue (Daniel 8:23), he will have to resort to military power to conquer the world. Asia, Africa, and South America have spent too long casting off the shackles of European colonialism for them to suddenly surrender their sovereignty peacefully to a new European dictator — regardless of how brilliant and charismatic he may be.

We are told in Revelation 13:7 that the Antichrist will ultimately achieve “authority over every tribe and people and tongue and nation.” This authority will be achieved through war. Revelation 6 records the outbreak of this world war. It results in the death of one-fourth of humanity, or 1.5 billion in today’s terms (Revelation 6:8).

But the vast majority of all Muslims live outside the Middle East, the largest Muslim nations being Indonesia (201 million), India (144 million), Pakistan (140 million), and Bangladesh (115 million). These nations are the ones who are most likely to produce the strongest resistance to a Western, non-Muslim dictator, and they will be destroyed either in this war or the one that follows it.

In other words, I believe God is going to use the Antichrist as His hammer of wrath to destroy Islam.

But many other nations in the world will also have to be subdued, and that leads us to the next war of the end times.

At some point, the book of Revelation indicates that the conventional war will morph into a nuclear holocaust, resulting in the deaths of another one-third of Mankind, or another 1.5 billion people (Revelation 9:15). This means that in the first two wars of the Tribulation, more than one half of humanity will die.

A hint that the conventional war will become a nuclear one is found in Revelation 8:7 where it states that the escalation of the war will result in one-third of the earth being burned up. Another hint is found in Revelation 16:2-11 where we are told that “loathsome and malignant” sores will afflict people at the end of the Tribulation, something that would be a natural consequence of radiation from the use of nuclear weapons.

It could very well be that this nuclear holocaust could be what Jesus had in mind when He stated that in the end times men will faint from fear over the expectation of the things coming upon the world, “for the powers of the heavens will be shaken” (Luke 21:26).

This war is portrayed in the book of Revelation in chapters 8-9 as a series of “Trumpet Judgments.”

In the fourth installment of this “End Time Wars” series, we will look at the fifth and sixth wars in the end times sequence — both the War in the Heavens and the War Against the Jews and the Saints.