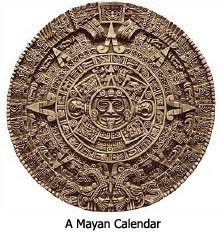 Is the Mayan Long Calendar the only source of the 2012 “end of the world” prediction, or are there other factors that support this dire forecast?

There are other factors besides the Mayan Long Calendar that are fueling the 2012 hype. One is the fact that the same date, December 21, 2012, allegedly marks the first time in thousands of years that the galactic alignment of the sun and earth with the center of the Milky Way will occur.7 Some have theorized that this cosmic event will cause the earth’s poles to reverse, resulting in major catastrophes.8

Also causing concern is the prediction by the National Center for Atmospheric Research (NCAR) that 2012 will be a peak year for the sun’s cycle, resulting in a very dramatic increase in solar flares.9 Estimates are that the next sunspot cycle will be 30% to 50% stronger than the previous one in 2000. If correct, the years ahead could produce a burst of solar activity second only to the historic Solar Max of 1958.

To no one’s surprise, the Nostradamus fans have also jumped on the 2012 band wagon. In 1994, Italian journalist Enza Massa was at the Italian National Library in Rome when she stumbled upon an unusual find. It was a manuscript dating to 1629, titled: Nostradamus Vatinicia Code. Michel de Notredame, the author’s name, was on the inside in indelible ink. This manuscript, never published by Nostradamus, was handed down to the seer’s son and later donated by him to Pope Urban VIII.10

The book is full of bizarre images and mystical quatrains. Its contents have not yet been completely revealed to the public, but there are rumors all over the Internet that it contains predictions of the end of the world in 2012.

And then there is the Bible Code. Michael Drosnin, the author of the book that popularized the code, states that the words, “earth annihilated” appear in correspondence with the year 2012.11

Finally, there is the Web Bot Project that was started in 1997. It was originally created to predict stock market trends. But it has expanded in recent years into a program that claims to be able to predict future events by tracking keywords entered on the Internet.12 When the date, December 21, 2012, is entered into Web Bot, the prediction emerges that there will be “a cataclysmic pole shift in 2012.”13

In the next installment of this 2012 series, we’ll look to see if there is any truth to the claim that the world will end in 2012.