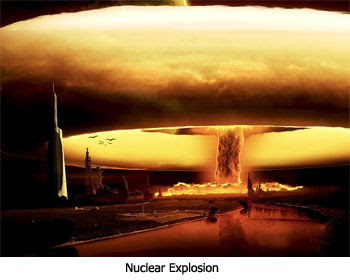 Amazingly, predictions by secular writers parallel the horrific visions the Apostle John saw in Revelation in nearly every major detail.

Contrast the words (in regular print) of secular writer Jonathan Schell author of the book The Fate of the Earth (1970), with what the Bible says (in parenthesis) as he describes the consequences of a nuclear war:

“Bearing in mind that the possible consequences of the detonations of thousands of megatons of nuclear explosives include… the extinction of many ocean species, among them some at the base of the food chain…”
(“And every living creature in the sea died” — Revelation 16:3)

“… a significant decrease in photosynthesis in plants around the world; the scalding and killing of many crops…”
(“And a third of the trees were burned up, and all green grass was burned up” — Revelation 8:7)

“… the increase in rates of cancer and mutation around the world…”
(“… and a foul and loathsome sore came upon the men who had the mark of the beast” — Revelation 16:2)

“… the attendant risk of global epidemics…”
(“And there will be great earthquakes in various places, and famines and pestilences” — Luke 21:11)

“… the possible poisoning of all vertebrates by sharply increased levels of vitamin D in their skin as a result of increased ultraviolet light.”
(“the fourth angel poured out his bowl on the sun, and power was given to him to scorch men with fire. And men were scorched with great heat” — Revelation 16:8)

“… and the outright slaughter on all targeted continents of most human beings and other living things by the initial nuclear radiation, the fireballs, the thermal pulses, the blast waves, the mass fires, and the fall-out from the explosions.”
(“By these three plagues a third of mankind was killed — by the fire and the smoke and the brimstone” — Revelation 9:18).

“Considering that these consequences will all interact with one another in unguessable ways and, furthermore, are in all likelihood an incomplete list… one must conclude that a full-scale nuclear holocaust could lead to the extinction of mankind.”
(“And unless those days were shortened, no flesh would be saved; but for the elect’s sake those days will be shortened” — Matthew 24:22).