Truth of the Virgin Birth: Annunciation 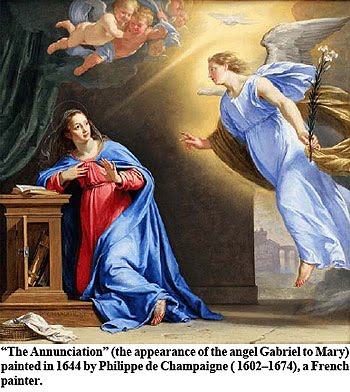 Let’s go to the Scriptures and continue with the nativity story by reading from Luke 1, beginning with verse 26 — once again using the Jewish New Testament.

26 In the sixth month, the angel Gavri’el was sent by God to a city in the Galil called Natzeret,

27 to a virgin engaged to a man named Yosef, of the house of David; the virgin’s name was Miryam.

28 Approaching her, the angel said, “Shalom, favored lady! Adonai is with you!”

29 She was deeply troubled by his words and wondered what kind of greeting this might be.

30 The angel said to her, “Don’t be afraid, Miryam, for you have found favor with God.

31 Look! You will become pregnant, you will give birth to a son, and you are to name Him Yeshua.

32 He will be great, He will be called the Son of HaElyon [meaning Son of the most High]. Adonai, God, will give Him the throne of His forefather David;

33 and He will rule the House of Ya’akov forever — there will be no end to His Kingdom.”

Let’s pause for a moment because I want to remind you of a very important fact: the person who wrote these verses was a man named Luke who happened to be a medical doctor. This is important because he gives us more information about the virgin birth than all the rest of the Gospel writers combined.

And I don’t think that was any accident. Think of it — God used a medical doctor, a man of science, to give us the detailed facts about the virgin birth! And I believe God did this on purpose so that no one could rightfully dismiss the story as the mythological imaginings of an ignorant and superstitious person. The most important witness of the virgin birth is a medical doctor!

Another thing we need to keep in mind as we consider these verses from Luke is that in that day and time, there was no such thing as shot-gun weddings — they just didn’t exist!

A formal marriage contract, called a Ketubah, was negotiated and signed at which point the couple was considered to be married, but the marriage was not consummated until after a waiting period of 9 months to a year. During that time the husband prepared a house for them to live in and the wife proved her faithfulness.

And if the woman became pregnant during that time, it was a very serious matter. It meant she would either be stoned to death for infidelity or else be humiliated by a divorce decree. So, Gabriel’s announcement that Mary was to become pregnant during that waiting period carried grave consequences, to say the least.

35 The angel answered her, “The Ruach HaKodesh [the Holy Spirit] will come over you, the power of HaElyon [the Most High God] will cover you. Therefore, the holy child born to you will be called the Son of God.

36 “You have a relative, Elisheva, who is an old woman; and everyone says she is barren. But she has conceived a son and is six months pregnant!

37 “For with God, nothing is impossible.”

38 Miryam said, “I am the servant of Adonai; may it happen to me as you have said.”

What clues do the Scriptures give us that show Mary was innocent? We’ll look at them in the next installment of this “Truth of the Virgin Birth” series.