Truth of the Virgin Birth: Mary 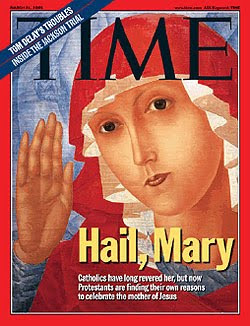 But, we are not called to exercise a blind faith. We are given substantial evidence upon which to base our faith.

Yet, the world still screams: “It is impossible!”

In response, we need to keep in mind the words that the angel Gabriel spoke to Mary. He said, “With God, nothing is impossible.”

What the world so desperately needs today is the simple, child-like faith of Mary when she said, “Behold, I am the hand maid of the Lord; let it be done to me according to the Lord’s Word.”

In that regard, I’d like to add a word about Mary. In the Protestant tradition she has been almost completely ignored, mainly due to the fact that Catholics have given her so much attention.

Now, she certainly is not to be elevated to the status of a god, as some have done, but she does deserve our attention. For one thing, most people don’t seem to be aware of the fact that she was probably only about 13 years old when she was visited by the angel Gabriel. That was the age of marriage in Israel at that time, as it still is in much of that part of the world.

So, we are talking here about a teenage girl who is a model of faith and purity and devotion to God. And one of the keys to her character is revealed in the song of rejoicing that she sang when she became pregnant with the Christ Child. That song, recorded in Luke 1, reveals that she was steeped in the Scriptures. She obviously had been born into a righteous family where she had been taught God’s Word from childhood.

Nonetheless, the Scriptures also reveal that she was a sinner in need of a Savior, just like all the rest of us. She began her song of rejoicing by declaring, “My soul exalts the Lord, and my spirit has rejoiced in God my Savior” (Luke 1:47).

And like Mary, all of us have sinned and fallen short of the glory of God. All of us need a Savior.