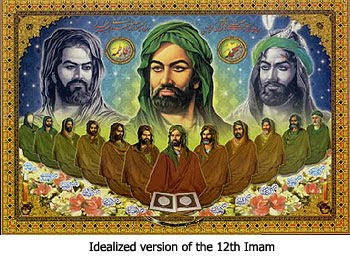 Before I review the rather bizarre theories about the end times that are contained in Joel Richardson’s and Walid Shoebat’s books, I think it would be wise to present some background material about Islam. I realize that many of you are well informed about Islam, but I have found that even those who have studied Islam rarely know anything about Islamic eschatology.

As all of you know, the holiest book of Islam is the Qu’ran, which supposedly contains statements of the Islamic god, Allah, which were given to his prophet, Mohammad, by the Angel Gabriel.

Mohammad was illiterate, so scribes wrote down what he said over a 23 year period of time, until his death in 632 AD. Much of the content of the Qu’ran was delivered to Mohammad while he was experiencing seizures that even his first wife considered to be demonic in nature. The scribes began compiling the Qu’ran shortly before Mohammad’s death. The Qu’ran is about the length of the New Testament.

The second most sacred book of Islam is called the Hadith. It is mainly a collection of Mohammad’s sayings that were not considered to be revelations directly from Allah. The Hadith also contains stories about things Mohammad did.

I think it is very important to note that the Hadith was compiled in the 9th Century, about two hundred years after the death of Mohammad. There were several compilations made during that time, but the most authoritative is considered to be the one by al-Bukhari. He collected a total of over 400,000 sayings of Mohammad and stories about him. These came from the writings of both friends and family members. Many came from Mohammad’s 15 wives. Al-Bukhari verified 7,000 as “genuine.” These became the al-Bukhari Hadith, one of several versions of the Hadith that have been produced by other compilers.6

Strangely, the Qu’ran contains very little prophecy about the end times. It mainly affirms that history will consummate with what’s called “the Hour.” This is when the resurrection and judgment will take place. So, the Hadith, containing hearsay statements by Mohammed, is the major source of Islamic eschatology.

It is extremely difficult to piece together the Islamic concept of the end times. The information is greatly disjointed, being spread throughout the Hadith. Also, unlike Christian prophecy scholars, Islamic students of prophecy have not attempted to systematize their concepts into charts and diagrams which show how all the events are related to each other.

The most helpful source I was able to discover was a book by Dr. Samuel Shahid called The Last Trumpet.7 He attempts to show that the major concepts of Islamic eschatology were borrowed from the Hebrew Scriptures, the Christian New Testament, and the concepts of Zoroastrianism. The author is the director of Islamic studies at Southwestern Baptist Theological Seminary in Ft. Worth, Texas.

Dr. Shahid proves conclusively that Mohammad secured many of his ideas orally from Christians, Jews, and followers of Zoroastrianism.8 In the process he got many of the stories and principles confused. For example, the Hadith states that the mother of Jesus was Mary, the sister of Moses!

Dr. Shahid also points out that the Hadith was compiled at a time when Islamic authorities knew much more about the Bible and Christian traditions and literature. Thus, many Hadith passages were manufactured and embellished and were heavily influenced by Christian sources.

Complicating matters is the fact that Hadith passages concerning the end times are highly contradictory, and thus it is difficult to nail down a lot of specifics. Only a general outline of end time events can be compiled.

The Islamic Signs of the Times

One very interesting aspect of Islamic eschatology is that it presents signs of the times for people to watch for. Like Christianity, Islam teaches that only God knows the exact timing of end time events. But there are signs to watch for that will indicate the season of the end times, and these signs fall into two categories: major and minor.

Most of the minor signs have to do with general trends in society. The major signs relate to specific prophesied events that will occur between the time of the appearance of the Antichrist and “the Hour” of resurrection and judgment. The listings of both the minor and major signs vary greatly.

Let me give you some examples of minor signs. As I do so, you will see how they mirror the signs prophesied in the Bible.9

There are many other minor signs that are peculiar to Islam, most of which are fantastical in nature. Here are some examples:10

The major signs pointing to “the Hour” are all critical events that are part of the end time sequence of events, beginning with the appearance of the Antichrist. Muslim scholars generally do not try to present a strict chronological order of what is going to ultimately transpire, but the order presented below is representative:

There are many other end time events mentioned in the Hadith, but these are the most important. Let’s look for a moment at each of these key events in their chronological order.

1) The Appearance of the Antichrist, called the Dajjal.
He will be a Jew born in Iran to parents who have been childless for 30 years. He will have only one eye. He will claim to be a prophet, and then he will claim to be divine. He will deceive many by his godliness and his miracles. He will go forth with an army of 70,000 Jews and 70,000 Tartars, and he will conquer all the world except Mecca and Medina. His reign will last for 40 days during a time when one day will be like a year. Some passages of the Hadith indicate that he will have the word “Infidel” written on his forehead. His reign is characterized by cruelty and deceit. He has a militaristic mentality. His purpose is to be deified, worshiped, and to reign.11

2) The rising of the Islamic Messiah, called the Mahdi.
He will be a descendant of Mohammed who will come on a white horse. He will deliver the world from the reign of the Dajjal. In the process he will conquer Israel and slaughter the Jews. He will establish a new Islamic world headquarters in Jerusalem, and he will rule for 7 years (and possibly 8 or 9 years, depending upon differing Hadith passages). His rule will end with his death.12

3) The Return of Jesus.
It is not clear at what point in the career of the Mahdi Jesus will return. Some believe it will be as soon as the Mahdi is able to organize his Muslim army to oppose the Dajjal’s Jewish army. Jesus will return to the Mount of Olives and then head to Damascus where he will meet up with the Mahdi and submit himself to him as a subordinate. At some point in the Mahdi’s wars Jesus himself will be the one who will kill the Dajjal and see to the annihilation of the Jews. Jesus will then serve as an Islamic evangelist, proclaiming Islam as the one and only true religion, and he will establish Islamic Shariah law throughout the entire earth.13

4) The Reign of Jesus.
Upon the death of the Mahdi, Jesus will assume control of the Islamic worldwide kingdom. He will reign for 40 years. He will be a just ruler. Every harmful beast will be domesticated. There will be abundant rain and plentiful harvests. All weapons of war will be converted into tools of agriculture, and there will be world wide peace. (All of this imagery is taken, of course, from the book of Isaiah.) Jesus will go to Mecca regularly to perform rituals of pilgrimage. Twenty-one years into His reign, He will marry and begat children. Nineteen years later He will die. He will be buried in Medina next to Mohammad where He will await the Day of Resurrection like all other humans who have died.14

6) The Day of Judgment.
At this point Allah descends from Heaven to judge all humanity. Allah will weigh the good and bad deeds of each person. This is called the concept of “the Scale.” The deeds of all people will be weighed in Allah’s scales to determine their eternal destiny.16

In the next installment of this evaluation of the Muslim Antichrist Theory, I’ll present Joel Richardson’s thesis as explained in his book and make some objections.