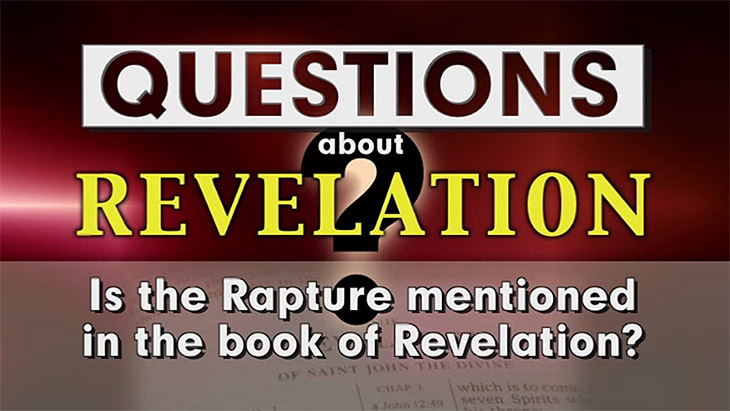 #5. Can the Rapture of the Church be found anywhere in the book of Revelation? And if so, where?

Jack Kinsella, The Omega Letter
I believe it is, yes. I believe that in Revelation 4:1 where it says, “Then I looked and I heard a voice from Heaven, as it were the sound of a trumpet, and it said, ‘Come up hither,” and instantly John says, ‘I was transported in the spirit into heaven.'”

Also, if you follow the perspective of the rest of the story or outline of the revelation from John, everything about the Church is in Heaven. Everything that has to do with what is going on earth is separate from where John is looking at it. John is looking down from Heaven. He is in the presence of the Lord. He is in the presence of the martyrs. He’s in the presence of the Tribulation saints. But, at no time is the Church itself present on earth. So, I believe the vision that’s here is between the Lord in the first three chapters to the Seven Churches, speaking essentially to the churches of this Church Age. And then after God reveals this is what is going to happen next.

Ed Hindson, World Prophetic Ministry
That’s a good question! It’s there obviously by implication. Is there a clear cut, slam dunk verse that we can say that’s absolutely the Rapture no matter what? No, but I think it is a matter of accumulative evidence. Certainly the message to the Church of Philadelphia is that you will escape the judgment that is coming in the future and that you will be taken out from the hour of trial. That certainly sounds like the Rapture. It’s a promise to a church that’s pictured as a faithful church that is doing everything right. There are no words of condemnation against that church.

John being caught up into Heaven many see as a kind of picture or type of the Rapture.

The one thing that I think a lot of people overlook is you’ve got a very clear Rapture in the book of Revelation in the story of the Two Witnesses. They’re preaching the Gospel. They are executed and put to death by the Beast who is the Antichrist. Their bodies lie dead in the street for 3 1/2 days before the Spirit of God enters into then and resurrects them. God then says to them, “Come on up,” and — Zap! — they’re raptured right out of sight. Now, why would God go to all the trouble to let them die, resurrect them, and rapture them presumably at the middle point of the Tribulation period? I think it was to convince people that the Rapture had occurred earlier and that this disappearance of millions of people that seems so unexplainable is now explained by God himself in a mini-rapture if you will of the two witnesses who are then a picture of the greater Rapture in the book of Revelation.

Terry James, Rapture Ready
Yes, I believe it is to be found in two places. First, and maybe moreso than any, but first is in Revelation 3:10 where it says that, “Because you’ve kept the word of my patience I will keep you out of the hour of testing,” which we believe to be the Tribulation hour. The Tribulation hour includes the wrath that is coming upon the whole world for rebellion and sin.

The second place I think the Rapture is found for sure is in Revelation 4:1 where it says the door is open in Heaven and John hears a voice say, “come up hither.” Then John suddenly is in the Throne Room of God and he sees all the things he sees there.

I think also there are types of raptures probably associated with the Two Witnesses as they are lifted up into Heaven.

Gary Fisher, Lion of Judah Ministries
When I first started studying the book of Revelation I found Revelation 3:10 and I memorized it in the old King James Version. “Because thou hast kept the word of my perseverance I will also keep thee from the hour of testing. That hour that is about to come upon the world to try them that dwell upon the earth.” Is the Rapture in the book of Revelation? I don’t know what else we could conclude from that verse. There is a group of people who are going to be kept from not the Tribulation, but the hour of the Tribulation, the time of it. That’s a little bit different. So, yes, I find the Rapture there.

Also, in the construction of the book, we get through the first three chapters and the churches are mentioned. Then Revelation 4:1 John says, “Come up here.” Many believe that is symbolic of the Rapture. John becomes a representative of the whole Churches showing the church is now gone to Heaven. In Revelation 4:1 it’s very, very conspicuous that the Church is not mentioned again until we get through Revelation 19. The Church is absent from Revelation chapters 4-19.

Tom McCall, Tom McCall Ministries
I believe it is. We have the promise to the Church through one of the Seven Churches that they will kept from the hour of the wrath of God. That is so important because then they have that promise that they will not go through the wrath of the Lamb which is described so fully in the later chapters.

I also think we have a type of the Rapture with John where the Lord says to John, “Come up here.” John then sees the wonders of Heaven. That’s so much like what is going to happen to the Church when we are caught up to be in Heaven with the Lord. I think that is a similarity, and of course, it is at the end of the Church section there with the three chapters of John being caught up to Heaven. It seems like that is where the Rapture is portrayed. The Rapture is not highly developed in Revelation, but it’s there.

In the next part of this series on reading and understanding Revelation, the members of our panel of Bible prophecy experts will answer the sixth question, “What about those who hear the Gospel before the Rapture and reject it, can they be saved during the Tribulation?”