Explorations in Antiquity Center: Implements of the Crucifixion

What were some of the implements used in Jesus’ crucifixion?

Dr. Reagan: Where were the spikes put in the hand?

Dr. Fleming: It’s interesting that in this particular case we only have one finding so far where we know the person died by crucifixion in Jerusalem. It shows the spike is where you would have a wristwatch. That’s not where we traditionally would think in the hand. But, what’s interesting is that the Hebrew word for hand covers from the shoulder down. So, wounds in Jesus’ hands do not need to mean an English hand from the wrist up. Probably the nail would enter where the wrist bones pull together at the ulna and radius, and there would be put the spike. 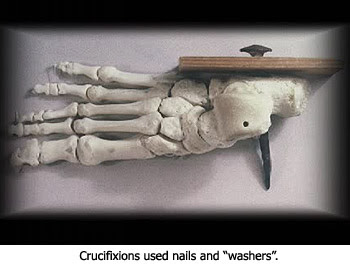 Dr. Reagan: How long did it normally take to die?

Dr. Fleming: You could last for days depending on whether you had been scourged or not.

We have two spikes here because a piece of acacia wood was found under the head of the nail in the crucified person we have talked about. In our replica you can see in this case the soldier hammered the spike into a piece of wood first like a washer so it would be less likely the body could pull out over the spike.

Another aspect, the criminal normally carried a sign through the streets with his crime posted around his neck. It’d say, “I’m a robber,” or a thief or whatever. For Jesus His sign read, “Jesus of Nazareth, King of the Jews.” It was also nailed above His head. That was probably the sign He carried for mocking.

We have three languages written on the sign. Romans signs had these little fly wings on the edge of them.

Dr. Fleming: What’s also interesting is that Matthew, Mark, and Luke say someone put a sponge with sour wine on a stick. John uses the word hyssop stick which is a reed that grows nearby. You remember in the book of Exodus the ancient Hebrews are told to dip hyssop in the blood of a paschal lamb and swab it on their doorpost and lintel. Do you see now why John is mentioning the stick? 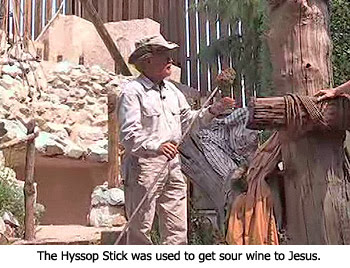 Now, the sour wine is a strong wine that has turned to vinegar. It doesn’t hasten the death, but it is considered merciful because it makes you a little bit less aware of your surroundings after they put sour wine into your system. Those who loved Jesus would have been grateful that some sour wine had been offered to Him.

Dr. Fleming: John’s gospel mentions there were four soldiers at the cross. It’s curious because Roman sources talk about four soldiers involved in crucifixions as well. 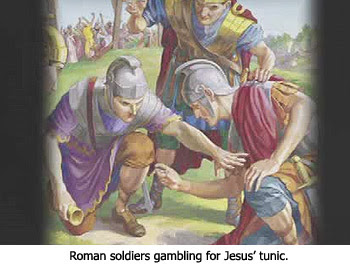 If I can speak as a Roman soldier for a minute, one of the perks of crucifixion is that you can sell the guy’s clothes on the market. Who is going to buy a quarter of a tunic if you tear it into four pieces? So, the soldiers throw the dice.

For Roman dice, believe it or not, they were made from the ankle bones of cattle. They land on four sides rather than six. Well, if there are four soldiers, you could cast lots to see who would be the lucky soldier to get the fifth item — the tunic.

Dr. Fleming: Death by crucifixion was definitely brutal. Jesus was on the cross from 9 a.m. until 3 p.m.

In Judaism, you are supposed to be buried the day you died, so that afternoon the Roman soldiers broke the leg bones to hasten the deaths. The first person on one side of Jesus, they broke his legs. The middle person — Jesus — did not need his bones broken as he was already dead. They never did break Jesus’ legs. The third prisoner, again, his legs are broken.

Jesus’ bones not being broken has a very important Passover connection. The Passover sacrificial lamb’s bones were not to be broken. Jesus became the unblemished sacrifice with unbroken legs. Not having his bones broken also fulfilled the Psalm 34:20 prophecy that His bones would not be broken.

In the sixteenth part of this series with archaeologist Dr. James Fleming at his Explorations in Antiquity Center, we’ll glean some biblical insights by looking at how Jesus would have been buried.