The Gate to Prophecy: A Life-Changing Fulfillment 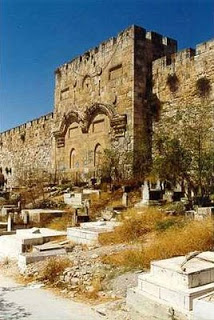 One of the things that excites me the most about Bible prophecy is that we are living in a time when we can see many of the Bible’s end time prophecies fulfilled before our very eyes. In the 20th Century, seven of the end time prophecies related to Israel were either fulfilled or were in the process of being fulfilled. They were:

All of these events represent the fulfillment in whole or in part of very specific end time prophecies that can be found in the Hebrew Scriptures.

The Gate that Changed My Life

In 1967 when the Six Day War broke out, I was a professor of International Law and Politics, and because I was following international politics I followed that Six Day War very carefully. I will never forget that when the war was over I read a very interesting news article one day. It said that when the Israeli’s decided that they were going to take this Old City, which was under the occupation of the Jordanian forces, the logical way to do so was to hit it from the west over at the Jaffa Gate, rather certainly than the Eastern Gate because it was under Jordanian control. The Israeli’s, always relying on surprise, decided they were going to hit Jerusalem from the eastern side, coming around under the cover of darkness to hit from that side.

While they were discussing that strategy and the possibility of blowing open the sealed gate with satchel charges and catching the Jordanians by surprise, the newspaper then said that when that suggestion was made an Orthodox rabbi who was there said something to the effect, “No, you will do that over my dead body, because that gate is supposed to be closed until the Messiah returns.” Well, I had no idea what that was all about. I had grown up in a church that did not teach Bible prophecy. I knew nothing about Bible prophecy. So, I got out a concordance and I looked up the word gate and I started looking at Bible verses. Guess what? I discovered Ezekiel 44 which has a prophecy that says this Eastern Gate is going to be closed, and it will not reopen until the Messiah comes.

Then I got out the Encyclopedia Britannica and I started reading about the Eastern Gate. It said that no one knows for sure why this wall was sealed and closed, but the best story is that when these walls were being rebuilt in the 1500’s by Suleiman the Magnificence that a rumor swept Jerusalem that the Messiah was coming. He called the rabbis in and asked, “What does this mean?” The rabbis replied, “When the Messiah comes, He is going to come from the east. He is going to go through the Eastern Gate, He is going to run all of you aliens out, and He is going to become the Messiah the ruler over the earth.” They dismissed the Rabbis and the order was given, “Seal up the Eastern Gate! Put a Muslim cemetery in front of it. That will take care of the Messiah, because He won’t walk in a Muslim cemetery and He can’t go through a gate that’s closed.”

That’s always been a special story for me, because that event is what got me interested in Bible prophecy. I was hooked from that point on. I could not believe that I was seeing a prophecy fulfilled right before my very eyes during the 20th century at that time. And so, I started studying Bible prophecy intently. That is why I call the Eastern Gate the “Gate to Prophecy,” at least as far as it concerns me personally.

In the second segment of our study of the Gate to Prophecy, we’ll look at why the Eastern Gate is so important to the two advents of Jesus Christ.