The Gog and Magog War: Timing and Players

What timing clues are there to the Gog & Magog War? Who are the players?

In this “The Truth Will Set You Free” TWave Radio episode, Pastor Vic Batista of Calvary Chapel Aventura located in the Miami, Florida area and I will continue our ongoing study of the Gog-Magog War found in Ezekiel 38-39.

Vic Batista: Tim LaHaye and Jerry B. Jenkins wrote a great series of books and movies called the Left Behind series. They portrayed these incredible pictures of a tremendous war that is going to be taking place. Now Tim LaHaye and also Mark Hitchcock and some other prophecy teachers when it comes to the Gog & Magog War see the timing of when this war will happen a little differently than how we see it.

Nathan Jones: It is hard to get into the timing of the Gog & Magog War without first understanding what the war is exactly. But, yes, there are different views on the timing of this war. I have an article titled Timing Gog and Magog where I give all the details about what the war is about, who the players are, and the possible scenarios for timing it. Sure, a lot of people are trying to figure out when this Gog & Magog War will happen, but there are timing clues provided in the Scriptures.

When we read Ezekiel 36-37, we know that this section fits in chronologically to Ezekiel’s portrayal of end time events. Therefore, the Gog & Magog War has to occur after Israel has become a nation again because you can’t have all these nations attacking Israel if the nation didn’t exist. Israel had not existed as a nation for 1,900 years until 1948, so the fulfillment of the vision of the Valley of Dry Bones had to come first.

Then we read after Ezekiel 38-39 to chapters 40-48. In this section Ezekiel talks about the Millennial Kingdom with Jesus ruling and reigning over this earth. Christ has defeated Satan and it’s a time of utopia on this planet. We therefore know then that the timing of this war has to occur after Israel is reborn but before Jesus returns to set up His kingdom on this earth.

There are all sorts of timing clues involved in the last days as there are a lot of other prophecies that talk about this end of the world. We have to look at Ezekiel 38-39 in relation to the seven-year Tribulation that is coming on the earth soon after the Rapture of the Church. A lot of Bible scholars are trying to figure out then if the Gog & Magog War is going to happen before the Tribulation. Will it happen at the beginning of the Tribulation? The middle? How about the end of the Tribulation? Is that possible? So, there are different timing scenarios that we can disagree on, but we know definitely the war has to happen according to Ezekiel after Israel has become a nation but before Jesus returns.

Vic Batista: Absolutely! The Bible gives us wordings such as “latter days” and “last days” to help us discern the timing of specific prophecies. People need to also pay attention to those because they give us the hints and clues we’ve been looking for.

Nathan Jones: Exactly. Whenever the Bible says “latter days,” or “last days,” or “end times” it is talking about the end of the Church Age, which is the end of the age right before Jesus comes back. Our age will end with Jesus returning to rapture, or take up, those who believe in Him as Savior up to Heaven, to spare them from His wrath which will be poured out on the earth for seven years.

At the end of those seven years, Jesus will return to this earth and we who have been raptured will follow Him. We will witness Jesus defeat the one-world leader called the Antichrist and his False Prophet and Satan. Jesus will restore the earth back to a pristine condition. Jesus will then rule and reign from Jerusalem for a thousand years.

Vic Batista: Excellent point, Nathan! That’s why I encourage everyone to actually look at those passages in Ezekiel 38-39 so they can familiarize themselves with this important prophecy. As you find the timing clues, this incredible event described here in the book of Ezekiel will become clearer.

Nathan Jones: Vic, you’re a pastor of a Calvary Chapel. I used to attend a Calvary Chapel myself for a while because I too like to go verse-by-verse through the Scriptures. Lets look at Ezekiel 38-39 that way as well.

We are not going to get our study of the Gog & Magog War all done in one day because there’s a lot of meat to this topic, but we can begin somewhere. Let’s do the set-up. Let’s take us to chapter 38 and begin with verse one. This is what the Lord began saying to Ezekiel.

“Now the word of the Lord came to me [Ezekiel], son of man, set your face against Gog of the land of Magog, the prince of Rosh, Meshech, and Tubal, and prophesy against him, and say, ‘Thus says the Lord God: Behold, I am against you, O Gog, the prince of Rosh, Meshech, and Tubal. I will turn you around, put hooks into your jaws, and lead you out, with all your army, horses, and horsemen, all splendidly clothed, a great company with bucklers and shields, all of them handling swords. Persia, Ethiopia, and Libya are with them, all of them with shield and helmet; Gomer and all its troops; the house of Togarmah from the far north and all its troops — many people are with you.”

Regardless of the identity of Gog, God is calling this Gog out to lead a group of nations to war. These nations are Rosh, Meshech, Tubal, Persia, and Ethiopia. What in the world is God talking about here? Those are of course the names of different areas in relation to Israel back in Ezekiel’s time some 2,600 years ago. Let me give you the modern translations of these names because these nations do exist today. 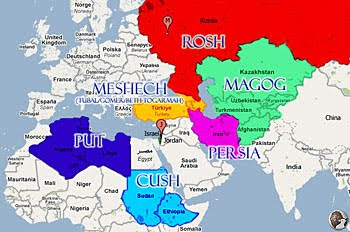 When God talks about Magog, those are the ancient lands which we get the ‘Stan countries today. That is Kazakhstan, Kyrgyzstan, Uzbekistan, Turkmenistan, Tajikistan and others. Those are all the ‘Stan countries. What was then called Magog today are those different nations.

God references Meschech, Tubal, Gomer and Beth-togarmah. Those nations today actually comprise what is moder-day Turkey. It might also cover Azerbaijan and Armenia. But, basically, those are the nations today that are combined under the banner of Turkey.

God talks about Persia, which most people probably recognize as Iran. Iran is modern-day Persia.

Ethiopia includes modern-day Ethiopia and the Sudan. Put is what is today called Libya, and possibly also covering Algeria and Tunisia.

In the third segment of our study of the Gog & Magog War of Ezekiel 38-39, Vic and I will look at Russia’s role and Israel’s prerequisite of safety in Ezekiel 38:7-9.