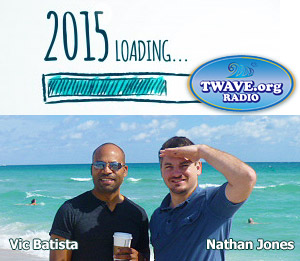 How are Christians to endure what is turning out to be a really rough year?

In this “The Truth Will Set You Free” TWave Radio episode, Pastor Vic Batista of Miami’s Calvary Chapel Aventura and I will evaluate 2015 so far and discuss what the Bible says we must do to make it right.

Vic Batista: We’ll be talking about watching and praying as we are living in these exciting times. The scripture we’ll be focusing on is Luke 21:36.

Nathan, when we kicked off the New Year, I was so excited about what God had in store for us in 2015. I know He is doing some wonderful things. We also knew that we were entering some challenging times. Florida began the year with legalizing gay marriage and the homosexual agenda has been moving forward ever since, and now the entire country has legalized same-sex marriage. So, there are a lot of things that we need to pray about. But, it all lines up with what the Bible tells us is to come in the last days, right?

Nathan Jones: You’re not kidding! Talking about the end times, we began the year with France in an uproar because of a bunch of Muslim terrorists burst into a newspaper and machine gunned down ten people because they had drawn a cartoon that depicted ISIS in a negative light. The year has been fraught with Islamic terror.

There has been fears of wars and economic disasters, as well as social and moral degradation. There has been a lot of terrible things happening in 2015. But, there have been a lot of wonderful things happening as well. After all, Bible prophecy isn’t all gloom and doom. Rather, it is about the victory of Jesus Christ and our eternal life with Him. But, in the meantime, while we wait for Jesus to return, we have to unfortunately watch the world decline and move into a final dark time, which is called the Tribulation. The Tribulation is that seven year time period when the earth will experience the worst judgments by God. It’s the darkest days in all of human history.

It well could be an extra wonderful year should Jesus be coming this 2015, but it is also going to be a very difficult year. We know that these global problems as you said are going to continue to get worse and worse.

Vic Batista: That is why one of the greatest things that I believe we can do is to watch and to pray.

Nathan, open up by reading Luke 21:36 and then give us the context there in verses 25-38 for what is going on.

Nathan Jones: Sure, for Luke 21:36 is a wonderful verse! Luke 21:36 in the New King James reads, “Watch therefore, and pray always that you may be counted worthy to escape all these things that will come to pass and to stand before the Son of Man.”

Vic Batista: That is an incredible passage! Nathan, what is going on here? Why are we called here by Jesus to watch and pray that we may be worthy to escape all these things? What things are we talking about here?

Nathan Jones: This is pretty much the last verse finishing up a teaching by Jesus. Vic, you have us starting at the very end of the story. But, the context and the beginning of the story is Jesus and his disciples walking up the Temple Mount. The disciples are looking at the Temple and they are amazed because these are poor worker-class types of folks. They have never seen anything as grand as the Temple, and so they are oohing and aahing over it.

Jesus then says to His disciples something like, “The Temple is going to fall and not one stone will be left upon another.” Shocked, the Apostles ask in Luke 21, Matthew 24 and Mark 13, “When is this going to happen? When will the Temple fall? What will be the signs of your return? What will be the signs of the end of the age?” Jesus answers by telling them about ten different signs that they will see happening the closer we get to the end times, that is the last days before Jesus’ return. The signs of the end times will grow more frequent and more intense the closer the world comes to Jesus’ return.

The signs Jesus gave concerned a proliferation of false prophets, wars and rumors of war, earthquakes, natural disasters, political and social upheaval, moral degradation, and other different signs. Even Christian persecution would come more frequently and more intensely the closer we get to His return.

As we read about the signs of the times in the Bible today, we realize that we are living in these last days before Jesus’ returns. So, in Luke 21, Jesus takes us through these signs and He also gives some other signs to be looking out for as well.

“There will be signs in the sun, the moon and the stars and upon the earth, distress of nations, in perplexity the seas and the waves roaring, men hearts failing them for fear and the expectation of those things which are coming upon the earth, for the powers of the heavens will be shaken. Then they will see the Son of Man coming in the clouds with power and great glory. But when these things begin to appear look up, lift up your head because your redemption draws near.”

Vic Batista: Wow, what a wonderful passage! I also find there some great encouragement for those of us who are alive today. As you put it, Bible prophecy isn’t all about gloom and doom. I believe that it should excite us to know that the Lord can return at any moment.

In the second part of this discussion on how to live as a Christian during this troubling 2015, we’ll explore what Jesus said we should do while we’re waiting for His return.