Judgment in Jehoshaphat (Part 1 of 8)

The Valley of Jehoshaphat is mentioned twice in the Scriptures, both times in the book of Joel, chapter 3. Let’s begin by reading those Scriptures from the New Living Translation:

1) “At the time of those events,” says the LORD, “when I restore the prosperity of Judah and Jerusalem,

2) “I will gather the armies of the world into the valley of Jehoshaphat. There I will judge them for harming my people, my special possession, for scattering my people among the nations, and for dividing up my land…

9) “Say to the nations far and wide: ‘Get ready for war! Call out your best warriors. Let all your fighting men advance for the attack.

10) ‘Hammer your plowshares into swords and your pruning hooks into spears. Train even your weaklings to be warriors.

11) ‘Come quickly, all you nations everywhere. Gather together in the valley.'” And now, O LORD, call out your warriors!

12) “Let the nations be called to arms. Let them march to the valley of Jehoshaphat. There I, the LORD, will sit to pronounce judgment on them all.

13) “Swing the sickle, for the harvest is ripe. Come, tread the grapes, for the winepress is full. The storage vats are overflowing with the wickedness of these people.”

14) Thousands upon thousands are waiting in the valley of decision. There the day of the LORD will soon arrive.

15) The sun and moon will grow dark, and the stars will no longer shine.

16) The LORD’s voice will roar from Zion and thunder from Jerusalem, and the heavens and the earth will shake. But the LORD will be a refuge for his people, a strong fortress for the people of Israel.

Location of the Valley

Let’s get into this topic by first of all identifying the Valley of Jehoshaphat.

Since the 4th Century, it has been identified with the Kidron Valley in Jerusalem, and continues to be until this day. The Kidron Valley runs north and south and separates the Temple Mount on the west side from the Mount of Olives on the east side.

But, the Kidron Valley is not a valley. It is what would be properly classified as a gorge or a ravine. 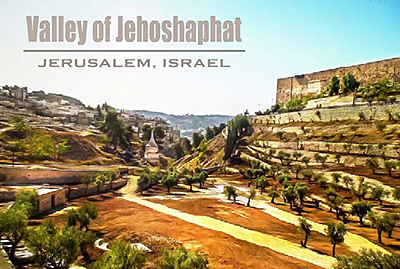 I was recently at a true valley when I went to California to preach at a church located in the magnificent Imperial Valley. That’s a true valley! It reminded me of the Valley of Jezreel in Israel, or the Valley of Armageddon, as Christians call it. 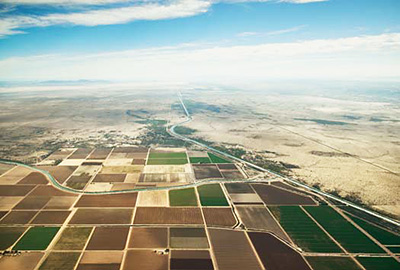 The Imperial Valley of California

In addition to the Kidron Ravine, many have tried to identify the Valley of Jehoshaphat with one of the sites where King Jehoshaphat fought one of his battles. But I don’t believe the name has anything to do with King Jehoshaphat.

The word, Jehoshaphat, means “Yahweh Judges,” and in the context in which it is used, I think it is an obvious symbolic term for the judgment of God that is going to be poured out in the end times during the Great Tribulation — a judgment that will culminate in the Valley of Armageddon, which Joel also refers to as “the valley of decision.” 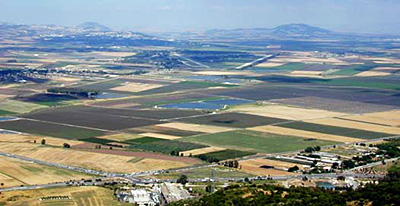 The Valley of Jezreel

So, the Valley of Jehoshaphat is a symbolic term for the end time wrath of God during the Great Tribulation that will culminate in the Valley of Armageddon.

In the second part of our study of Armageddon, we will explore if God, besides being a God of love, is also a God capable of wrath.