Judgment in Jehoshaphat (Part 6 of 8)

The Need for Violence

Some seem to think that the world will be so entranced by the Antichrist that the nations will be willing to submit voluntarily to his sovereignty. I do not believe that for a moment.

For one thing, the Muslim world is not going to bow down to a European ruler who is insisting on a one world religion and who thinks he is God. Keep in mind that although the Muslim nations of the Middle East will be devastated by the War of Gog & Magog, the vast majority of Muslims in the world live outside the Middle East in countries like Indonesia, India, Pakistan, and Bangladesh.

Nor will the nations of Asia, Africa and Latin America rush to submit to him. After all, they have spent the last 200 years fighting to free themselves from European colonialism.

So, once the Antichrist has established his power base in Europe, he will have to resort to force — overwhelming force — to conquer the world. And through his maniacal rampage to conquer all the world, God will pour out His wrath.

The entire Tribulation is going to be a time of unparalleled violence and death, which is the reason that both Jesus and one of the heavenly elders refer to the entire period as “The Great Tribulation” in the book of Revelation (Revelation 2:22 & 7:14).

Yes, the Antichrist will have to conquer the world with military power, and I believe that is what the Seal and Trumpet Judgments of Revelation are all about.

God will unleash the Antichrist as His weapon of wrath, beginning with the Seal Judgments, which I believe constitute a conventional world war that will result in one-fourth of Mankind being killed (Revelation 6:8).

And I believe the book of Revelation indicates that this war will morph into a nuclear one called the Trumpet Judgments that will result in one-third of the earth being burned up and another one-third of Mankind being killed (Revelation 8:7 and 9:15). 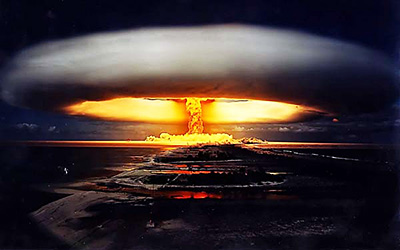 Romans 1 indicates that a day will come when God will lift his restraint on Man’s evil, and the book of Revelation indicates in chapter 8 that this will result ultimately in a nuclear holocaust. (www.kremlinrus.ru)

These are mind-blowing statistics that we need to pause to consider.

This is why Jesus said in His Olivet Discourse that the Tribulation would be so terrible that all life would cease to exist if God did not put an end to it (Matthew 24:22).

I think it is also the reason that Jesus said that “men will faint from fear over the expectation of the things which will come upon the world; for the powers of the heavens will be shaken” (Luke 21:26). That sounds to me like a reference to a nuclear exchange.

The Jews During the Tribulation

Meanwhile, while the Antichrist is conquering the world, the Jewish people will be living in peace, and I believe that will draw Jews from all over the world to return to their homeland, concentrating them for Satan’s final attack.

In the middle of the Tribulation, after the Antichrist has conquered the world, and after the Temple has been rebuilt, the Antichrist will come to Jerusalem — probably for the dedication of the Temple. He will astonish the Jewish people by entering the Temple and declaring himself to be God!

The Jews will, of course, reject this blasphemy, and the Antichrist will turn on them with a vengeance, determined to annihilate them.

In the seventh part of our study of Armageddon, we will look at the purposes for the Judgment in Jehoshaphat.