The Wuhan China Virus Vaccination and the Mark of the Beast 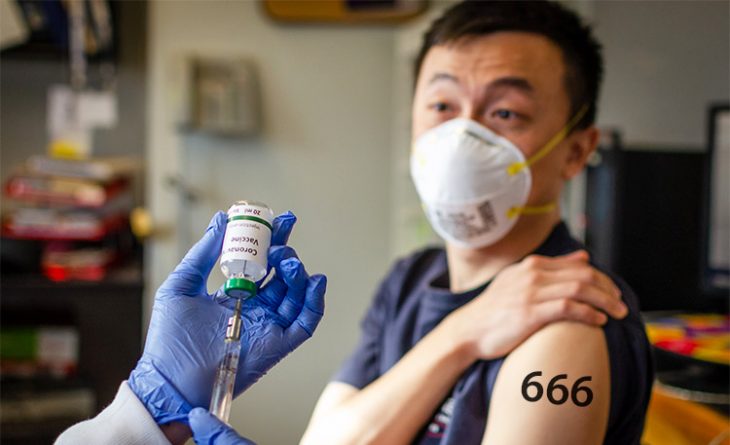 [Note: Our guest author is Don McGee, an evangelist formerly with Crown & Sickle Ministries and frequent guest on our ministry’s television program, Christ in Prophecy. This devotional comes from Don’s writing series, “Oh, One More Thing…”]

With the muddy river of drivel steadily coming from Washington, the World Health Organization, big pharma, and sundry self-proclaimed experts regarding the Chi-Com Virus, it is difficult at times to separate the truth from the lie. But, of greater interest to Christians is the precedent that is being set by the reaction to the virus by governments around the world. This issue will be briefly addressed here along with some reasons why the vaccination is not the Mark of the Beast.

On the Threshold of the Mark…

Everyone has a story to back up their opinion on the vaccination, but the elephant in the room that nobody will admit exists is the fact that this whole crisis is not so much about health as it is about developing protocols for controlling the masses.

Nothing in recent history has lent itself to the debut of Revelation 13:16 like the international response to this virus. And the consequence of that response is what demands attention from believers. That is, we are on the threshold of the scenario that is described in Revelation 13, and this emphasizes to all who have eyes to see and ears to hear that the removal of the Church is indeed imminent.

The issue that should stop us dead in our tracks is that Satan now has a tool that has been refined to an effective degree. That is, he knows a way to force a nation’s citizens to cower and to thus be manipulated into a knee-jerk reaction to almost any crisis, real or imagined. All it takes is for their leadership to exploit the crisis by using the incessant outpouring of fear (no matter how unreasonable) together with unconstitutional government mandates and threats. Most of us remember Rahm Emanuel and his infamous statement, “Never allow a good crisis to go to waste. It’s an opportunity to do things you once thought were impossible.”

This is made easier through 21st Century technology that has elevated the ability for totalitarian governments to monitor the lives of their citizens to unimaginable levels.

Students of WWII history know that the Nazi regime convinced a multitude of normal people to engage in and support the imposition of some of the most draconian and liberty-destroying practices known to humanity. And, some of the GESTAPO’s most effective tools for spying on their own people were common citizen moles along with low-tech tools like filing cabinets containing folders and 3×5 cards.

Technology has made it much easier to spy on citizens today. No filing cabinets are needed.

It is impossible to imagine the volume of information that governments and corporations, like Amazon, harvest on the habits and activities of regular people and the real-time speed at which it can be accessed, cataloged, and wholesaled to interested parties. Every modern entertainment/communication/surveillance device found along public streets and highways including those in many homes and businesses is or is potentially an information vacuum cleaner.

…But Not the Mark

Note how this unrestricted access to the details of people’s lives fits with Revelation 13:16, “And it makes everyone — small and great, rich and poor, free and slave — to receive a mark on his right hand or on his forehead, so that no one can buy or sell unless he has the mark: the beast’s name or the number of its name” (CSB). The word “it” refers to the second beast which is from the earth; students commonly refer to him as the False Prophet (FP).

Perhaps the Mark will be Satan’s attempt to deceive as many people as possible by imitating God, as seen in Revelation 3:12 and 22:4. Some scholars believe what this amounts to is compulsion under a semblance of choice. But, no matter how it might look, the program will be just one big charade designed to deceive and control.

The question continues to come up in print and in discussions, “Could the Wuhan vaccination actually be the Mark of the Beast?” No, it is not. But, it does appear possible that people’s response to the virus might become the precedent for the way they will respond when Antichrist demands worldwide acceptance of his Mark.

There are several reasons why the vax is not the Mark, and I will submit three for your consideration.

The first reason that comes to mind is that the word translated “mark” means a stamp. A good example would be the impress on a coin, or a tattoo or a logo. As generations come and go, the question as to what this Mark will look like has been debated many times. But, at the end of the day, the only thing we can know for sure is that it will be some kind of stamp that is placed on a person’s forehead or right hand.

The Chi-Com Virus vaccination is not a stamp; it is an intramuscular injection; thus, it is disqualified from being the Mark of the Beast. Trying to figure out the details about the Mark itself and its administration might be interesting to some, but that seems to be an exercise in futility (at least at this point in time) and a waste of time.

Another reason we can know the vaccination is not the Mark is that the mandates are coming from politicians, bureaucrats, conglomerate board members/CEOs, et. al. None of those people qualify as the False Prophet. The fact that any number of them have hearts that are as evil as that of the coming FP is not in doubt, but none are currently in the chair the FP will occupy in the very near future.

When Antichrist rises to the level of prominence as described in Scripture, he will select by some currently unknown method the man who will become the FP. It is possible that someone presently involved in mandates could be chosen. Though that point is mere speculation, it is the studied opinion of many students of prophecy that the Antichrist and the False Prophet are indeed alive at this present moment.

Make no mistake — Satan is not omniscient; he did not see this Chi-Com Virus pandemic coming. Equally true, though, is the fact he may exploit the world’s present response to his future advantage.

Each reader can think of other reasons why the vaccination is not the Mark of the Beast, but there is only one more that I want to mention. Before I do that, however, there is something I wish to say about this vaccination whose immediate and long-term effects are unknown and are suspect even now.

If a person believes they need the shot or that they need to wear a mask, then by all means get the shot and wear a mask. Wear it even if you are alone in a vehicle on the highway, as some actually do! However, if a person chooses to not participate in a global experiment whose effect is not known, it is their choice.

A U.S. Navy Commander was recently relieved of his duties because he chose to not take the shot. Imagine! All because of the reckless mandate by a demagogue sitting in a fancy office somewhere. This man is an American career Naval officer whose future is now destroyed because he chose to exercise the liberty he has devoted his life to protecting. Was the bloodshed by liberty-loving patriots at North Bridge after firing the “shot heard round the world” all in vain?

A foolish and politically correct mandate is a slippery slope, and once it is entered upon, it is extremely difficult to get off. There is no end to the damage that can be done to liberty. On a whim, a president or his bureaucrats can issue a mandate that changes the course of life horribly for a person, a family, or a business. Such people care not a rip for the irreparable harm and suffering they impose upon citizens. And, it is all blatantly done with elitist indifference!

There was a time when most Americans would choose to die on their feet rather than to live on their knees. That was the case in 1776.

But, the major reason we can know with the greatest of assurance that the vaccination is not the Mark is the fact that the Church is still on earth. The Mark will be imposed during the Tribulation. The Tribulation does not begin until the Church is removed from the world followed by a false peace that is brokered by the Antichrist.

As long as the Church is present on earth, there can be no Antichrist, no False Prophet, and no Mark. Difficult times are already here for many people, but what is called “difficult times” today cannot in any way be compared to what is going to happen from Revelation 6 to 19. We thank God the Bride of Christ will not be here to see it!

Christians must commit to consistent and prayerful study of the Bible in order that we may not be deceived with pseudo-Bible knowledge propounded by fearful and ignorant teachers.