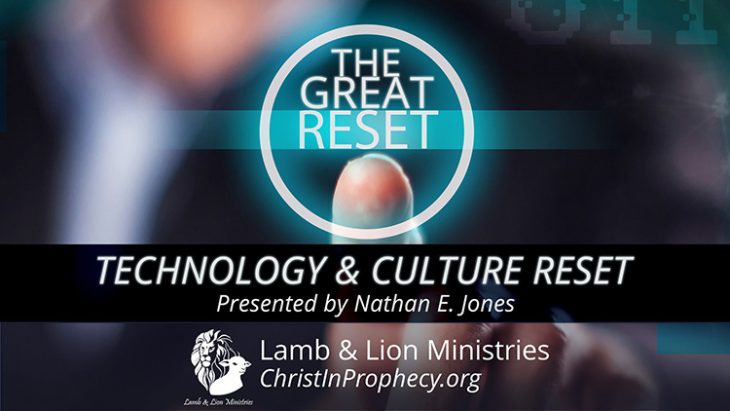 The rapid rise of the Globalist agenda that’s bent on forming Satan’s prophesied one-world government is called “The Great Reset.” In these efforts, Satan has been using today’s technologies to unite the world under his new culture and ethos. In the first segment, we began by analyzing how drastically this modern-day tech culture is negatively affecting our vulnerable youth. Then we identified steps one through three of Satan’s overarching strategy towards making this goal a soon reality. Now we will examine steps four and five of Satan’s five-step strategy in bringing about his one-world government.

Satan’s temptations had successfully achieved the breaking apart of God from Man, Man from Woman, and mankind from the animal kingdom. Satan had with almost too much ease wrested the title deed of the earth away from humanity. Satan was now the “god of this age” (2 Corinthians 4:4). The Earth was his!

But, as soon as the Enemy heard the first baby’s birth cry, he realized he had a whole new problem to contend with — mankind’s offspring. The very same pride and lusts and self-focused ambitions that fueled Satan and his demonic followers now also fueled mankind. Satan hadn’t just created one god to rule over his world, he had ended up creating hundreds, thousands, millions, and soon billions of little self-proclaimed gods. Every one of them at some level craved the attention and worship meant for God alone. It was bad enough the demonic overlord had his demons clamoring for higher positions, but how could he possibly rule the entire world and still have all of God’s creation worship him when challenged by billions of ambitious competitors? The task seemed daunting; the challenge, unbeatable.

Satan’s first solution in dealing with this quandary was to attempt to transform humanity into becoming more like his demonic kind. Genesis 6 reveals that “when men began to multiply on the face of the earth, and daughters were born to them, that the sons of God saw the daughters of men, that they were beautiful; and they took wives for themselves of all whom they chose.” As demons possessed men and conjugated with the women, the resulting offspring became giants. These “mighty men who were of old, men of renown” were known as the Nephilim. These unholy creatures provided the mythos for the demigods of ancient lore.

So abominable was this perversion of nature and so evil had the hearts of mankind been corrupted that God announced He would first cap their lifespans to 120 years, then at last stepped in and wiped the Earth clean of them with the Flood. For being the so-called ruler over the Earth, Satan could not stop God’s interference, and was relegated to being a mere bystander at the global deluge. Creation had been reset and humanity rebooted, starting with the righteous Noah and his family.

The true solution to Satan’s quandary came surprisingly from God Himself — mankind must be kept divided. Genesis 11 reveals that in only a few generations after Noah, mankind had yet again set their hearts against God’s authority and sought to establish their own rule. All of Noah’s descendants gathered as one in the land of Shinar and began to construct a tower that would stand as a monument to mankind’s disobedient refusal of God’s command to spread out into the world. Verse 4 reveals humanity’s wayward intention, “And they said, ‘Come, let us build ourselves a city, and a tower whose top is in the heavens; let us make a name for ourselves, lest we be scattered abroad over the face of the whole earth.'”

God recognized that what mankind could not do alone, they could certainly achieve if they all worked together. As God surveyed the construction site, the Trinity conversed with Himself, concluding in verse 6, “Indeed the people are one and they all have one language, and this is what they begin to do; now nothing that they propose to do will be withheld from them.” God knew that dividing humanity would slow their progress, and so He came up with quite a clever solution — confuse their languages.

After hours of futilely attempting to communicate with each other by waving their hands about and heated arguments and fistfights breaking out, those who could make sense of each other began assembling by common language. The divided people groups soon migrated off to the ends of the earth, becoming the forerunners of the ethnic peoples and nations that we have today. The combination of linguistic confusion and greedy hearts would bring about millennia of endless war and ongoing division. Mankind’s dreams of wresting back the title deed of the earth grew frustrated to approaching impossible.

Yet another division arose when a man named Abraham came on the scene that would further keep humanity divided. Back in the Garden, before Adam and Eve had been expulsed out of a paradise and into a cursed land, God had presented the serpent with a tremendous prophecy. He declared, “I will put enmity between you and the woman, and between your seed and her Seed; He shall bruise your head, and you shall bruise His heel” (Genesis 3:15). Not only would mankind be divided by language barriers and soon ethnically along racial lines, but also between those who choose to follow Satan’s rebellious path and those who surrendered their lives to faithfully follow God. The unfaithful would be separated from the faithful, God’s enemies versus God’s children, and Satan’s followers pitted against God’s disciples. Under the Old Covenant, it was the Gentile world pitted against the Jewish nation, and then under the New Covenant, the entire world against the Church.

With this first messianic prophecy, God also proclaimed a champion for His faithful, the One who would come to be known as the Messiah, the Christ, the revealed Son of God. The perfectly holy incarnation of God — Jesus Christ — broke loose Satan’s tenuous hold on the title deed to the Earth with a selfless act. Jesus crucified, buried, resurrected from the grave, victorious — He became the Worthy Lamb slain. His victory over death granted Jesus dominion over the Earth (Revelation 5). And, Christ’s faithful children, long having surrendered their claim over the world when they also surrendered their lives to Jesus, will one day be granted inheritance rights to the planet upon Jesus Christ’s return to yet again banish Satan, this time to the Bottomless Pit, and to establish His Millennial Kingdom. (But, that’s getting ahead of ourselves.)

Satan’s strategy began by distracting humanity with perceived wants, then redirecting people to focus only on themselves, resulting in a breaking apart of vital relationships, and then dividing humanity so they could not join together and so attain the power and praise which he so lustfully desires. The fifth and final phase of Satan’s strategy to achieve both world domination and mass worship ends with globalization.

Satan has spent many long centuries anxiously waiting for a means to at last be developed that would make possible the ability to regather the warring masses and then reprogram humanity under a whole new unifying culture and ethos — his ethos. This newly shared culture and (im)morality would bring about a false sense of harmony that would result in a reunification of the discordant nations, but all under his own global governmental control. Satan seeks to establish a new world order.

The Bible, especially the book of Revelation, reveals that Satan in the not too far off future will be wildly successful at implementing his new world order, though not all by his own efforts. God at first interferes in the affairs of Satan and man yet again by removing His restraining influence, and He does so by rapturing the Church up to Heaven. “Then we [Christians] who are alive and remain shall be caught up together with them in the clouds to meet the Lord in the air. And thus we shall always be with the Lord” (1 Thessalonians 4:17).

The shocking removal of all Christians from this planet will plunge the world into abject terror and a descent into spiritual darkness. With no Church to hold back this darkness, every evil inclination will be let loose from people’s hearts. Every foul deed will be done with maniacal glee. Anarchy and lawlessness will abound! Chaos will ravage the divided old world order.

The mystery of lawlessness that is already at work in this world will at last reveal himself. Out of the old world order, a new world order will arise. Out of lawlessness, the Man of Lawlessness will come forth. Satan will present his own chosen one who will ascend as if a messiah by spouting false promises of peace and safety to calm a chaotic world. The prophet Daniel in chapter 9 describes this supposed man of peace who shall come will “confirm a covenant with many” for seven years. Along with political peace, he will also offer up a new religion — a Mystery Babylon religion — to unite the world religiously (Revelation 17). The mask of peace will merely be a façade, though, for the peacemaker will quickly reveal himself a warrior, a Beast, a global tyrant (Revelation 13). As the Second Seal Judgment so tragically portrays, this Antichrist will bring war to those who refuse to bow to his rule, resulting in the staggering death of a quarter of the world’s population (Revelation 6).

In the middle of Daniel’s seven years of prophesied Tribulation, Satan through his Antichrist will have at last subjugated all the nations of the world, except Israel. The world ruler will then break his covenant with Israel by opposing and exalting himself “above all that is called God or that is worshiped, so that he sits as God in the temple of God, showing himself that he is God” (2 Thessalonians 2:4). In doing so, the Antichrist will establish his own high priest — the False Prophet — and he shall bring an end to the sacrifice and offerings made to God in the newly built Jewish Temple (Daniel 11-12; Revelation 13).

In committing this blasphemy, Satan through the Antichrist will “kill” the Mystery Babylon ecumenical world religion by setting up his very own religion in its place — Satan worship. The False Prophet will construct a “living image” of the Antichrist and require all of the world to fall before it and worship it. Those who survive the wars and God’s raining judgments will then be required to take a loyalty mark which displays the Antichrist’s name or number on their right hand or forehead. All must worship the Antichrist or by the False Prophet’s hands be cut off from commerce and so starve, be immolated in flames, or be sentenced to beheading.

After thousands of years of human history, Satan during the coming Tribulation will have at last achieved worldwide dominion and global worship. His strategy successful; His goal achieved. And, anyone who resists and refuses to comply, such as the Jewish people and the post-Rapture converts to Christ, well they face a massacre.

In the fourth segment of this series about the Great Reset, we will examine the technological means by which Satan progresses his insidious agenda, starting with the technologies that involve the harnessing of electricity and computers.