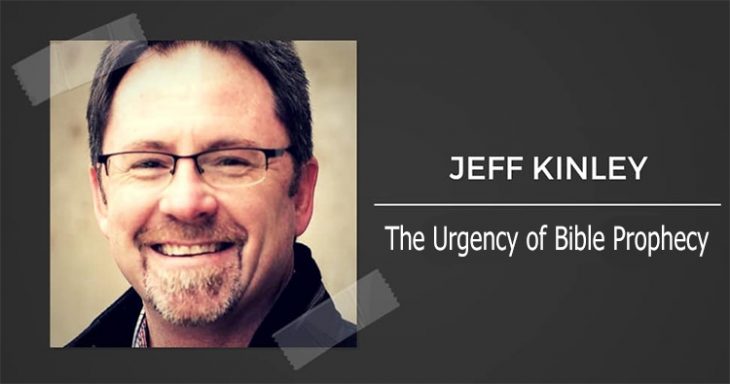 On our television program Christ in Prophecy, we aired episode five of our six episode series embarking on a very important end times topic, one that God has laid very heavy on our hearts — the urgency of the Rapture.

The signs of the end times are increasing in frequency and intensity, just as Jesus prophesied. Our Lord is indeed standing at the very precipice of Heaven, ready to return and snatch away the Church in — the Rapture. That also means the superstorm of the Tribulation will quickly follow.

To help us proclaim this important message, Jeff Kinley, noted author and preacher, brings us his special message about the urgency of Bible prophecy in our day.

Jeff Kinley: I’m going to talk about the urgency of Bible prophecy today. There are two different kinds of urgencies. There’s the panic kind of urgency where people just lose their minds as the chaos of the world hits. Then, the second kind of urgency concerns how we know that the time is short. This is the kind of urgency that a football team has when there are two minutes left in the game and they’re down by six points. It’s no time to panic, but it is time to be urgent. Therefore, we need a game plan. That’s the kind of urgency I’ll be talking about here.

Why should we have urgency? I have some reasons as to why I believe we should have a sense of urgency, not panic, but urgency about our Christian lives.

Here’s the first reason — the Bride of Christ must be awakened and prepared. In Revelation 2-3, Jesus Himself addresses the Seven Churches. Why did He give a message to these seven churches? Why did He go and evaluate these seven churches? Because closest to the heart of Jesus Christ is the condition of His Bride. He wants His Bride to be ready. He wants them to be awake. In fact, in Revelation 3:2, He says to the church at Sardis, “Wake up!” Right now the whole Church worldwide appears to be in a state of slumber. The Church is fast asleep. They’re asleep on many different levels, none the least of which are biblical.

During the Pandemic, a third of church members in America stopped going to church. A third of them have never come back! I received an email from a pastor who said, “Jeff, we used to have a nice, thriving church, but during the Pandemic, they all went away and they didn’t come back.” You see, we hid in our homes, but afterward, we didn’t go back to our churches.

George Barna did a study during the Pandemic. He found out that 18% of professing Christians read their Bibles only one time a week. 19% never read their Bibles! That’s about 20%, or one-fifth, of all the people that go to church who never open up the Word of God. Only 14% of professing Christians read their Bibles on a daily basis. It gets worse. After the Pandemic, Barna held another study and found out that 14% had dropped down to 9%. We’re becoming increasingly biblically illiterate in our day.

I believe the greatest need in the Church today is biblical discernment so we are able to look at the world and our own lives and know what we are to do about it. And yet, with less and less Bible reading going on, the Church has less and less discernment. And so, the Bride, instead of being able to see what’s going on and recognize the convergence of end times signs and respond to them biblically and accurately and spiritually, well we’re just scratching our heads just like the rest of the world.

We went home due to the Pandemic, but we didn’t connect with God. In fact, we connected less with God during the Pandemic. Biblical illiteracy leads to theological bankruptcy which leads to spiritual anemia. If you wonder why the Church today is so incredibly weak, and why we’re having such little impact on our society, it is because we are biblically deficient.

The Church today must wake up! That begins right behind the pulpit. We have to have pastors who believe in the Word of God and who preach the Word of God unashamedly and unapologetically in season and out of season, not to tickle ears, but to stimulate hearts. But, unfortunately, too many pastors today are delivering self-help sermons on Sunday mornings. They’re trying to help people just get through the week instead of doing what Ephesians 4 commands — to equip the saints for the work of the ministry out there in the world.

Pastors today are not equipping their saints. One pastor put it like this, “Most churches today are a rock concert and a fog show followed by a TED Talk.” And you wonder why people are not able to handle the world that they’re in while their marriages are crumbling and why they don’t know how to raise up their children in the nurtured admonition of the Lord. It’s because pastors are not equipping their saints. Now, thank God again for the many pastors who are doing that, but they’re not the majority.

The number one email I get over every other subject from literally all over the world is this one question: “Where can I find a Bible-teaching church?” They can go to a show on Sunday morning, but where are the men who are saying “thus saith the Lord?” They want to hear what God has to say. They could care less what the pastor thinks or how funny he thinks he is. They want to know what Jesus says about the world, life, and salvation. They want to know how in the world God’s going to bring this fallen world together so that we can be prepared when Jesus Christ comes for His Bride.

Every year a group of men called the Bulletin of Atomic Scientists gather. They’ve been meeting every year since just after World War II. They come together every year to set the Doomsday Clock. These are secular, pagan scientists, who set the clock to where they think the world is in terms of how close we all are to an extinction-level event for planet Earth.

This past year, in January, they set the Doomsday Clock at 100 seconds to midnight. In other words, and this is the closest they’ve ever put it, they say we are on the verge of an extinction-level event here on planet Earth. They list all of the reasons they think are contributing to mankind’s extinction. None of them know Bible prophecy, but they see the same pattern emerging.

The Bride of Christ has to awaken because, in order to participate in the Wedding Supper of the Lamb, she has to be awake.

In the 30-plus years of my ministry career as a pastor, I performed about 80 weddings. This is what I would tell the bride and groom after going through many weeks of counseling to prepare them for the most important relationship, humanly speaking, that will ever happen to them. I would say to the man in the last meeting, “Look, if you show up tomorrow with a suit and a pulse, I can get you through this.”

Then I’d turned to the girl and say, “I have nothing to say to you.” Here’s why. She has been dreaming about that day since she was yeah high. She’s been waiting all of her life for her “knight in shining armor” to come riding up on a horse and sweep her off her feet. She’s spent the past six months to a year meeting with florists, wedding planners, cake decorators, and all sorts of other vendors. She’s been burning up her daddy’s credit card all across town. She’s been looking at wedding dresses and spending all sorts of money. Why? Because she has been anticipating this special day.

Someone has said there are only two days on your calendar — there’s this day and then there’s THAT day. We are living for this day, but not for THAT day. I’ve never met a bride who wasn’t ready for her wedding day. The excitement and anticipation and eager exuberance that she has for THAT day is unparalleled on planet Earth.

My believing friends, we are the Bride of Christ! But, the question is, are we preparing ourselves? I’ve got laypersons whose pastors won’t let them put on a Bible prophecy conference. They’ll respond, “Well, then, I’ll just put on my own Bible prophecy conference.” We’re having hundreds come to these layperson conferences. They’ll administrate it and put it together. One of those people who have put on their own conference has even written a manual about how to put on a prophecy conference as a layperson. I told her, “Girl, you go, because we need to hear what God is saying to the Church as He’s speaking through prophecies.”

My fellow Prophecy Pro, Todd Hampson, and I have even come up with the idea of holding one day pop-up Bible prophecy conferences. We come into a city for just half a day or so, and we bring in food trucks, and we just have a blast together talking about Bible prophecy.

Look, it doesn’t matter what form it takes, it only matters that we do it. The Bride of Christ must be awakened!

In the second and final part of Jeff Kinley’s message about the urgency of Bible prophecy, he’ll explains why it is so important in this day that Christians be “Maranatha minded.”