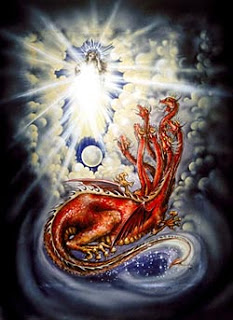 Who is the “woman clothed with the sun” in Revelation 12. Is this Mary, the mother of Jesus?

Revelation 12 is one of the most important chapters in the book of Revelation because it explains the cosmic struggle that is portrayed in the book.

The first six verses of Chapter 12 constitute a parenthetical passage. But unlike the previous ones in the book, this one is a flash-back rather than a flash-forward. It is designed to help us better understand why the Tribulation will take place.

What the chapter in effect says is that the Tribulation is the consummation of a cosmic battle between God and Satan that has been going on in the supernatural world since the revolt of Man in the Garden of Eden. It reminds us that Satan tried to stop the First Coming of the Messiah, just as he is now trying to prevent His Second Coming. The chapter is full of symbols. Let’s take a look at them.

The first symbol in chapter 12 is “a woman clothed with the sun,” with the moon under her feet, and a crown of twelve stars on her head (12:1). Many different interpretations have been given of this imagery. Some commentators claim that this woman represents the Church. Catholics claim she is Mary, the mother of Jesus.

Here is a classic example of why it is important to let the Bible interpret itself, wherever possible. The point is that this imagery comes right out of Joseph’s dream in Genesis 37, where the sun stood for Jacob, the moon for Rachel, and the stars for Joseph’s brothers (Genesis 37:9-11). So, we can conclude that this woman represents the nation of Israel, the descendants of Jacob.

The woman is pregnant and is about to give birth. This refers to Israel providing the Messiah to the world. In verse 3 “a great red dragon,” which is Satan, tries to devour “a male child” when He is born — which, of course, is exactly what Satan tried to do when he motivated King Herod to send his army to Bethlehem to kill all the babies at the time of Jesus’ birth. But the male child, Jesus, is “caught up to God and to His throne” (the Ascension) where He waits “to rule all the nations with a rod of iron” (12:5).

These verses remind us that there is a great cosmic struggle going on over the dominion of planet earth. God originally gave that dominion to Man (Genesis 1:28), but it was stolen by Satan when Adam and Eve gave in to his temptation and rebelled against God. Consequently, Satan is now “the ruler of this world” (John 12:31) and “the whole world lies in the power of the evil on” (1 John 5:19).

But one of the reasons Jesus died on the Cross was to make it possible for Man to reassert his rightful dominion over the earth. This is one of the many delayed benefits of the Cross (our glorified bodies being another one). Jesus will reclaim dominion over the earth when He returns at the end of the Tribulation. We saw Him doing that in the flash-forward about the “strong angel” in chapter 10. In chapter 5 verse 13 we are told that the heavenly hosts sing about that glorious day: “To Him who sits on the throne, and to the Lamb, be blessing and honor and glory and dominion forever and ever.”