The United Nations in the Arms of Iran 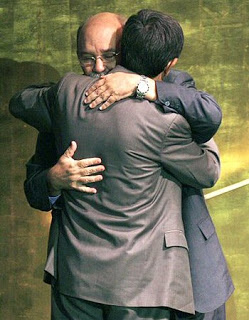 If pictures are worth a thousand words, what does the following picture by Reuters say?

The man in the front of the picture with his back to the viewer is Iranian President Ahmadinejad. This is the same man who gets his orders from the Islamic Ayatollahs, who wishes to usher in the Islamic Mahdi (Messiah), is hell-bent on building nuclear weapons, who resists the world over developing its nuclear technologies, and who almost daily rants that the nation of Israel is a “filthy germ” that needs to be “wiped off the map.”

The man in the back is the United Nations General Assembly President, Father Miguel d’Escoto Brockmann of Nicaragua, the Maryknoll priest who defied the Vatican to serve the Sandinista revolution in Nicaragua in the 1970s (read more on Father d’Escoto). During the UN’s International Day of Solidarity with the Palestinian People held November 29, 2008, which is the UN’s celebratory anniversary of the 1947 date it adopted Resolution 181, calling for the further partitioning of the land to grant more Jewish promised land to the Arabs, Father D’Escoto called for an international boycott of Israel after accusing it of being an apartheid regime. D’Escoto went on to decry the plight of the Palestinians, describing the failure to create a Palestinian state as “the single greatest failure in the history of the United Nations.”

The men are embraced in a formal hug of greeting at the United Nations.

So, on one side is the Iranian leader who denies the holocaust of the Jews during World War II, yet wants to create the holocaust of the Jews by starting World War III. On the other side, the UN General Assembly leader who, though a priest, says his highest influence isn’t Jesus but Tolstoy, who was the international face of the first Sandinista government against the United States, who took the United States to the International Court of Justice — the World Court — charging Washington with aggression by land and with a sea blockade and won, and who now has called the world to sever its financial ties with Israel and impose sanctions against Jerusalem.

How well does this hug bode for Israel, that the United Nations is in the arms of Iran?

“This is the word of the LORD concerning Israel. The LORD, who stretches out the heavens, who lays the foundation of the earth, and who forms the spirit of man within him, declares: ‘I am going to make Jerusalem a cup that sends all the surrounding peoples reeling. Judah will be besieged as well as Jerusalem. On that day, when all the nations of the earth are gathered against her, I will make Jerusalem an immovable rock for all the nations. All who try to move it will injure themselves.”

“On that day I will strike every horse with panic and its rider with madness,’ declares the LORD. ‘I will keep a watchful eye over the house of Judah, but I will blind all the horses of the nations. Then the leaders of Judah will say in their hearts, ”The people of Jerusalem are strong, because the LORD Almighty is their God.” ‘On that day I will make the leaders of Judah like a firepot in a woodpile, like a flaming torch among sheaves. They will consume right and left all the surrounding peoples, but Jerusalem will remain intact in her place.”

“‘The LORD will save the dwellings of Judah first, so that the honor of the house of David and of Jerusalem’s inhabitants may not be greater than that of Judah. On that day the LORD will shield those who live in Jerusalem, so that the feeblest among them will be like David, and the house of David will be like God, like the Angel of the LORD going before them. On that day I will set out to destroy all the nations that attack Jerusalem.'” – Zechariah 12:1-9