How COVID-19 Has Become a Constitutional Crisis 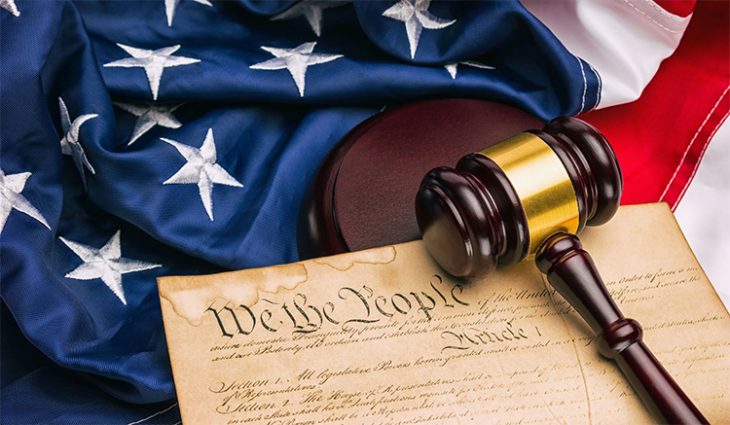 (Editor’s note: This article’s author, Dr. Patrick Oliver, is a part-time volunteer evangelist for Lamb & Lion Ministries. In his full-time capacity, he serves as a professor at Cedarville University in Ohio where he is Director of the Criminal Justice Program. Cedarville is a Baptist institution of higher learning. Prior to coming to Cedarville in 2005, he served for 27 years in law enforcement, including the position of Chief of Police in three Ohio cities, including Cleveland. Dr. Oliver is available to speak at churches and conferences on any aspect of Bible prophecy.)

Freedom is a fragile thing and is never more than one generation away from extinction. It is not ours by inheritance; it must be fought for and defended constantly by each generation, for it comes only once to a people. Those who have known freedom and then lost it have never known it again. – Ronald Reagan

The battle for freedom comes in many forms. Our current battle consists of a horrible health crisis, not just in America, but worldwide. It has resulted in us being told by federal and state political executives, some national and state medical experts, along with the mass media, that the coronavirus threat is so huge that the state governments must be allowed to mandate that we shut down much of life as we know it.

Therefore, some of our current mandates consist of no more school, no more dining in restaurants, no more going to movie theaters, no more church services, no non-emergency medical care, no group gatherings of any significant size, and only “essential” workers operating at their places of business.

The two crucial questions that emerge are whether these draconian restrictions on our freedoms are really necessary for our safety, and are they consistent with both state and federal constitutions?

Before I address these questions, I think it would be helpful to provide an historical perspective to give some context.

The Declaration of Independence

The Declaration was signed by 56 men, 29 of whom had seminary degrees. Many of them had graduated from Harvard, Princeton or Yale — all of which were founded as Christ-centered institutions of higher education.

In the Declaration, the colonists indicated their resolve to dissolve their political bands with Great Britain. They stated that their decision was based upon the “Laws of Nature and Nature’s God.” The Laws of Nature are laws that are intuitively and instinctively known to people through their God-created conscience. The Laws of Nature’s God are the moral laws contained in the Ten Commandments.

There are five principles that are affirmed in the Declaration of Independence:

The Declaration of Independence, like the Bible (Romans 13:1-7 and 1 Peter 2:13-17), indicates that the purpose of government is to protect the life, liberty, and property of all individuals by punishing evildoers and encouraging the righteous. When government officials fail to do this, they themselves are resisting the ordinances of God and are illegitimate authorities. It is then the right of the people to challenge this destructive form of government by altering it or replacing it.

The Response to the COVID-19 by State Governments

In states across our nation, governors and mayors — or their health directors — have issued “stay-at-home” orders and “cease business” orders that represent a degree of authority that has not been given to them by anyone.

Just as at the federal level, each state government in our nation has a constitution that mandates a separation of power among the three branches of government (legislative, executive, and judicial). And in each case, the power to create law is vested in the legislative branch alone. This separation of powers exists precisely to prevent the temptation of tyranny due to excessive power being located in one branch of government.

The creation of executive orders that become mandated directives is contrary to the separation of powers. Keep in mind that such mandates are not laws since they have not gone through the legislative process. A governor cannot create laws. He can only enforce laws passed by his state’s legislative body.

Yet, governors, mayors, and bureaucrats are mandating many forms of quarantine as “law.” All these mandates are designed to “lockdown” both healthy and unhealthy community members. Normally, quarantine directives are aimed only at the unhealthy population.

In many cases, these executive orders have resulted in stopping people from working, attending church, going to school, and visiting their loved ones in nursing homes. Do they have the “constitutional authority” to issue such mandates? The answer is simply, no.

These state and local officials can suggest guidelines, but they cannot mandate the loss of your God-given freedoms. Under the United States Constitution and the Bill of Rights, your unalienable rights to freedom do not cease to exist during a health or any other kind of crisis. The First Amendment of the United States Constitution declares some of these God-given rights for every person. Read it carefully:

Congress shall make no law respecting an establishment of religion or prohibiting the free exercise thereof; or abridging the freedom of speech, or the press; or the right of the people peaceably to assemble, and to petition the government for a redress of grievances.

The Fifth amendment addresses the unlawful taking of property, which is what happens when you forbid someone to operate their private business. All these actions are not only unconstitutional, but they are also manifestations of totalitarianism or tyranny, which is defined as, “An arbitrary or despotic exercise of power; the exercise of power over others with a rigor not authorized by law” (Webster’s Dictionary).

This perspective of our constitutional freedoms is articulated by a quote from Michael Peroutka, attorney, and co-founder of the Institute on the Constitution (https://theamericanview.com):

In point of fact, no governor, in any state, has the authority to suspend the Constitution. And no pretended “Emergency Powers” legislation can give it to him because the legislature cannot give the Governor an authority that they themselves do not have. And any attempt for a Governor to suspend Constitutional rights is an act of lawlessness and a violation of his/her oath of office.

What Should We Do?

Stand up and speak out in defense of our constitutional rights! We must not let fear motivate us into being willing to dutifully follow any order given to us, regardless of its constitutionality. Specifically:

I want to live free; I imagine you do as well. To do so, we must all get acquainted with our Constitution so we can stand on the rule of law, not our opinions, fears, or feelings. In our constitutional republic, all laws should be based on God’s higher fixed law, and not majorities.

Common sense and, for Christians, biblical wisdom and responsibility, should be our guidelines in responding to this pandemic — and not the surrender of our rights.

Those who would give up essential liberty, to purchase a little temporary safety, deserve neither liberty nor safety. – Benjamin Franklin

Patrick Oliver: Common sense and, for Christians, biblical wisdom and responsibility, should be our guidelines in responding to this #pandemic — and not the surrender of our rights. Click To Tweet