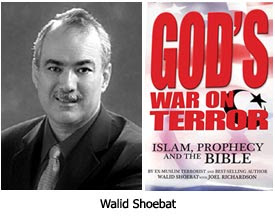 As this essay was being completed a new book was published on the subject that is co-authored by Joel Richardson and Walid Shoebat. It is titled God’s War on Terror: Islam, Prophecy and the Bible.1

This is a very expensive book ($29.95) and a very long one (512 pages). The writing is very tedious and difficult to follow. Even worse, the organizational format is chaotic and confusing. It is very clear that it was not written by Joel Richardson, who is an excellent writer. I can only conclude that Richardson must have helped with the research and Shoebat was the writer.

The book rehashes Richardson’s arguments, but in much greater detail. One of the maddening things about the book is that it resorts throughout to convoluted reasoning and scripture misapplication.

An example of the latter can be found in Shoebat’s explanation of Psalm 83 — a topic ignored in Richardson’s book “Antichrist: Islam’s Awaited Messiah.”2 He attempts to prove that the war described in this psalm between Israel and its close Arab neighbors is one that will occur at the end of the Tribulation, after the Second Coming of the Messiah. Thus, he argues it will be a conflict between forces led by Jesus and those led by the Antichrist. I was astonished to read this interpretation because I have studied this psalm in detail, and there is not one verse in it that even implies that Jesus will be present on this earth when the battle occurs.

So, I looked for Shoebat’s scriptural proof of Jesus’ presence. Believe it or not, the proof he provided was quotes from two other psalms:3

Neither one of the psalms are related to Psalm 83. Both are prayers by Asaph for the Lord to return to the earth to bring justice. Neither one states that the Messiah is on the earth.

This kind of incredibly sloppy proof-texting can be found throughout Shoebat’s book. Whenever he wants to make a point, he goes fishing for a verse. When he finds it, he reels it in and applies it to the passage under consideration, whether it is related to that passage or not.

Another example can be found in the second argument he gives for placing the Psalm 83 war at the end of the Tribulation. He says it must occur at that time because it is a war triggered by the Antichrist’s desecration of the Jewish Temple — a temple that will be rebuilt during the first half of the Tribulation. And what is his evidence? He quotes Psalm 79:1 — “O God, the nations have invaded Your inheritance; they have defiled Your holy temple.” Once again, he tries to prove a point about Psalm 83 by quoting a verse from an unrelated psalm.

A good example of Shoebat’s tortuous logic can be found in his attempt to explain away the meaning of Daniel 9:26. The plain sense meaning of this passage is that the Antichrist will come from the people who will destroy the Temple.

Shoebat and Richardson argue that the Roman legions that carried out the destruction of Jerusalem and the Temple in 70 AD were composed primarily of Arabs, mainly Syrians and Turks.4 They therefore conclude that the Antichrist will arise from the Syrians or Turks and will be a Muslim.

Shoebat and Richardson have gotten one thing right: the Muslim world is going to suffer a devastating fate in the end times, but not at the end of the Tribulation as a result of a conflict between armies commanded by a Muslim Antichrist and Jesus.

The Middle Eastern Muslim nations will suffer overwhelming defeats in the Psalm 83 War and the Ezekiel 38 War before the Tribulation begins and before the Antichrist comes on the scene. The Antichrist, who will arise out of the revived Roman Empire will then launch a world war to conquer all nations, and during that war, he will be used of God to annihilate the remaining Muslim nations outside the Middle East.

In conclusion, I want to emphasize once more that the behavior of the Antichrist described in 2 Thessalonians 2:3-4 rules out his being a Muslim. This has to be one of the key stumbling blocks for the whole theory.

I would also like to answer a question that Shoebat poses throughout his book and seems always to mention in his public presentations. He asks, “Besides the argument over whether Magog is Russia, can you cite any literal reference to a nation that God destroys in the End-Times that is not Muslim?” Yes, I can. It is Babylon, whose destruction is described in detail in Revelation 18. I say that because I am convinced that the “mystery” Babylon that is mentioned in Revelation 17:5 is the end time worldwide empire of the Antichrist that will be headquartered in Rome. I have written extensively on this point, and you can find an essay about it.

Second, I think the current rush to identify the Antichrist as a Muslim is a classic example of newspaper exegesis — of reading the news headlines into the Bible rather than letting the Bible speak for itself. It would be good to keep in mind a comment made by the great Bible teacher Ray Stedman: “What determines the future is what God has done in the past and what He has promised to do in the future. So don’t look horizontally at current events.”5