I am very passionate about going to Israel and leading others on tours of the Holy Land. Gary Fisher, founder and director of Lion of Judah Ministries out of Franklin, Tennessee, asked me a series of questions to understand the reasons behind my passion.

Q1) What is the number one reason you believe we’re living in the season of the Lord’s return?

There’s so many that I could give, but the number one reason has to be the re-establishment of the nation of Israel.

The Bible says over and over and over that in the end times the Jewish people are going to be regathered from the four corners of the earth and their nation will be reestablished. They’ll be put back in the city of Jerusalem and the whole world will come against them over one issue — the control of Jerusalem. And that’s where we are.

And, I’ll tell you what I saw when that began to happen in 1948. Of course, I was only a youngster at that time and in fact I was 10 years old at that time, so it was of no significance to me, but when it became significant to me was in 1967. I began to really study Bible prophecy and begin to see prophecy after prophecy being fulfilled before my very eyes that had been there 2,000 years.

End time Bible prophecy focuses on the nation of Israel. It is God’s prophetic time-clock. God says when these things start happening Jesus is going to be at the very gates of Heaven.

Q2) In Israel’s Independence Hall in Tel Aviv there is a newspaper clip of 1948 that says “The State of Israel is Born.” Is there any Bible prophecies that come to your mind?

Yes, first of all, let me just say that’s one of the most moving places that I take people to in Israel. There are a number of places but that one, and most groups never go there as they completely bypass Tel Aviv, but to go to that place where Bible prophecy was literally fulfilled, where David Ben-Gurion stood up and he spoke those words reestablishing the nation of Israel…

Q3) Now, you have led many tours to Israel, and there are lots of prophetic implications about traveling all over the Land of Israel. Would you like to comment on some of those?

So, we show a lot of prophetic places. One place, for example, and I love to take people to it (I don’t get to every trip) is up to Caesarea Philippi which is the northern most point of Israel. It’s only two or three miles from the Lebanese border and about five miles from Syria. It’s where a great Roman city existed at the time of Christ called Caesarea Philippi. Jesus never went to Roman cities, but for some reason He took His disciples up there one day and in that city He said to them, “Who do men say that I am?” And they said, “Well, some say John the Baptist, some say Elijah.” And He said, “But who do you say that I am?” And Peter said, “I say you are the Christ, the Son of the Living God.” And then He said to him, “God has revealed that to you,” and He said, “Upon that confession I’m going to build my Church and the gates of Hades will not prevail against it.” And right there is a cave right where He said that. And that cave, by Roman legend, was the gate to Hades. And the Bible comes alive when you see those things!

You come back and when you read “Capernaum” on a page and it’s no longer a name on a page. It’s a place where you walked, you saw it, you smelled it, you feel it, you experience it. And, I love to see the Bible come alive for people as we take them over there.

Q4) There are lots of prophecies that ought to be clicking in our brains, but do you want to comment on the Mount of Olives?

When I look out there I always see something that had a tremendous impact on my life and that’s the Eastern Gate. In 1967 during the Six-Day War, I was following it very closely. I was a professor of international politicsat that time and one day I read in the paper where the Israelis had broken into the Old City through the Lion’s Gate and had won the city. They had recaptured it for the first time in 1,897 years. 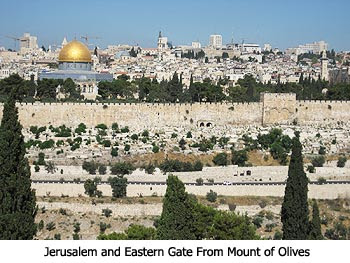 And in that article, I read that they had originally proposed to blow open the Eastern Gate because they felt like that would catch the Jordanians by surprise, but an orthodox Jew had said, “You will do that over my dead body. Because that gate is not to be opened until the Messiah returns.” I didn’t know what he was talking about. I had never been taught Bible Prophecy. So, in 1967, I go to a concordance and I look up the word “gate,” and to my astonishment I go to Ezekiel 44 and there is a statement where Ezekiel is taken on a tour and he basically says, “This gate, the Eastern Gate, will be closed and it will not be opened until the Messiah returns.”

Then, I go to history and discover that when the walls were rebuilt in the 1500s, that gate of all the eight gates of Jerusalem was closed. It was bricked up and nobody knows for sure why. But, the rumor and legend is that as they were rebuilding it as a rumor swept the city that the Messiah was coming. Suleiman the Magnificent called in the Rabbis and said, “Who is this? Who is this Messiah?” And they said, “He’s going to come and run you out of town and He’s coming through the Eastern Gate.” So, he ordered them to brick up that gate and put a Muslim cemetery in front of it. He said, “No Jewish holy man will step in a Muslim cemetery and he can’t walk through a gate.” And I thought, “This is incredible!”

So, every time I go to Israel and I get on the Mount of Olives and I look at that Eastern Gate, I think there is Bible prophecy fulfilled before my very eyes. The Bible said that gate would be closed and it was closed. The Bible says it will not be open until Jesus returns. Many times people have tried to open it and every time they’ve been stopped.

Q5) Would it impact people’s lives to go to Israel? 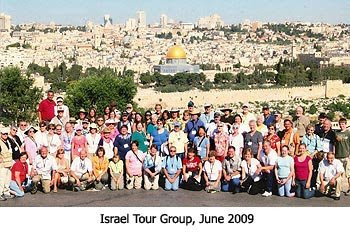 I have no doubt about it. It will impact your life and as I say, it brings the Bible alive. There was a pilgrim who went to Israel in the fourth century, about 1350 A.D. He wrote in his journal, “I have toured the Holy Land, and I can say beyond a shadow of a doubt that a tour of the Holy Land is like reading a fifth gospel, because it brings it all alive in your heart.”