Jesus warned in Matthew 24:24 that “false Christs and false prophets will appear and perform great signs and miracles to deceive even the elect — if that were possible.” This verse tells us then that a requirement for being a false Christ is the ability to do signs and wonders. Once people see these miraculous events they will conclude, “Hey! If he can do a miracle, certainly he must be the Messiah. Or, he must be God.”

Many false prophets today have claimed they have the ability to do miraculous signs and wonders. Examples can be found in certain faith healing movements. Such false leaders like Benny Hinn and Todd Bentley come to mind. But, they haven’t yet claimed to be Christ. So, can we say then that Matthew 24:24 is being fulfilled today?

Bible prophecy expert Don Perkins, the founder and director of According to Prophecy Ministries in San Diego, California, was asked if he believes there are false Christs who actually perform “signs and wonders” in fulfillment of Bible prophecy today. The following is how Don responded.

We may have to wait awhile before the more convincing false miracle workers come on the scene during the Tribulation. But, I think it’s interesting that this latest one out of Puerto Rico — Jose Luis de Jesus Miranda — says that he is certainly not a false Christ because he points to Matthew 24:24 that says the false Christs will perform miracles, and he doesn’t perform miracles. He teaches that. He’s one of the most dangerous ones I think today because he actually uses Scripture to prove that he is not the false Christ. But we know, based on the Word of God, he falls right into that category. The devil is very, very clever and very, very crafty.

I watched a program on Dateline that did the special on Jose Luis de Jesus Miranda. What amazed me was that the people in the audience were worshipping him and they praised him, even singing songs that we normally sing in our churches. They’re basically singing these songs to this individual. He’s wearing all types of fine watches and he’s got homes everywhere. 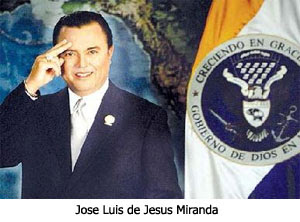 But, most cults like that, they always deal with sin. Sin as they teach is never what we know from the Bible. So again, it puts him in that category of being a false Christ because he still has the ability to deceive people into believing he is somehow supernatural.