Thoughts About The West Bank

Every time I think of the West Bank, I am reminded of a conversation I had one time on an international flight with an American fellow sitting next to me. He asked me why I was wearing a cap with the word “Israel” on it. I explained that I take groups to Israel and that I strongly support the sovereignty of the state of Israel.

He responded by saying that he had a real problem with the Israelis. When I asked him what it was, he said, “I just don’t understand why they are so stubborn about holding on to the West Bank. Why don’t they just give it up so that they can have peace?”

I sensed that the man had absolutely no idea what he was talking about, so I responded to his question with a question: “Tell me, where is the West Bank?”

Yes, I know, but do you?””Of course!” he responded, a little irritated.

He thought for a moment and then he said. “It’s the west bank of the Nile River.”

The west bank of the Nile River happens to be in Egypt. But I was not surprised at his geographical ignorance. It is endemic among Americans. I learned many years ago when I taught college that the average American college student could not identify Africa or Asia on a blank world map.

So, here was a man pontificating about what Israel should do with its heartland, not even knowing where it was located. And this attitude is characteristic of most of the world. 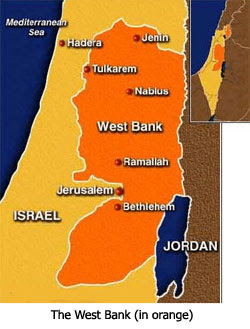 The fact of the matter is that Israel is one of the world’s smallest nations. It is about the size of the state of New Jersey. It is 75 miles wide and 300 miles long (yes, you read that correctly!). If the West Bank (the ancient biblical areas of Judea and Samaria) were to be given to the Arabs, Israel would be only 9 miles wide at its narrowest point. It would not have any defensible borders. Yet, the nations of the world are demanding that Israel surrender its heartland when not a single one of them would consider doing the same thing if they were in the same situation as Israel. It is hypocrisy gone to seed. 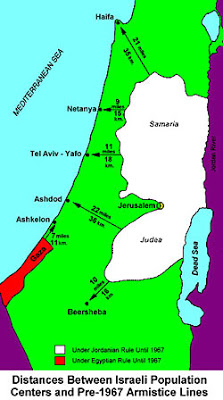 Some demand that Israel must surrender the West Bank because they acquired it through a war. If all the nations making such a demand (including our own) would follow their own advice, the world map would be altered drastically overnight. For example, we would have to surrender all the territory we won in the Mexican War of 1846-1848 (California, Nevada, Arizona, Utah, and parts of Colorado and New Mexico). And, tragically, we would have to surrender Texas which was wrested from Mexico in the Texas War of Independence in 1835-1836!

The Six Day War of 1967 was a defensive war, and under international law, Israel has a right to keep every square inch of the land it won in that war. Furthermore, the land it won was given to it long ago in perpetuity by Almighty God.