One of the signs that we are in the last days before Jesus returns is a proliferation of false teachers promoting false doctrines (Matt. 24:24; Mk. 13:22). One of these deceptions the elect have naively embraced is the eastern occultic practice of Yoga. Church calendars are filled with yoga classes teaching what is considered a harmless “Christianized” version of yoga stretches. If they only knew how occultic — how demonic — the purposes of yoga truly are. Even the “harmless” exercise portion are in reality various ritual genuflects to Hindu idols.

Jeremy (J.R.) Hall, formerly the Executive Director of Berean Watchmen Ministries located way up there in Saskatoon, Saskatchewan in Canada, has written an excellent article titled “A Stretch into the Occult: A Christian’s Response to Yoga” that delves deep into the occultic practices and demonic purposes of yoga. Jeremy has kindly allowed me to repurpose his article in the hopes that we can warn Christians away from this satanic deception.

Due to the length of the article, it has been divided it into three parts: the last part was on the satanic deception behind yoga, this second part is on how yoga and Hinduism are one and the same, and the final installment lists the reasons why yoga is definitely not for Christians.

Yoga and Hinduism Are One and the Same

Hinduism encompasses a wide variety of religious beliefs, and has been influential in the foundations of other religions, such as Buddhism and the New Age Movement and spin-off religions.

Hindus are very tolerant of other religions, because they believe that all paths eventually lead to God — because ALL is God.

The Law of Karma

The Law of Karma is a guiding principal of Hinduism and is the law of cause and effect, in which each individual creates his own destiny through his thoughts, words and deeds. If we do a good deed, then we will in turn receive positive consequences or blessings. Bad actions or deeds will have the opposite effect. Essentially it is the old adage, “What goes around, comes around.”

Often the Law of Karma isn’t accounted for in this life, but it impacts your future life. It traps individuals in a cycle of reincarnation, each successive life better or worse dependent on your karmic performance of the previous life. Those who built up bad karma may be born into a lower caste (class) or even as an animal or an insect. It may take many more lifetimes of suffering before they are again born as humans.

Selfless acts and thoughts as well as devotions to the Hindu god(s) help one to be reborn at a higher level.

A Hindu’s condition of suffering helps them to atone for the evil they have committed in their previous life. For this reason, charity is almost unheard of in the religion. If someone is downtrodden, it may be more beneficial to leave them be, as their suffering state may give birth to a better life for them next time around. To ease their suffering now, might in fact hinder their chances at a better life next time. (You can see why there aren’t many prosperity preachers in Hinduism.)

The process of successive reincarnated lifetimes is called transmigration.

Nirvana is the supreme state free from suffering and individual existence. It is a state often referred to as “self realization” or “god realization”. It’s the ultimate religious goal of all Hindus. The attainment of Nirvana breaks the otherwise endless rebirth cycle of transmigration. Hindus call this nirvana “eternal bliss”. However, no one can describe in words what nirvana is. It can only be experienced directly.

The Concept of God in Hinduism

Hinduism is monotheistic — sort of. It recognizes one supreme deity known as Brahman, or ultimate reality. Brahman is the universe and all it contains. Essentially, god is everything, and everything is god, a belief that is known as pantheism. To take the concept further — If “everything” is god, then that would include you and me. Unlike Christianity, Hinduism has no concept of a personal and knowable God, who is separate from his creation. To a Hindu, Brahman is simply all that exists.

To really confuse the issue, Hinduism also has a polytheistic side. It includes aspects of worship of multiple deities (although they are all considered manifestations of the one ultimate reality). Brahman is personalized as three separate entities: Brahma (the Creator), Vishnu (the Preserver), and Shiva (the Destroyer). Most Hindus also worship Krishna and Rama, two of Vishnu’s ten incarnations, or avatars. In addition to these major gods (incarnations of Brahman), forces of nature, animals, and humans can all be deified, giving Hindus a pantheon of 330 million gods and goddesses to worship.

Not the Jesus of the Bible. Not the true Jesus. Hindus are very happy to consider Jesus to be ONE of the many avatars or incarnations of the impersonal Brahman, however, they do not accept Christ as the ONLY incarnation of God. In no sense does Hinduism recognize Jesus as the unique Son of God, Co-equal, Co-eternal and Co-reigning within the Triune Godhead of the Bible.

Sin and Salvation in Hinduism

There is no concept of Sin against a Holy God in Hinduism. To a Hindu, man’s biggest problem is his ignorance that he is in fact “god” himself.

In Hinduism, since Brahman is all that exists, everything else is ultimately an illusion. Our material world, physical bodies, and our personal existence are all illusions. In essence our ignorance in Hinduism is equivalent to the “fall of man”. We have forgotten that we are part of Brahman, and have attached ourselves to the desires of individual self. It is these desires and their consequences that bring suffering, and that subject us to the Law of Karma.

Although there is no concept of “salvation”, the goal is to remove the karmic debt and end the cycle of rebirths. When one overcomes their ignorance of their own divinity and a detachment from self (an illusion), the individual can be released from personal existence and disappear into the impersonal Brahman. This ‘liberation’ from the wheel of life is called moksha or nirvana as we mentioned before. Freed from their physical, personal existence, individuals also become free from all pain and suffering, and become like a single star within all the universe that is Brahman.

There are three paths to achieve this liberation from the wheel of life.

As just mentioned, yoga is one of the “Ways of Knowledge”. Yoga is one of the classic systems of Hindu philosophy that practices certain disciplines to achieve freedom from the limitations of the flesh and lead to the fulfillment of knowledge. The goal of yoga is not to achieve peace within, channeling, or the working of miracles, but the acquirement of knowledge. In fact, the yoga doctrine insists that physical and mental training should be used only as a means to spiritual needs.

Yoga practice forms a ladder to perfect knowledge through eight stages: self-control, religious observance, postures, regulation of the breath, restraint of the senses, steadying of the mind, meditation, and profound contemplation.

The philosophy and practice of yoga have been primary tools of Hindu missionaries to North America since Indian priest and mystic Swami Vivekananda introduced yoga to the West at the World’s Fair in 1893 in Chicago. 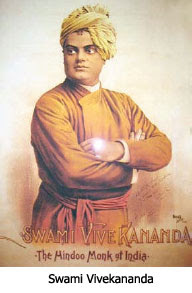 Swami Vivekananda is attributed with the idea of combining the theory of “evolution of the soul” with his teachings of Hinduism. Instead of working out one’s karma by becoming a grasshopper, lizard or human in progressive lives, he taught an “evolution of the soul” whereby the individual continues in an evolutionary process to “manifest the god within” — from slime to divine. This new brand of Hinduism was undoubtedly born because it was thought that North American’s would not buy into the traditional Hindu concepts of reincarnation. It would seem that pride has always plagued us North Americans. Not many westerners could imagine they would ever come back as a lower form of life.

Another fellow of interest is Paramahansa Yogananda. Another Hindu missionary, this time in 1920 he was welcomed warmly by elite circles of that day. He started the Self-Realization Fellowship in Los Angeles which still exists today. He chose to demonstrate that yoga was completely compatible with Christianity. Wearing a cross, he came to America with a Hindu religious text, the Bhagavad Gita, in one hand and the Bible in the other. He reasoned that yoga was the binding force that could connect all religions together. He wrote a book titled, “The Second Coming of Christ: The Resurrection of the Christ Within You”. Essentially it was Yogi Paramahansa’s commentary on the four Gospels, or as the cover of the book reads, “A Revolutionary commentary on the original teachings of Jesus.” 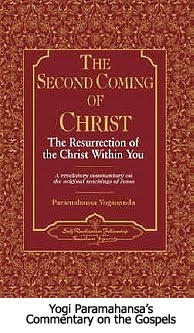 Right now for any evangelical Christian who seeks truly after the heart and mind of God, warning bells should be ringing loudly in our heads. What on earth would a Hindu guru have to reveal about the teachings of Jesus.

Was it not Jude who warned us to keep to the original faith?

“Beloved, while I was very diligent to write to you concerning our common salvation, I found it necessary to write to you exhorting you to contend earnestly for the faith which was once for all delivered to the saints.” – Jude 1:3

Take careful note of Jude’s words, “was once for all”. The implications of these words are that the canon is closed. There is no special revelation beyond those that the bore the approval of the apostles. Any teaching, new or old, must align itself perfectly with Scripture, or that teaching is deemed false. God is not the author of confusion. He invented language and wanted us to understand His Word as delivered.

“Knowing this first, that no prophecy of Scripture is of any private interpretation, for prophecy never came by the will of man, but holy men of God spoke as they were moved by the Holy Spirit.” – 2 Peter 1:20-21

How unfortunate it is that the modern Church does not recognize this most essential fact.

In the last part we will look at the reasons why yoga is definitely not for Christians.