Jesus the Lamb and Lion: The Suffering Lamb 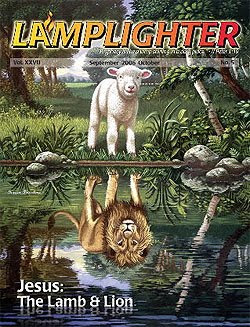 The concept of a Messiah as a suffering lamb is rooted in the Passover feast and the requirement that each family take an unblemished male lamb and sacrifice it as atonement for their sins. When the Passover was instituted, while the children of Israel were still in captivity in Egypt, each family was required to put the blood of a lamb on the doorpost, and this served as a sign for the death angel to pass over that particular house and spare the life of the first born child.

We know, of course, that such a sacrifice was insufficient because Hebrew 9 says that the blood of animals is insufficient to purify anyone from sin and that our purification from sin can come only from the blood of Christ who through the eternal Spirit offered Himself without blemish to God. The blood of animals could not atone for sins, but the sacrifice was still important because the sacrifice was an expression of faith, and as such it provided a temporary covering of their sins. It did not forgive their sins, but it provided a temporary covering. The full forgiveness would have to await the sacrifice of a perfect man — the Lamb of God. That’s the reason that the Old Testament saints when they died did not go to Heaven.

The saved could not go to Heaven and live in the presence of a holy God because their sins were only covered by their faith and they were not forgiven. They had to wait for the sacrifice of the perfect Lamb of God. When Jesus was sacrificed on the cross, we are told that His Spirit descended into Hades and we’re told in 1 Peter 3 that He made a proclamation. It does not tell us what the proclamation was, but we can pretty well guess what it was — that the blood of the perfect Lamb of God has been shed.

I can only imagine the roar of celebration that must have come from the saints who had been waiting all those years for that glorious news. Now their sins were not only covered, their sins were forgiven and they could finally go to Heaven. I think this is the meaning of a rather enigmatic passage that is found in Ephesians 4:8 which says, “When He, Jesus, ascended on high, He led captive a host of captives and He gave gifts to men.” Jesus emptied Paradise from Hades and he took Paradise to Heaven. In other words, when Jesus ascended to Heaven, he took Paradise with Him.

Now, ever since the cross, when a believer dies his spirit goes directly to Heaven. Everything was changed by the cross. Today, when a person puts his faith in Jesus Christ as Lord and Savior and is born again, when that person dies His spirit goes directly to Heaven and not to Hades. It’s a different situation after the cross than before the cross because when we put our faith in Jesus Christ today our sins are not only forgiven, they are forgotten. They are not just covered, they are washed away. Praise God! And, therefore, when we die we go immediately to Heaven. The blood of Jesus God’s son cleanses us from all sin.

We find in Isaiah 53 a tremendous statement about Jesus as the suffering lamb. This is the greatest of all the suffering lamb passages in the Old Testament. In Isaiah 53:7 Isaiah prophesied that the Messiah would be like a lamb that is led to slaughter and like a sheep that is silent before its shearers. He would not open his mouth.

Further in Isaiah 53:10-11, he stated that the Messiah would be rendered as a guilt offering and as a result of the anguish of Jesus’ soul, He would justify the many. In response to this prophecy, many, many years later, when Jesus appeared at the Jordan River to be baptized of John the Baptist, John cried out, “Behold the lamb of God who takes away the sins of the world.” And, using the same imagery, the apostle Peter wrote, “We have not been redeemed with perishable things, like silver and gold, but with precious blood as of a lamb, unblemished and spotless, the blood of Christ.” The apostle Paul summed it up best of all in 1 Corinthians 5:7 when he said, “For Christ, our Passover lamb, has been sacrificed.”

In the next installment of “Jesus the Lamb and Lion,” we will look at Jesus as the Conquering Lion.