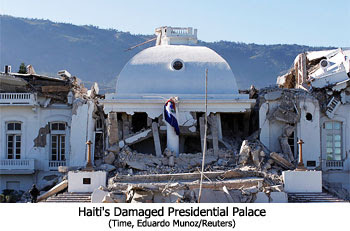 On Tuesday, January 12, 2010, the country of Haiti was rocked by the most devastating earthquake in nearly 200 years.

The massive magnitude-7.0 quake flattened the capital of Port-Au-Prince, leveling everything from neighborhoods, hospitals, schools, cathedrals, the main prison and even the president’s palace.

An uncountable number of people lay buried among the rubble, from public figures such as the head of the U.N. peacekeeping mission and the Roman Catholic archbishop, to little children in the arms of their parents. The number of dead cannot even begin to be known until the rescue crews gathering from all over the world arrive and begin their rescue efforts, but the numbers could very well be as Haitian Leading Sen. Youri Latortue told the Associated Press (“Thousands feared dead in Haiti quake; many trapped,” Tues., Jan. 13, 2009, Jonathan M. Katz) — that 500,000 could very well be dead.

“Death was everywhere in Port-Au-Prince. Bodies of tiny children were piled next to schools. Corpses of women lay on the street with stunned expressions frozen on their faces as flies began to gather. Bodies of men were covered with plastic tarps or cotton sheets…. Parliament has collapsed. The tax office has collapsed. Schools have collapsed. Hospitals have collapsed… Even the main prison in the capital fell down.” 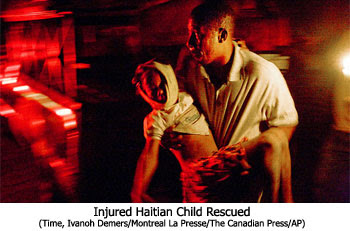 As horrible as the tragic earthquake in Haiti has been, it hasn’t been the first major earthquake in 2010. Just a week earlier the Solomon Islands were rocked with a series of quakes, the greatest a magnitude-6.2. The U.S. Geological Survey’s Latest Earthquakes M5.0+ in the World website reports a long series of 5.0 or higher earthquakes, ranging from Tonga to Java to Taiwan to Haiti and to just off the California coast (a magnitude-6.5).

God also uses them as remedial judgments to call nations to repentance. Haiti is mired in occultism and spiritism, resulting in it being the poorest and most spiritually oppressive nation in the Western hemisphere. 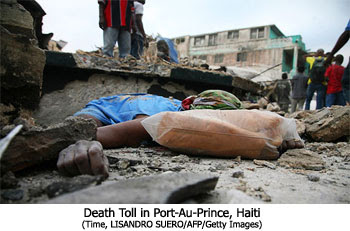 Because of our rejection of God and His moral standards, we tragically are the ones truly responsible for these natural disasters. As long as the nations continue to reject God, He will use natural disasters to yell — “I love you! Repent and come back to me!”

We are tempting Him to move us from judgment to destruction. Our God is so merciful. He is patiently sending us one natural disaster wake-up call after another because He never pours out His wrath without warning. And the greatest “coming wrath” already visible on the far horizon is the 7-year Tribulation (1 Thes. 1:10), which will include two of the worst earthquakes the world will ever experience.

And so, we each need to repent individually for our own rebellion and selfishness. We need to repent nationally for removing God from our society, for our murders from the womb to the elderly, for our obsession with sexual promiscuity, for our fascination with the occult, and for our lack of support for Israel’s right to exist. We need to accept Jesus as our Savior, the only way we will be rescued from the “coming wrath.”

Note: If you would like to join Lamb & Lion Ministries in contributing to the relief efforts in Haiti, we recommend both Samaritan’s Purse and the Baptist Haiti Mission. Continue in prayer that the relief efforts will greatly spread the hope of Jesus Christ and free Haiti of the hold Satan has on it.