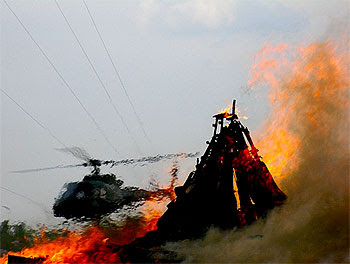 Ezekiel 39:1-8 describes the tremendous aftermath of the foiled Gog-Magog invasion. Before the massive coalition army can fire a single shot from their launching point on the mountains of Israel, God steps in and supernaturally devastates not only the invaders but also their homelands as well. Russia, Iran, Turkey, the ‘Stans, Sudan, Lybia and other Muslim nations are reduced to a wasteland, and only one-sixth of their combined army remains, exiled to Siberia (Joel 2:20).

For the nearly three-quarter million to a billion corpses left by God’s hand to rot in the land of Israel, the biggest cleanup process in all of history is ready to begin. Ezekiel 39:9-20 unearths the gory funeral purification ritual.

“9’Then those who live in the towns of Israel will go out and use the weapons for fuel and burn them up—the small and large shields, the bows and arrows, the war clubs and spears. For seven years they will use them for fuel. 10They will not need to gather wood from the fields or cut it from the forests, because they will use the weapons for fuel. And they will plunder those who plundered them and loot those who looted them, declares the Sovereign LORD.'”

There will be so much armament left over by the dead Gog-Magog armies that Israel will be able to use the very same weapons meant to destroy them as fuel.

Now, it’s left to wonder in a modern day scenario how one burns a machine gun. What good are burning bullets? Who would be crazy enough to throw RPGs into a fire?!

Some have pointed out that Russian tanks are made out of something called lignastone, a composite that burns so hot that one can actually burn a tank as fuel. Can you just picture two Jewish men sitting by a roaring fire and one asks the other, “Moshe, go throw another tank on the fire,” that kind of scenario? That’s hard to picture, but what is very reasonable is that the fuel could be taken out of the tanks and other warcraft and be used as fuel.

Another source of fuel from weapons could be nuclear in nature. Wouldn’t it be ironic and so typical of God that Israel could end up using the nuclear material Iran is so hot to develop right now into a bomb?

Ezekiel is writing 2,600 years ago and so may not have understood the details of what exactly is being burned. And, indeed, there could be many wooden weapons to go along with all the metal-based weapons. But, what we do know for sure is that the people of Israel will make fuel out of the hordes weaponry and consume it for seven whole years.

In essence, the plunderers — Gog and his forces — will provide their own armaments to be plundered by the Israelis. Bitter irony!

“11’On that day I will give Gog a burial place in Israel, in the valley of those who travel east toward the Sea. It will block the way of travelers, because Gog and all his hordes will be buried there. So it will be called the Valley of Hamon Gog. 12For seven months the house of Israel will be burying them in order to cleanse the land. 13All the people of the land will bury them, and the day I am glorified will be a memorable day for them, declares the Sovereign LORD. 14Men will be regularly employed to cleanse the land. Some will go throughout the land and, in addition to them, others will bury those that remain on the ground. At the end of the seven months they will begin their search. 15As they go through the land and one of them sees a human bone, he will set up a marker beside it until the gravediggers have buried it in the Valley of Hamon Gog. 16(Also a town called Hamonah will be there.) And so they will cleanse the land.'” 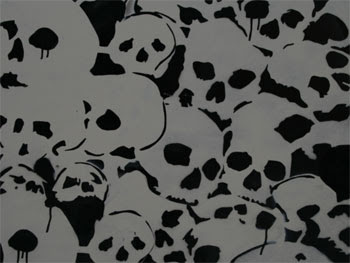 Can we calculate how many invaders there are from the time indicators in this section of verses? These passages state that it will take Israel seven months to bury all the dead invaders. Statistically, today there are between five to six million Israelis living in Israel. Let’s say just a million of them go out and start burying bodies. Take one million burying for seven months, subtracting the Sabbath days, and we can estimate that if they each buried just one body per day — 180,000,000 bodies would be buried! If each buries two a day, the invaders would number 360,000,000 bodies. But, verse 13 tells us that “all the people of the land” will go out to bury the dead, so 360 million is highly conservative. We can conclude then that the hordes of Gog are truly massive, and yet God leaves alive only one-sixth of that impressive number.

While the Israelis cleanse the land from the defilement of dead bodies, they’ll create a new mass grave in the Valley of Hamon Gog (“the hordes of Gog”), a new name given to an existing valley most likely down by the Dead Sea. Also, like the mining towns of early American history that went up almost overnight in their search for gold, a town will quickly be built called Hamonah to manage the burying process.

The Israelis act as a sort of priesthood, going out and cleansing the land. Throughout the Bible God demonstrates that He likes ceremonial cleanliness and holiness. With the newfound faith in God, the Jews will seek to follow the cleanliness laws and rituals once more.

“17Son of man, this is what the Sovereign LORD says: Call out to every kind of bird and all the wild animals: ‘Assemble and come together from all around to the sacrifice I am preparing for you, the great sacrifice on the mountains of Israel. There you will eat flesh and drink blood. 18You will eat the flesh of mighty men and drink the blood of the princes of the earth as if they were rams and lambs, goats and bulls—all of them fattened animals from Bashan. 19At the sacrifice I am preparing for you, you will eat fat till you are glutted and drink blood till you are drunk. 20At my table you will eat your fill of horses and riders, mighty men and soldiers of every kind,’ declares the Sovereign LORD.” 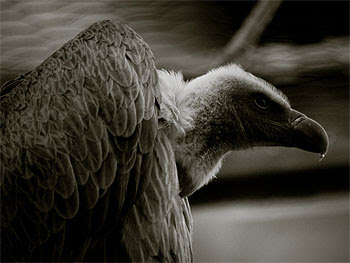 God calls together every kind of animals to participate in what is significantly called a “great sacrifice.” While Israeli clean-up crews work tirelessly to bury the dead, the birds and animals will feast on the sacrifice of the Gog-Magog armies. These animals will gorge themselves on princes and mighty men, the best of the best of their soldiers, from the highest official to the lowliest of conscript — they become nothing. The hordes of Gog that were wiped out instantly by God have become nothing more then bird food, fulfilling their decimation and abject humiliation.

For the nearly three-quarter million to a billion corpses left by God’s hand to rot in the land of Israel, the cleanup process is under way. But, a new process is in the making. A national reawakening to the God of Abraham, Isaac and Jacob commences. In the next part of this “Impending Invasion of Israel” series we’ll study Ezekiel 39:21-29 and witness the greatest Jewish revival since King Josiah (2 Kings 23:25).