Why a Defending the Faith Conference?

We are living in a time when the Christian faith is being attacked as never before in the history of this nation. It seems like there is a new assault every month in the form of blasphemous portrayals of Jesus or mockeries of the Bible.

Even worse than the pagan attacks are the ones coming from within Christianity as apostasy in the Church continues to grow exponentially.

Who would even have dreamed 20 years ago that churches today would be ordaining homosexuals and performing same-sex marriages? Or that Christian leaders would be challenging the fundamentals of the faith such as the virgin birth, the miracles of Jesus, His resurrection, and His promise to return?

I can understand the pagan attacks. I can even understand their increasing frequency and intensity. After all, Satan knows Bible prophecy (Revelation 12:12), and he realizes that Jesus is about to return any moment.

What is really sickening to me are the attacks from within Christianity. I’m not surprised by them because the Bible prophesies over and over that a great apostasy will occur in the Church in the end times (2 Thessalonians 2:3). But still, I find them disheartening.

Eric Barger, one of Christendom’s leading defenders of the faith, told me recently about a worship service in the Seattle area that featured Brian McLaren, the leader of the apostate Emergent Church Movement. McLaren challenged the Church’s traditional interpretation of John 3:16 as applying to personal salvation. Instead, he applied it to the earth, arguing that when it says, “God so loved the world,” that it was talking about the cosmos and the environment! His altar call consisted of inviting people to come forward and stick their hands in barrels of dirt and make a commitment to save the planet.

Yet this man, who denies the existence of absolute truth, claims to be an Evangelical and has been invited to speak at places like Dallas Theological Seminary and Abilene Christian University. It appears that discernment is dead.

This is the reason I decided to focus our annual Bible conference this year not on prophecy but on apologetics — the defense of the faith. 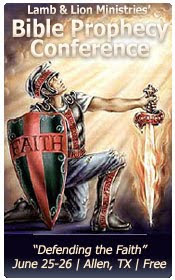 Public opinion polls conducted by the Barna Group reveal that professing Christians in America today do not know the fundamental doctrines of Christianity nor do they know how to defend them. Even worse, those who think they know what they believe confess that they believe things directly contrary to Scripture.

Much of this ignorance is due to the fact that the Word of God is not being proclaimed from the pulpits of American churches. It has been replaced by psychological ditties about the principles of self-improvement.

Our conference this year is going to focus on the fundamentals of the faith and how to defend them. I urge you to attend and to invite members of your church to come with you. It is free of charge, but you do need to register.

Following the conclusion of the conference on Saturday afternoon, we are going to host a banquet to celebrate the 30th anniversary of this ministry. The featured speaker will be Ed Hindson, and he will speak on a topic related to Bible prophecy. The banquet will cost $35 per person.

Please plan to be with us for these events. Work them into your summer vacation time. I hope to see you in June!