The most frequently requested Christ in Prophecy television show episodes on Revelation have been pulled from the vault and re-released!

We’ll continue on in our journey through the great book of Revelation in Chapters 2-3. Feel free to watch, listen, or read along by clicking one of the icons below.

[Read Chapter 2 in the NASB version via Biblegateway.]

Dr. Reagan: As we move to chapters two and three, the focus shifts from Jesus the Glorified One to Jesus the Overcomer, who is encouraging His Church to persevere and overcome with Him.

Chapters two and three present us with seven letters written by Jesus to seven churches. These are very interesting letters because first of all they are letters to seven real churches located in the area we know today as Turkey. But these churches were selected for a reason, and that’s because they are representative of all churches existing at that time and today.

The first church addressed is Ephesus, which was a legalistic church. It was a church that dotted the I’s and crossed the T’s, but it had lost its love. The church at Ephesus is representative of the apostolic period from 30 A.D. to 95 A.D. when the church was concerned about organization and doctrine to the point that it became legalistic.

In verse 12 we have the church of Pergamum, which is the liberal church. It’s the church that doesn’t care anything about doctrine — it’s the opposite of Ephesus, it embraces everyone. This apostate church existed from 312 A.D. to 590. This period developed after the emperor Constantine was converted and the church and the state were welded together. As is always the case in such unions, the state began to corrupt the church.

Then, in verse 18 we have the church of Thyatira, which is the pagan church, the church that is full of cultic practices. The church at Thyatira represents the dark pagan period from 590 A.D. to 1517 when the Papacy developed and the church became full of Babylonian occultic practices.

[Read Chapter 3 in the NASB version via Biblegateway.]

Dr. Reagan: Chapter three begins with the church of Sardis, which is representative of dead churches. It has a reputation of being alive, but in reality it is dead.

When we come to the reformation in 1517 we think of it as a time of life, but you know it was really only partially so. The Reformation produced the Protestant state churches of Europe, churches that had a reputation for being alive but were really dead because of their union with the state. So the church of Sardis, the dead church, with a reputation for being alive represents the post reformation period from 1517 to about 1750.

The next church mentioned — the church of Philadelphia — is the church that we would all like to be a member of because it is the alive church, for which Jesus has no criticism whatsoever.

The opposite of Sardis is the church at Philadelphia. It represents the period of church history from about 1750 when the church began to send missionaries out all over the world, until about 1925 when the German school of higher criticism invaded seminaries worldwide and destroyed many people’s faith in the Word of God.

And then, finally we have in verse 14, the church of Laodicea. In many respects it is the most pathetic of all the churches because it’s the worldly and apathetic church, the church that is “neither hot, nor cold” because it could simply care less.

The church of today is represented by the church of Laodicea, a church that says to the world, “I am rich, I have become wealthy and have need of nothing.” But Jesus says to that church, “You are wretched and miserable, and poor and blind and naked.” It is a worldly, apathetic, apostate church that will not even let Jesus in the front door.

Now, as I said, these seven churches are representative of every kind of church that exists today. You will find your church in one of these seven, or in a combination of them.

I also think they are also representative of seven different kinds of Christians. So I want to ask you something. Are you a legalistic Christian, persecuted Christian, liberal, worldly, are you dead, are you alive, are you apathetic?

One final thing about these letters, please note that each of these seven letters end with promises to overcomers. I would exhort you to go through and make a list of them. And you know what? You will find a total of 13 promises. Look for example at Revelation 2:26. It says, “He who overcomes and he who keeps my deeds until the end, to him I will give authority over the nations, and he shall rule them with a rod of iron.” That’s just one of the 13 promises. His promise is that the redeemed will rule over the nations of the Earth and that of course is speaking about the millennial reign of Jesus Christ. There are 12 other marvelous promises, and all of them are made to overcomers.

Are you an overcomer? Are you an heir of these 13 wonderful promises? An overcomer is defined in I John 5:5 as, “He who believes that Jesus is the Son of God. Such a one,” John says, “overcomes the world.”

In the next part on this series on Revelation, we’ll get our expert teachers together to discuss Chapters 1-3. 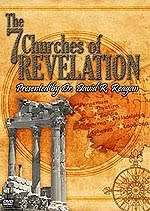 The 7 Churches of Revelation DVD
The first of five video sessions presents an overview of all seven letters which Jesus dictated to churches which were located in Asia Minor, known today as the modern nation of Turkey. The overview focuses on the thirteen promises that the letters make to “overcomers.” The subsequent session features the Isle of Patmos, where Jesus appeared to the Apostle John, and the seven churches which Jesus wrote to. Each lesson included emphasizes how the letters apply to the Church today, as well as to individual Christians.