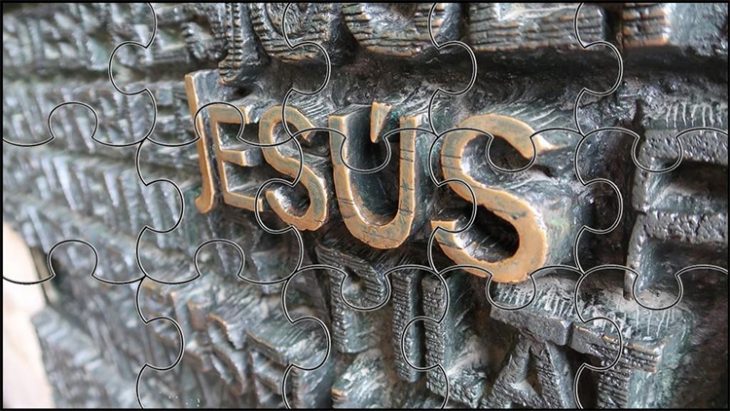 The founder of Lamb & Lion Ministries, Dr. David Reagan, has often spoken about critics of Bible prophecy referring to Revelation as a “Chinese puzzle.” A Chinese puzzle is a mystery so intricate and challenging as to be unsolvable. Or, if it can be solved, it is only by sheer luck or a generous supply of hints.

We’ve all seen wooden and metal puzzles that follow this model. They are fun to play with for a while, but quickly grow frustrating to anyone who does not already know the trick to solving the mystery.

God’s revelation of the end times — including the timing of Jesus return and the events of the Tribulation — can appear to be an unsolvable mystery to those who are undiscerning. But for those who have put their faith in Jesus Christ, understanding is guaranteed.

Keys to Working a Puzzle

During the enforced “social distancing” of the COVID-19 crisis in early 2020, my family passed the time several evenings by working puzzles. We worked 500, 1000, and 2000-piece puzzles, all while enjoying each other’s company. Some puzzles were more difficult than others, but all of them were solvable.

I’ve loved puzzles since I was a little boy. While working those puzzles recently, I reflected on the way we work puzzles. Typically, we find all the edge pieces, with special emphasis placed on finding the corners. Most people assemble the entire outer edge of the puzzle, then work on portions that have high contrast or distinguishing patterns and colors. Finally, we’ll fill in all the “tweener” areas. Every puzzle-worker knows how frustrating it can be to get to the end and discover that pieces are missing.

Let me say from the outset that the Word of God is not an unknowable puzzle. God wants to communicate with us, and He knows how to do so. And you do not need a degree in hermeneutics to understand His Word. From His first revelation to His last, He communicated in a manner that can be understood. He even sent His only Son Jesus, is so that knowing Him, we might know God (John 17:3).

Tim Moore: The Word of God is not an unknowable puzzle. #God wants to communicate with us, and He knows how to do so. #Bible Click To Tweet

Having said that, there are mysteries that will only be fully understood in the fullness of time. Likewise, Jesus communicated in such a manner that only those who “hear His voice” would discern the full meaning of His teaching. Regarding His tendency to speak in parables, He said:

To you it has been granted to know the mysteries of the kingdom of heaven, but to them it has not been granted. For whoever has, to him more shall be given, and he will have an abundance; but whoever does not have, even what he has will be taken away from him. Therefore I speak to them in parables; because while seeing they do not see, and while hearing they do not hear, nor do they understand. In their case, the prophecy of Isaiah is being fulfilled, which says, “You will keep on hearing, but will not understand; you will keep on seeing, but will not perceive” (Matthew 13:11-14).

Jesus went on to tell His disciples that they were blessed because their eyes could see and their ears could hear — not merely the physical sights and sounds, but the meaning of all He was revealing. He said, “truly I say to you that many prophets and righteous men desired to see what you see, and did not see it, and to hear what you hear, and did not hear it” (Matthew 13:16-17).

Satan knew the writings of the Old Testament prophets, but still did not discern the manner of Jesus’ coming, ministry, death, and resurrection. How much more limited is human understanding without enlightenment by the Holy Spirit. But when a person places their trust in Jesus as Savior and Lord the Holy Spirit blesses them with understanding.

Speaking to His disciples before His death Jesus said (John 16:12-14):

I have many more things to say to you, but you cannot hear them now. But when He, the Spirit of truth, comes, He will guide you into all the truth; for He will not speak on His own initiative, but whatever He hears, He will speak; and He will disclose to you what is to come. He will glorify Me, for He will take of Mine and will disclose it to you.

Understanding the Things to Come

So when we consider end times prophecies — all those things that must soon come to pass — some mysteries remain. But, there are clear outlines that allow discernment for those who have the Holy Spirit. And, we are promised in Scripture that in the end times many previous mysteries will be made clear (Daniel 12:8-10). As a matter of fact, Paul said that even the day of the Lord should not overtake us like a thief (1 Thessalonians 5:1-6).

Using the puzzle analogy, Jesus has given us the outline — including the corner pieces — and provided enough contrast to recognize clear patterns. He does not come out and provide a narrative, any more than He did 2,000 years ago — lest even those without eyes see spiritual matters would gain understanding.

In Matthew 24, Jesus provided a clear outline of the signs of His return. He foretold false messiahs, wars and rumors of wars, natural disasters, and pestilence. He described a descent into ungodliness and declared that these things will come as birth pangs. That is to say, that they will increase in frequency and intensity until the end.

Jesus also warned of the terrible period known as the Great Tribulation which must precede His glorious return to earth. Matthew records His emphasis on watching for the fig tree to blossom — widely understood to be a prophetic reference to Israel and indicating the season of His return. Jesus concluded what we know as Matthew 24 by admonishing those who trust in Him to be on the alert (Matthew 24:33,36,44).

The Book of Revelation

Turning to the book of Revelation, we are also given an outline — with “corner pieces” clearly identified to help us place all the prophecies in a frame of reference. In chapter 1, John sees Jesus Christ, who appears in the form recorded in Daniel 7:9-14. Placing His hand on John, Jesus said, “Do not be afraid, I am the first and the last, and the living One; and I was dead, and behold, I am alive forevermore, and I have the keys of death and of Hades” (Revelation 1:17-18).

In Chapters 2 and 3, John records Jesus’ dictated letters to seven churches — things which are. Then, in Chapter 4, John makes this transitional statement, “After these things I looked, and behold, a door standing open in heaven, and the first voice which I had heard, like the sound of a trumpet speaking with me, said, ‘Come up here, and I will show you what must take place after these things'” (Revelation 4:1).

Within the next 18 chapters, John faithfully recorded all he saw. With periodic interludes of reflection and reassurance, Revelation foretells “things to take place after these things.” The narrative unfolds with bold episodes that can be understood if they are interpreted according to their plain sense meaning. For instance, John records that 144,000 sons of Israel — 12,000 from every tribe — will be sealed to serve God. That prophecy is clear unless we spiritualize it to mean anything but 144,000 Jewish men.

The series of calamities known as the Seal, Trumpet, and Bowl Judgments also offer high contrast and a distinguishing pattern to understand. As “the winepress of the fierce wrath of God” is squeezed out in consecutive waves, a few will be motivated toward repentance and turn to Him for salvation (Revelation 7; 19:15). But most will shake their fist at God and curse Him, sealing in their eternal fate of damnation (Revelation 11). Most importantly, Israel will come to the end of itself and turn to Jesus as Messiah (Revelation 1:7; Zechariah 12:10).

Puzzling Parts of the “Puzzle”

Like individual components of a complex jigsaw puzzle, these various prophetic elements fit together in the flow of the narrative. Still, like an intricate but workable puzzle, there are certain portions of the prophetic panorama that remain veiled in mystery.

For example, the book of Ezekiel makes it clear that there is going to be a Russian-led invasion of Israel in the end times, called the War of Gog and Magog (Ezekiel 38 and 39). But, I do not know its precise timing — whether before or during the Tribulation.

Some scoffers point to such uncertainty and attempt to discredit the entire book of Revelation, or at least discount any effort to understand what it does reveal. But the broad strokes of Revelation are not difficult to understand. If you believe it is the true revelation of Jesus Christ — and take the time to study it — you will gain understanding.

It took my family several days to complete our 2000-piece puzzle. We searched repeatedly for several specific pieces before they suddenly jumped out at us. We found that some sections were easy to assemble, while others took much more time and effort. But we enjoyed both the challenge and the sense of accomplishment when we finished.

How many of us have encountered the same experience in our study of God’s Word? We can read a passage countless times, but then suddenly a truth will reveal itself and jump off the page into our heart. A passage or verse we’ve overlooked unexpectedly becomes the key to unlocking whole new treasures of blessing. I believe that will happen throughout our lives as we feed on Scripture and allow it to permeate our lives.

Why would we treat prophetic texts any differently? Some people avoid Revelation or any study of Bible prophecy because they are intimidated by the requirement to invest time and effort in understanding what God has revealed. They’ve heard that New Testament prophecy often references Old Testament passages, meaning that much reading and cross-referencing is required. But the same could be said of any aspect of Bible study: only those who dive into the meat of God’s Word receive the blessing of growing discernment. Speaking of those who prefer milk to meat, the writer of Hebrews said:

For everyone who partakes only of milk is not accustomed to the word of righteousness, for he is an infant. But solid food is for the mature, who because of practice have their senses trained to discern good and evil (Hebrews 5:13-14).

Regarding the necessity of reading and studying, I am reminded of the groans of some of the young high school students I’ve taught. When assigned a book to read, some chafe at the exercise altogether. The idea of investing time reading strikes them as burdensome and inhumane. Others eventually discover the joy of reading and gain new insights and perspectives.

Revelation is the only book of Scripture that contains a specific blessing for anyone who “reads and heeds the words of the prophecy of this book” (Revelation 1:3, 22:7). With that promise in mind, if you believe it is the true revelation of Jesus Christ, you will be given understanding.

More than anything, all you need is the belief that God’s revealed Word is true and a willingness to “read and heed” it. If you have that, the pieces of the puzzle will fall into place as the Holy Spirit guides you into all God’s truth and discloses it to you.

As we await the Rapture, one of the greatest blessings you will receive is a hopeful expectation to be caught up to be with Jesus Christ — and then an eager anticipation of His return in glory. Spurred toward urgent evangelism and holy living, you’ll be crying out, “Maranatha! Godspeed! Come quickly, Lord Jesus!”

Book of Revelation   Interpretation of Scriptures