We’ve been looking at Revelation 20 and life in the Millennium for those in glorified and those in earthly bodies. Our teachers have returned for a discussion on whether to spiritualize or not Chapter 20. 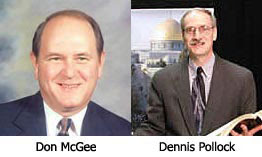 Dr. Reagan: Let’s begin our discussion with the Millennium itself. What would be your response to those people who claim that Chapter 20 should be spiritualized and therefore we are living in the Millennium right now?

Dennis Pollock: You wonder what gives a person the right to take the plain words of the Bible and turn them into symbolic things that aren’t really what it says. Now, there are cases where the Bible can get symbolic, but the general rule is this: “unless the words of Scripture are just patently absurd and just make no sense as read, it’s much safer to take them for the way that they say.” And, in this case, what is so absurd about Jesus reigning on the Earth for a thousand years? What is so crazy about that?

Some people say, “Well, it just doesn’t really fit with how I think it should be.” But, God I don’t think needs to ask you about that. There’s nothing absurd about that. If the Bible says that’s how God will do whatever, then why should we think differently?

Don McGee: One of the reasons we should think differently in the minds of some folks is that God only said it one time. A man told me that. He asked, “Why should we believe that there is going to be a Millennium because He only says it one time that He’s going to reign for a thousand years?”

Dr. Reagan: How many times does God have to say something?

Don McGee: That was my question. I answered, “Well, my friend, how many times does God have to say He’s going reign for a thousand years for you to believe that He’s going reign for a thousand years?” He replied, “Actually, this thing needs to be spiritualized.” So I asked, “What is your precedent for spiritualizing? How do you know when to spiritualize something and when to take something literally? What about the virgin birth? Are you going take that and are you going spiritualize it? Well, what about Jesus being born in Bethlehem? What about the great promise in John 14 where Jesus said I’m going to prepare a place for you and if I’m going do that I’m going come back and take you to be with me. Let’s spiritualize that. If we do that then we have no hope in his return.”

Dennis Pollock: Some people have even spiritualized the resurrection of Jesus. They said, “He didn’t physically resurrect, He just resurrected in spirit.” Well, that’s crazy! Typically, the farther away you get from a relationship with God, the more you tend to say, “I don’t really believe this. It’s got to be meaning something else.”

Dr. Reagan: Well, of course! The reason for that is because when you start spiritualizing Scripture, you become God. Scripture can mean anything you want it to mean, instead of what God intended for it to mean.

I don’t understand why people want to spiritualize Chapter 20. Why would somebody want to say that Chapter 20 doesn’t really mean what it says? When it says that Jesus is coming back and He’s going to reign over all the nations of the earth and the Earth will be flooded with peace, righteousness and justice as the waters cover the sea — hey, Man, I want to see that!

Don McGee: One of the reasons is because it doesn’t fit with their preconceived idea of theology. But, it goes a little bit deeper than that. What does it mean if I believed all my life that this did not mean what it said and then one day I’m confronted with the truth and I have to make a decision? What about all those people that taught me like my mom and my daddy and my grandma and my grandpa? Am I going to say that they’re wrong? I think that has a lot to do with it.

Dennis Pollock: That was exactly the argument against Martin Luther when he came out with the idea that we’re justified by faith and not by all kinds of sacramental works and so forth. They said, “You little monk, are you going to tell us for a thousand years the Church has been wrong? All these great thinkers and church leaders have been wrong for a thousand years and you’re right?” Well, he was right because he happened to believe what the Bible said literally. As long as you stay with the Bible, it doesn’t matter how many people have told you otherwise.

Don McGee: One of the reasons I think is because people who started with this, going back to Origen and Augustine and those guys, is because they came out of a Greek background where nothing could be taken literally, and nothing in the physical world especially. So, when they looked at the Millennium they said, “This can’t be because this has to do with the physical world, so it must mean something else.”

Dr. Reagan: Don, that’s a very important point and I’d just like to develop it a little bit because the Greek mind and philosophy taught that everything that is tangible and everything you can see is evil. The ultimate thing is for the spirit to be released from this evil body and for the spirit to be released into the spirit world. And so, when they began to read these verses and they says you’re going spend eternity in a new body on a new earth, they reply, “Oh, that can’t be! We’ve got to spiritualize that because nothing pure and holy can be in a body and on a new earth or whatever because the whole material universe is evil.” The Bible teaches the opposite. The Bible teaches that God created the whole universe in absolute perfection and has been corrupted by the sin of man, and one day God’s going to put it back the way He originally created it, and it’s going be perfected again.

Dennis Pollock: It shows us the danger of taking your presuppositions when you go to read the Bible and study the Word of God. You’ve got to lay those down. You’ve got to ask, “What does the Bible say?”

One of the safest things to do in studying Scripture is to ask yourself, “If I knew nothing about anything and I just picked up this book and read it, what conclusions would I draw?” It’s very difficult to do that, and you need to ask the Holy Spirit to help you to do it, but that’s the safest way to study the Scriptures.

These people are coming along with this preconceived idea that the physical matter is evil and it’s wrong, and that God surely is not going to have us in physical bodies — that’s just crazy! It’s crazy because of their presupposition that the Bible cannot mean what it says. Well, who says? The Bible does mean what it says.

In the next part, our teachers will continue on in their discussion of Revelation 20, addressing the binding of Satan during the 1,000 years.